A Passion For Primates

When a subject reaches out and grabs us, we have a deep need to know...everything.  We want to immerse ourselves in information.  For some people this desire lasts a lifetime defining everything they do.  For others it can last days, weeks or months, until the next intriguing topic occupies their every waking moment. 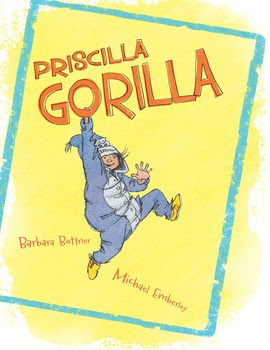 This is one of the absolute joys of working with children as an educator.  Their thirst for knowledge about what they enjoy has no end.  Priscilla Gorilla (A Caitlyn Dlouhy Book, Atheneum Books for Younger Readers, March 7, 2017) written by Barbara Bottner with illustrations by Michael Emberley follows the daily adventures of a gal who loves gorillas.

When Priscilla turned six,
her dad gave her a book called
ALL ABOUT GORILLAS.
They read it a million skillion times!

From that day forward nothing was done without focusing on gorillas.  No matter the type of special day at school, she managed to showcase gorillas.

On Events Day
she performed her own
original gorilla dance.

As a final act at the end of each day, wearing her gorilla pajamas, she wrote in her special journal dedicated to gorillas, the GORILLA GAZETTE.

Priscilla's fascination with gorillas stemmed from her belief in them always getting their own way.  She, unlike them, did tend to spend time in the Thinking Corner in Mr. Todd's class.  He did not understand why Priscilla would be teaching Lily the gorilla dance during nap time.

On class photo day all the students came dressed in their favorite animal costumes, prepared to give a report. The problem for Priscilla was she did not want to remove her gorilla pajamas for the photograph.  (She kept on talking about gorillas even when her time was up.)  Priscilla was not in the picture but she occupied the Thinking Corner...again.)

At home that evening Priscilla, always truthful about her school day, prompted comments from her father about information in her ALL ABOUT GORILLAS book.  She pondered his points and looked over her considerable treasury of gorilla portraits.  At school the next day two major viewpoints shifted prior to and during a school outing.  Step lively, Mr. Todd!


By the second sentence of this story readers are well aware of Barbara Bottner's adept ability to depict the true heart of her characters, especially the younger gals and guys.  She understands how children can become addicted to learning about one or many things.  Another enjoyable aspect of this story is the portrayal of the adults.  Her parents are supportive but offer advice when necessary.  This advice allows Priscilla to make her own decisions.  This is true, too, of her teacher Mr. Todd; he expands on the potential of a teachable moment.  The blend of narrative and dialogue is perfection.  Here is a sample passage.

Lily's lion roared at Priscilla's gorilla.
AAAHHOO!
RAARRHH!
Lily was invited to join Priscilla in the Thinking Corner.
You are my VERY best friend.
Priscilla whispered.
Sam said:
"You're both troublemakers!"
"I was just being a gorilla.
Nobody tells a gorilla
what to wear."
Priscilla told Sam.
"Gorillas don't wear anything," said Sam.


Rendered in pencil and watercolor the illustrations by Michael Emberley are brimming with exuberance.  The tilted display of Priscilla, wearing her gorilla pajamas, on the front of the dust jacket, is a hint of the liveliness found throughout the title.  The shades of primary colors invite reader participation.  To the left, on the back, Priscilla is striking an upstanding gorilla pose.  Behind her a huge gorilla mimics her stance.  This is shown on a canvas of white.

On the book case of white, the image from the back of the jacket is enlarged for the front.  On the left side, the back, Priscilla is swinging in the corner upside down.  Two of her classmates are standing on the ISBN looking upward.  The opening and closing endpapers are covered in a bright yellow (just like Priscilla's personality.)  Beneath the text on the title page, Priscilla is squatting on all fours on top of the kitchen counter.

White space is used superbly on every single page.  Michael Emberley shifts his illustration sizes in keeping with the pace of the narrative.  He begins with a marvelous two page picture of Priscilla and her father sitting together in an overstuffed armchair reading her book, ALL ABOUT GORILLAS.  He combines smaller images on one page and places a colorful background behind a special grouping of multiple pictures.  He breaks an understood frame with elements as when Priscilla is drawing gorilla pictures and they tumble from her workspace in the kitchen.

What readers will appreciate the most is the humor.  It is present in all the pictures in the details, facial expressions and body positions. (Notice the cat at home, the children's costumes, and how Priscilla draws.)  The looks on Mr. Todd's face will have children and adults alike roaring with laughter.  Believe me when I say you expect any illustration at any moment to come alive.

One of my favorite of many illustrations is when Priscilla is leaving her home on class photo day.  Out the open doorway and down the porch steps, the faint outline of a parked school bus is present.  Leaning against the door frame, her mother leans in to kiss Priscilla goodbye.  Priscilla is hanging from a ring over the door, wearing her gorilla pajamas and carrying her backpack.  To the right of the doorway are storage cubes, many filled with books.

Regardless of the time between readings of this book or the number of times you read it, I guarantee you will always laugh out loud.  Priscilla Gorilla written by Barbara Bottner with illustrations by Michael Emberley is a read aloud gem.  You might want to have animal hats ready for your listeners to wear.  It would be fun to have an animal report day as Mr. Todd does.  Make sure to have a copy of this title on your professional and personal bookshelves.

To learn more about Barbara Bottner and Michael Emberley and their other work, take a few moments to visit their websites by following the links attached to their names.  If you wish to view interior images, stop by the publisher's website.  Michael Emberley is the featured illustrator at author, reviewer and blogger Julie Danielson's Seven Impossible Things Before Breakfast on July 27, 2015. He talks extensively about the process for this particular book at Kathy Temean's Writing and Illustrating.
Posted by Xena's Mom at 11:15 PM