A Case Of Mistaken Identity

Living up to the expectations of others (or those we place on ourselves) is not easy.  Our personalities and physical traits are not always best suited to realize those beliefs. We receive coaching.  We practice and practice.  The truth is sometimes life has other plans for us.  We then find ourselves in positions farther from anything we thought probable or possible. 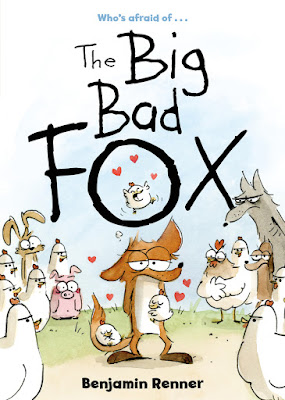 Given these circumstances, it opens the door for humor.  The Big Bad Fox (Who's afraid of...) (First Second, an imprint of Roaring Brook Press, June 20, 2017) written and illustrated by Benjamin Renner is one hundred eighty-seven pages of graphic novel hilarity.  Fox is not big.  Fox is not bad.  Fox is simply not your typical predator.

Fox leaves his den in the forest to try his luck at snaring a chicken at the local farm.  As he digs under the fence and crosses the barnyard he is warned by Dog and greeted by Pig and Rabbit.  The gardener pig and goofy rabbit keep a running commentary about the fox's progress.  Furious Fox has returned for the third time this week, a feisty chicken catches him and whacks him with a stick.

Dejected and hungry Fox trudges home with a basket of turnips courtesy of Pig.  Stating the obvious his mentor, Wolf, confronts him about his lack of fowl food.  Even with an additional lesson Wolf and Fox are at opposite ends of the meat-eater spectrum.  As a result of a statement made by Fox, Wolf devises a plan.  It's so simple, it's brilliant.

In the dead of night Fox steals three eggs, not without consequences of course.  He and Wolf will wait until they hatch and grow into nice plump chickens.  What a feast the duo will have!

Sitting on the eggs like a broody hen, Fox is shocked when they hatch and the chicks declare him to be their mommy.  One comedic situation after another ensues as Fox attempts to teach the little peepers how to be chickens.  They in turn decide since he is not a chicken, they must be foxes.  Meanwhile back at the farm and furious with Dog's lack of getting her eggs back from Fox, Chicken takes matters into her own wings.

After six months the state of affairs places Fox in a huge predicament.  His choices will have readers laughing like crazy.  Being a parent is sometimes difficult under the best of conditions but for Fox his problems escalate until he's soaring skyward...more than once.


The narrative told entirely in dialogue keeps readers captivated from beginning to end.  Benjamin Renner has a knack for conversations laden with comedy; contrasts between what should be and what is.  His short snappy phrases propel the plot forward from one episode to another with readers smiling nonstop.  Here are some sample passages.

Well, you know, that scary thing you do, like this
Grrowl! Argh!
Like that?
Well, yeah!  You know, with the bloodcurdling snarl or whatever?
Oh, I see.  You mean this?
GRROWL!!!
Yes, that's right!
That's the one.
I don't get it!  Why doesn't it work for me?  What's my problem?
I don't know.
Maybe it's because you look about as strong as an oyster.
Or because you have as much charisma as a dried slug in a jar of salt.
Also, you're about as ferocious as a geriatric tortoise.

You'll be happy.
I have good news.
Don't pretend you've already captured the fox!
Better than that.
TA-DAAAA!
MY EGGS!
You found them?!  But where were they?
Oh, uh...over there...hidden under that thing beside the...
My hero!
Oh, it's nothing.
What can I do to thank you?
Nothing, don't mention it!  It's my job.
Say, I have a question just one question.
Hmmm?
You didn't find these eggs in the fridge, by any chance?
WHAT?
How dare you even suggest it?  Are you saying I'd try to pass off grocery store eggs as yours?
Me, who's always looking out for you?
I'm hurt!  After all I've done to help you.
Please explain how I laid eggs with the "sell by" date printed on them.
Um...


One look at the front of the book case gives you a pretty clear indication of Fox's dilemma throughout this book; the chickens are furious, Pig and Rabbit are reluctant friends, Dog could care less about anything but himself, Wolf is disgusted and the three chicks love their mommy.  By placing the animals so as to frame Fox, it draws our attention to his unwelcome trouble.  The single chick laughing and dancing inside the "o" sums up their attitude perfectly.

To the left, on the back, Fox and the chicks are playing their Big Bad Fox game.  On the title page the image of Fox and the three chicks from the front is repeated.  Rendered in watercolor Benjamin Renner places a series of small images on a single page using white space as borders rather than employing panels.  For emphasis or to ask readers to pause a larger illustration may accompany half or a full page.

The large expressive eyes on the characters coupled with their exaggerated body movements contribute to the total fun on every page.  The specific area in an episode is depicted with the bottom color.  Time of day or weather darkening the sky is portrayed with a wash in gray or blue.  Renner's details add to the delight; as the seasons change the characters are shown wearing appropriate garb.

One of my many favorite illustrations is in Fox's den.  He has been sitting on the eggs so long cobwebs have formed all around him.  His posture is bent over with his nose nearly touching the ground.  His expression is a combination of grim determination and utter exhaustion.


No matter how many times you read The Big Bad Fox (Who's afraid of ...) written and illustrated by Benjamin Renner you will find yourself smiling and laughing out loud repeatedly.  The antics of all the characters mixed with their conversations are ridiculously wonderful.  The comedy has appeal for all ages.  You will want to have more than one copy on your professional bookshelves.  Make sure to have a copy for your personal bookshelves for when you need a light-hearted look at the twists and turns life can take.

At the publisher's website you can view eight pages of interior images at the beginning of the story.  Benjamin Renner talks about this title at Comics Alliance.  Benjamin Renner is interviewed at The Beat Comics Culture.  These characters and their story have been set to film.  Enjoy the trailer and short video in French.