When a dog and their human connect, it's indescribably beautiful.  If you are one of those humans, each day you look at your dog thinking how fortunate you are.  Surely this is a miracle this wild thing chooses to be with me. 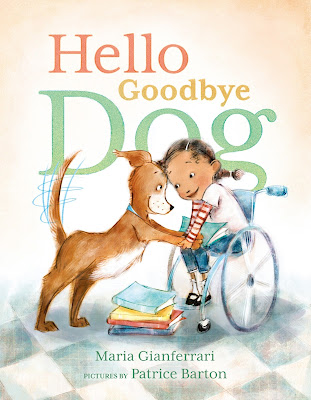 It's as if two separate souls become inseparable.  As a human, whether you realize it or not, you have become a member of a pack.  Your dog's loyalty is one of the most humbling experiences you will ever have.  Hello Goodbye Dog (Roaring Brook Press, July 25, 2017) written by Maria Gianferrari with illustrations by Patrice Barton is the story of two hearts full of love, the one for the other.

"Hello, Moose!" said Zara.
There was nothing Moose loved more
than hello.

In Moose's mind, this is unacceptable.  At the first opportunity Moose turns the goodbye into a hello.  An opened door has Moose zooming toward Zara's school.  Guess who's peeking in the window in Zara's classroom?

Zara's classmates are thrilled to have Moose with them.  Mrs. Perkins knows dogs are not allowed in school but Zara assures her Moose enjoys a good real aloud.  And he does.  Of course Moose has to say goodbye again.

Goodbye was being tied up in the backyard.

To a dog, a rope is an invitation to a good chew.

Moose manages to thwart every goodbye attempt replacing it with his own special brand of hello.  He demonstrates his ability to remain calm when being read a book with each subsequent visit until one goodbye too many has Moose creating mayhem as he plays catch-me-if-you-can.  Now Moose is stuck in a goodbye from which he cannot escape but Zara has a big idea.  When an idea comes from love, there are many winners.


When Maria Gianferrari writes about animals, especially dogs, her admiration and yes, love, of them shines in every written word.  The blend of narrative and conversation flows naturally.  One technique employed by Maria which encourages audience participation is each time Moose needs to say goodbye she uses the same phrase,

Moose put on her brakes.

This is followed by the names of the people who are assisting her to leave.  One extra person is added after Moose continues to appear at school.  This circles back to Moose at the story's conclusion.  In one particular part, Maria also increases the action with a series of rhyming words which are a read aloud joy.  Here is a sample passage.

Hello was a pat on the head.
"Dogs aren't allowed in school,"
said Mrs. Perkins.
"Moose will be quiet," said Zara.
"She loves story time."


The shared love between Moose and Zara glows on the front of the dust jacket (I am working with an F & G.)  Dogs like to place their paws on their humans to stay linked.  Zara is well aware of this.  If the locked glances do not signal their mutual affection, the wagging tail on Moose is a clear signal.  The stack of books between them is a clue of this dog's love of listening to books being read aloud.  The staggering and stacking of the title text along with the three color choices mirrors the stack of books.

To the left, on the back, with the same canvas Zara and Moose are pictured alone.  Zara is reading the book previously on her lap to Moose. Her tail is wagging in sheer happiness.  The opening and closing endpapers are dotted with a zigzag trail of paw prints.  It's a given you will break into a smile looking at the title page.  Moose is standing on her hind legs, tongue hanging out of a grinning mouth.  She is leaning on a tall pile of books with others scattered around her.

Each illustration is rendered in Patrice Barton's signature soft, delicate style.  She opens the story with a two page picture, alternating image sizes to correspond and elevate the text.  Her attention to details is exquisite; a boy draws Moose as Mrs. Perkins reads the story, the chewed rope remains attached to Moose's collar, Ms. Chen is shown eating her lunch with the students, and the trail of food to lure Moose out of the cafeteria is wonderfully typical.

You are going to want to hug all these characters; their animated faces and movements are simply charming. And Moose will have you laughing out loud.  Patrice portrays dogginess with a knowing skill.

One of my many favorite illustrations is a two-page picture. It's when Moose first visits the school looking in the classroom window.  The children are seated in groups around round tables. The looks are their faces at the sight of Moose are full of delight. Moose with her paws on the window sill only has eyes for Zara and she is downright ecstatic. Zara is pointing and smiling.  Mrs. Perkins, holding a book, looks astonished.  Believe me, from personal experience, this moment is depicted with perfection.

As you read this story your heart fills with laughter and lightness. Hello Goodbye Dog written by Maria Gianferrari with illustrations by Patrice Barton gives readers an up-close look at the desire of a dog to be with her human always and of her human's loving response.  Children and adults alike will enjoy seeing themselves in this story.  You will most definitely want a copy on your professional and personal bookshelves.

By following the links attached to Maria Gianferrari's and Patrice Barton's names you can access their websites to learn more about them and their other work.  You can view several interior illustrations at the publisher's website.  Maria Gianferrari has been interviewed at several sites during the past two years, KidLit 411, PictureBookBuilders, and Picture Books Help Kids Soar to name a few.

Maria was kind enough to answer a few questions for me.


I know you are a huge lover of dogs, Maria.  I think readers would like to know a little bit about you and your dog Becca.  Would you tell us how Becca came into your family?

Indeed I am, Margie!! It’s a bit of a magical story. Our friend was about to have a baby girl and my then four-year old daughter, Anya, and I were discussing names. The name “Rebecca” popped into my head. Needless to say, the baby was not named Rebecca, but the very next day I went on Petfinder.com and found our Rebecca—it was meant to be! Here’s the photo that made me fall in love with her. 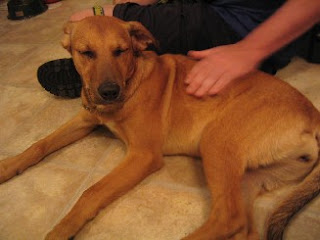 She was dumped near a highway in Chattanooga, Tennessee, and a lovely couple who already had many pets took her in and brought her to a rescue organization. She was eventually transported to NH where we picked her up. Incidentally, my next fiction book, Operation Rescue Dog (coming from Little Bee in 2018) is about a girl named Alma who meets her rescue dog, Lulu.

As a little girl I was always stumbling, tripping and I did fall down a few stairs more than once.  I was given the nickname Moose because I was not known for my agility.  In this book the dog is named Moose.  Why did you give this dog that name?

I love all dogs, but I especially love big dogs, since they’re generally such gentle giants. I wanted the name to convey her size. One of Becca’s best neighborhood friends is a huge French Mastiff with a delicate name: Scarlett. I just love the irony!

Moose's connection to his girl, Zara, is understandable and completely endearing.  Is this bond between the two based on a personal real life experience or the experiences of someone you know?

Absolutely! It’s based on Anya and Becca. Anya’s an only child, and Becca is like her dog sister and playmate. As I mentioned above, we got Becca when Anya was 4, and Becca was approximately six months old. Now Anya’s 15 ½ and Becca’s 11 ½. This is my mouse pad and favorite photo of them. I’ve dubbed it “best friends.” My Penny & Jelly books are based on their bond too. 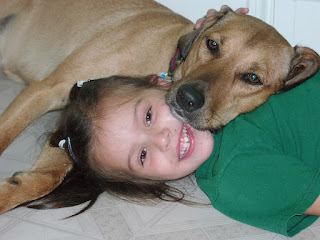 (If you want to read about the Penny & Jelly books I talk about them here.)