In His Own Mind

Heroes walk among us every single day.  They come in all shapes, sizes and ages.  Some might not even be human.  Always ready for action they can transform from ordinary to extraordinary in a single second.  We may not even be aware of the shift in their identity.  It is hidden from us; only a vision in the mind of the courageous champion. 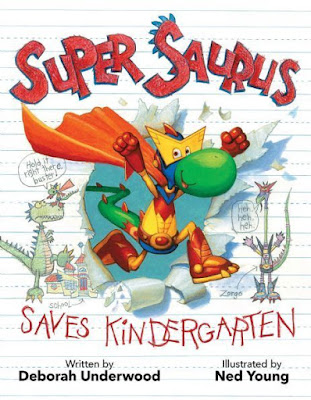 As adults we sometimes forget how brave children are to leave their homes, venturing out to learn in school classrooms.  For the little guys and gals attending school for the first time as kindergartners it can be daunting.  Super Saurus Saves Kindergarten (Disney Hyperion, June 27, 2017) written by Deborah Underwood with illustrations by Ned Young follows Arnold as he challenges a perceived formidable foe.

Kindergarten was starting in two days,
and Arnold was busy making plans...

Arnold's plans did not include what students would normally take in their backpacks or what they would wear.  His plans were how to escape.  He would do anything not to attend the first day of school.

Arnold was convinced his teacher was

He was sure all the children would be snacks for Krok the pet T. rex of Zorgo.  As Arnold's conversation continued with Emily, he became super-charged with conviction.  He would not go or stay in his classroom because he was

Over the course of the next two days, Arnold gathered his gear, gizmos and gadgets.  He was packed and ready for whatever happened beginning with a ride to school as a captive in a submarine.  (Mom and Dad drove him in the family car.)  He ran as soon as the vehicle stopped but did not get very far.  Plan B was to use his Sticky Shoes to scale the building.  Again his flight was thwarted.  He had no choice but to face Zorgo.

Every activity designed, music, art, free and circle time, by Mr. Z was perceived as a confrontation with Zorgo.  Super Saurus was in full-blown hero mode.  At snack time the greatest challenge yet arrived uninvited.  Super Saurus put his super smarts into action.  Kindergartens never fear, when Super Saurus is here.


A fabulous blend of voice by the narrator, realistic conversations and Arnold's thoughts by Deborah Underwood has readers cheering for Arnold and Super Saurus.  His character traits of planning, determination and doing the right thing for others compel us to keep turning the pages. You have to admire the patience and good nature of Arnold's parents and his teacher.  Here is a sample passage.

His ship screeched to a halt.  He couldn't leave
all those innocent children in Zorgo's clutches!
There was only one thing to do.

Super Saurus narrowed his eyes. He
straightened his mask.  He marched up
to Zorgo.  "I challenge you to a duel!"


You can almost hear the blast of superhero music swelling in the background as you look at the matching dust jacket and book case.  Super Saurus charging through the lined school paper, arms raised and smiling, is ready for action.  We know for what he is prepared by his own drawings shown on the left and right of his body.  The bright bold colors seen here are used throughout the book.

To the left, on the back, Arnold aka Super Saurus has drawn a particularly hilarious scene between him and Zorgo.  The three speech balloons reveal the strength of his confidence in his abilities and his desire to avoid school.  On the opening and closing endpapers, on a white background, more childlike drawings reveal the abilities of Super Saurus.  We can see his Rescue Rocket, his Super Sticky Shoes and his Super Saurus Scuba Suit all in use.

On the title page the text is placed on paper on an easel.  Arnold is facing it, crayon raised and ready to make some art.  On the dedication page Super Saurus is chatting with his fellow classmates.  Rendered in acrylics on illustration board (and acrylics and colored pencils on watercolor board for Arnold's drawings) all the pictures are highly animated and cheerful.  Ned Young uses his space superbly to highlight the story.

His images span two pages, single pages or are grouped on a single page.  When the story focuses on Super Saurus the text is placed in a yellow box rimmed in red with black text.  Readers are going to love the Super Saurus and Zorgo clothing, special effects and alternate world.  There will be page turns with significant pauses.

One of my favorite pictures of many is on a single page.  Arnold dressed in his Super Saurus garb, a mask and cape, is packing his backpack.  He has it placed on the living room sofa as he stands on an arm.  A rope around the outside holds his Super Sticky Shoes, boots dripping in maple syrup and peanut butter.  He stuffs his Rescue Rocket constructed from cardboard boxes into the opening at the top of his backpack.  His flippers and a fishing pole, for deep sea rescues, are part of his first-day-of-school gear too.  The vivid hues and details (wrinkles in his denim shorts, texture in the colored rocket) contribute to the overall charm of this (and all the) illustration (s).

You will want to add Super Saurus Saves Kindergarten written by Deborah Underwood with illustrations by Ned Young to your books-about-school collections.  Readers will feel a connection to Arnold and applaud his endeavors.  There is nothing like imagination and creativity to save the day.

To learn more about Deborah Underwood and Ned Young and their other work please view their websites by following the links attached to their names.
Posted by Xena's Mom at 7:44 PM