When an event occurs with no initial logical explanation it can be considered a mystery.  Likewise any story in which this type of event drives the main plot is named a mystery.  As you read collecting the clues, it's like going on a scavenger hunt.  Following along with the characters is almost as exciting as being there with them. 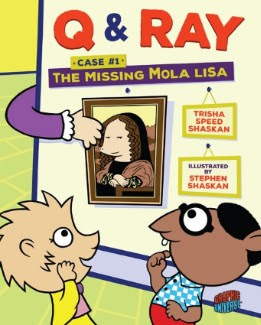 After an exchanged greeting between Mr. Shrew and Ray, we discover the new student from France is really Q attempting to fool Ray with a disguise.  It's her goal to become a master.  Ray wants to be a master of something else besides cheese-and-onion sandwiches.  Magic is his aim.

Their second grade classmates are going on a field trip today to see the famed Mola Lisa at the Elm Tree Art Museum but first the students are entertained by The Great Don Realo, a surprise visit by the magician.  In the afternoon as the children of Elm Tree Elementary stand before the Mola Lisa suddenly the lights go out, fire is sighted but before they can exit the lights are back on and the fire has disappeared.  The fire is not the only thing missing. The Mola Lisa is gone.

Sharp-eyed and on the job, Q and Ray quickly discover two clues.  Visits to three locations increase their knowledge of the culprit responsible for the crime but they lack real evidence.  Like the great detectives before them, they reexamine all the gathered clues, leading them to the truth. Q and Ray, masters of magic and disguise, deliver the final surprise.


Nearly the entire narrative is told through conversations between the characters.  Trisha Speed Shaskan weaves interesting facts about magic into the story which careful readers will eventually see are key to locating information about the theft.  She also cleverly uses Q's passion for disguise as part of the plot details.

The dialogue between the characters will be easily understood by the intended audience.  When Q and Ray are trying to solve the case, it's as if we are joining in the chat.  Humor appears when you least expect it.

Here is another passage during lunch between Ray and Q.

How about a magic trick?
Sure!
Look at the quarter.
It's been in my family for years.
We've passed it from one rat to the next.
Ha! It's gone!

Don't worry.  I won't let history
slip through my paws.  It's
right here! Or---right ear!
Aces! How did
you do that?


When you first look at the front of the book case, it's hard not to think of Saturday morning cartoons.  The characters are cute and comical at the same time.  Illustrator Stephen Shaskan has tied all the elements in the image together to look like a display at a gallery.  And he includes a huge clue or is it a red herring?  To the left, on the back, is text relative to the title you might find on a jacket flap.  The opening and closing endpapers are a crisp, pristine white.  A design technique similar to the case is used for the title page with text and images like pictures hanging on a wall.

In this graphic novel the panels are varied in size with the frames having rounded corners.  Smaller panels are placed within larger panels.  Sometimes we will be given a different perspective to draw our focus to a specific point as when Ray is doing his magic trick. Stephen's signature geometric rays radiant from his characters in some of the scenes.

The placement of the speech balloons will assist early readers.  For emphasis and dramatic effect text is enlarged, made bold and placed in jagged speech balloons.  Readers can easily discern the elevated volume of the speaker's voice.  I think readers with any art knowledge will find the depiction of The Scream, Girl with a Pearl Earring and the Mola Lisa hilarious.  A nod is given to two specific artists in the clothing worn by Ms. Easel.

One of my favorite of many illustrations is when Q and Ray are talking over a twist in the case.  They are standing facing each other.  Q is wearing a yellow jacket and skirt with purple accessories and shoes.  Ray is wearing another combination of his usual checked shirt (light blue and white) with red pants and shoes with light blue socks.  Their expressions are animated, endearing and funny.

During an impromptu and very short questions and answer on social media several nights ago, Trisha had this to say about this first title in the proposed series.

Like our picture book Punk Skunks, Stephen and I created Q & Ray together from its conception.  While brainstorming which type of story we wanted to create, we decided on a mystery for a few reasons.  For years, I taught mystery-writing classes to elementary students; it was my most popular class.  From teaching it, I always wanted to write a mystery.  Like the students, Stephen and I loved mysteries as kids.  At first, Q & Ray was a chapter book, but two things happened.  One: Stephen and I read tons of graphic novels for kids to prep for a class we taught kids on the subject.  In the meantime, I worked as a literacy coach with elementary school students.  Some of the emerging readers wanted to read the Babymouse and Lunch Lady graphic novel series, but they didn't have the reading skills to read them, yet.  I though the format could provide a readable text, but also visual cues for young readers.  Stephen and I chose the names Q & Ray as a riff on Q & A, questions and answers, which are the basis of mysteries.  While writing the story, I drew upon my love of Sherlock Holmes.  While illustrating the story, Stephen drew upon his love of the aesthetics of Harvey Comics (Little Dot, Richie rich, Casper the Friendly Ghost),---for the use of thick black lines and flat colors.  Together, Stephen and I drew upon the power of friendship; how a team versus an individual can be best suited to tackle the odds of solving mysteries---and of course, creating books!


For readers eager to read graphic novels and solve mysteries while enjoying the companionship of two likeable characters hand them The Missing Mola Lisa (Case #1 Q & Ray series) written by Trisha Speed Shaskan with illustrations by Stephen Shaskan.  I think it might be fun to act out some of the chapters or scenes from the chapters like a reader's theater.  I know there will be a copy of this on my personal bookshelves and ready to hand out at Halloween.  You will want one on your professional shelves too.  On the final page under Fun Facts readers can learn about Leonardo da Vinci upon which Leonardo da Squity is based in this book.

To learn more about Trisha Speed Shaskan and Stephen Shaskan and their other work please visit their respective websites by following the links attached to their names.  To view interior portions of this title please stop by the publisher's website.  Both Trisha and Stephen wrote posts for Picture Book Month.  Trisha was featured at KidLit 411.