Heroes come in all shapes and sizes, human and non-human.  They can be ordinary individuals placed in extraordinary circumstances, the victors in an unexpected challenge.  Some heroes have remarkable skills or characteristics unknown to others until a situation demands their use.  Heroes can be a part of everyday life or come from the pages of fiction. 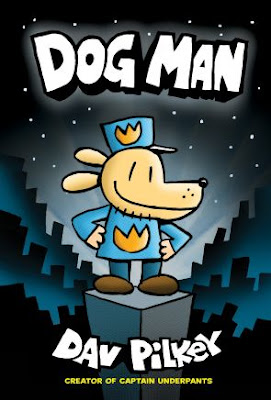 For a moment let's agree on two things.  Dogs' lives are simply too short.  Not all humans use their brain power to its fullest capacity.  In the wonderful, wacky realm of "What-If" from the marvelous mind of a beloved author and illustrator a new hero is born.  Dog Man (Graphix, an imprint of Scholastic, August 30, 2016) written and illustrated by Dav Pilkey is a hilarious collection of four adventures penned by those creative comedians George Beard and Harold Hutchins.

... It's a box full of old Dog Man comics we made when we were kids.
Hey, I forgot about these!!!
They read for hours
Ha Ha Ha Ha
I crack me up.
Look how you used to draw!
Old school!
And look how bad you used to spell!!!
Well, what should we do now?
Let's make a new comic book.  ...

The first chapter begins with a bang and the origin of Dog Man.  Officer Knight and Greg the dog are caught paw-handed sleeping on the Chief's brand new couch.  Banished for the moment, their presence outside the police station is noted by villain Petey, a striped-cat, who leaves a bomb for them to disarm.  When the smoke settles, the only thing left for medical personnel to do is to stitch brilliant Greg the dog's head on the physically strong body of not-so-smart Officer Knight.  The Chief is not fond of the doggy kisses he now gets and Petey acts quickly to build a gizmo guaranteed to get rid of this Dog Man.

Seen racing from his Secret Lab riding his invention Petey's words give Dog Man an idea.  Sometimes what you swallow can be your downfall.  Sometimes you can't claw your way out of trouble.  Rats!  It's off to cat jail for Petey.  Readers beware.  No jail can contain Petey for long.

An evil mayor, an equally evil Dr. Scum and a robot on the rampage clash with Petey and his can of Invisibility.  With cleverness, instinct and knowing how to use a cell phone Dog Man wins the day once more.  Back in cat jail with too much time on his paws, Petey begins a campaign to uncover the truth of Dog Man's intelligence.

His discoveries lead him to use his latest creation the

The results are not exactly what Petey wanted.  In fact a real stink leads to his downfall.

For some reason, Petey continues to be allowed uninspected mail while in jail.  His latest package eventually leads to his undoing but not before rampaging hot dogs, little fires, a giant gyro (or is it a Philly cheese steak?), and a bunch of bones play parts in an outrageously funny episode.  In a crashing conclusion everyone gets exactly what they deserve as the Chief surprises even Dog Man.


Dav Pilkey's signature wit and wisdom shine on the pages of his latest graphic novel.  He thinks like George and Harold and a dog with one ridiculous phrase, conversation and piece of action after another.  Word play abounds with conversational exchanges like this one between injured Officer Knight and Greg the dog.

How do you feel, old friend?
Ruff!
Me too!

His use of exclamation points, capital letters in bold and words full of meaning make reading about Dog Man like Saturday morning cartoons.

As readers turn the pages they become a part of the adventure.  They can assist the hero but enjoy the crafty, non-stop inventive thinking of the adversary.  They might also wonder more than once how Dav Pilkey thinks of these things.


Resisting the front image on the book case (I am working with an ARC for which I am grateful super librarian Becky Caldaza provided to me.) is futile.  Dog Man standing on a box in the center of city buildings at night beneath a starry sky, the slight smile playing on his mouth, has the look of a hero's hero.  Of course without reading the first chapter readers might be wondering about the stitching from the head to the body.

Each page full of panels is perfectly paced.  Even when we move from one part of town to another, it is flawless.  On a single page we go from the chief's office where Officer Knight and Greg the dog are getting a verbal reprimand to the two of them wishing they could find favor with the chief and then to Petey and his sidekick spying on them through binoculars.  The expressions on all the characters' faces contribute to the comedy.  The range of emotion on Dog Man is particularly splendid.

One of my favorite set of illustrations is when Chief first talks with Dog Man.  He very clearly, in his usual loud voice, warns Dog Man who patiently listens to the tirade.  When Chief finally says

Well?  What do you have to say for yourself?

Dog Man looks at the chief and does what a dog would do.  He gives him a doggy kiss and grins.  Guess what the chief does?


Dog Man written and illustrated by Dav Pilkey (with color by Jose Garibaldi) is woof-tastic as a whole or chapter by chapter.  The combination of text and images will have this book off and never on the shelves.  You must have multiple copies.  At the beginning of the book Dav Pilkey has written an inspirational letter to the Reader.  The Flip-O-Rama pages are fantastic as are the How2Draw pages for Dog Man, Petey, and Philly at the back.  Readers will be barking when they see what Pilkey includes on the final pages.

To discover more about Dav Pilkey and his other work please follow the link to his website attached to his name.  Please stop by the Scholastic On Our Minds blog for the cover reveal and a link to an excerpt at BuzzFeedBooks.  You'll want to see this.  At Scholastic's Ambassador for School Libraries John Schumacher's blog, Watch. Connect. Read., Dav Pilkey leaves a message for readers.  Dav Pilkey is interviewed about Dog Man at School Library Journal and Publishers Weekly.  These links, here and here, at Scholastic are great for further study of Dav Pilkey.  You'll certainly want to use the Dog Man Teaching Guide.

DOGMAN is on bookshelves now, & you need to go to Dav Pilkey's Instagram right not to see what he did. https://t.co/mtLOPNZuoF #pilkeypower
— Jarrett J. Krosoczka (@StudioJJK) August 30, 2016