Prior to being chosen by my canine companion, I was sleeping when the rest of the world was sleeping.  In the past fourteen years, and counting, I have become another wanderer in the host of nighttime shadows.  Sometimes I push back the dark with outside house lights, a flashlight or a head lamp.  On other walks I let the moon and my furry friend guide me.  We are ever vigilant, leery of close encounters. 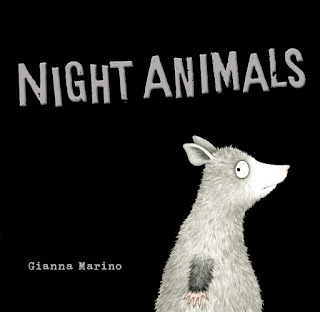 If the silence is broken by the snap of a twig or an unfamiliar sound, we halt, heartbeats quickening.  We stand as still as stone hoping to go undetected as another passes.  Night Animals (Viking, an imprint of Penguin Group (USA), July 14, 2015) written and illustrated by Gianna Marino follows a group of beings on a frightful night.

Hey Possum,
what are
you doing
in there?

Possum is trying to avoid contact with what he believes are scary things in the forest.  He whispers and motions for Skunk to be quiet.  The two are now inside a hollow stump hiding.  Skunk wonders why they are there.

Playing dead because that's what he does best, Possum hears Wolf describe a truly terrifying creature.  It's Bear but he runs toward them in total panic.  What could this possibly be?  Racing for their lives as the sky darkens, they are frozen in place by a command.

It's a bat who asks a question, gets a reply and who in turn makes a very evident observation.  As the four forest critters utter an exclamation another inquiry, by an as yet unseen being, is made.  A small single sound reveals all.  The stunned silence explodes into pandemonium.  And Possum?  What do you think?


Told entirely in dialogue, sound effects and one thought by Possum, Gianna Marino hooks readers with the first question and answer.  The simple direct conversations, sometimes a series of single words, heighten the fear of the animals and the comedy for readers.  Through her word choices you can feel a tension building toward the surprising outcome (and a not so surprising) final act.  Here is a sample conversation.

HELP ME!
Aaaarrrroooooo
Help
YOU!?
You're a
wolf!


On the matching dust jacket and book case the look on Possum's face, those wild, wide eyes full of dread, is aimed toward the back, to the left.  Charcoal gray trees stand straight against the dark of night.  A howl rings loud and clear.  In a speech bubble someone says

Did you hear something?

On the inside of the dust jacket Gianna Marino explains the difference between nocturnal and crepuscular animals.  The six characters are featured in animated poses holding boxes which display four items of information about each of them; size, weight, a Did you know question and another fact.  The story begins and ends on the endpapers.  They are pitch black with only sets of eyes, white with black, on each of them plus a difference at the conclusion (which I will not disclose).

On the title page our tale continues in a double page illustration with Skunk meandering through the woods toward Possum peeking out from behind a hollow tree.  The remaining pictures rendered in gouache and ink on Fabriano Artistico paper all span two pages.  With the black canvas for them all, the colors of the animals pop off the page.  Except for the sound effects, the text is shown in white speech bubbles with black print.  To deepen the mood, Marino pulls readers further into the story by zooming in on several scenes.  The eyes of the characters elevate the hilarity.

One of several favorite illustrations is when Bear is making an appearance.  Wolf is describing him.  His arms are wrapped around Skunk in a tight embrace.  Possum is lying on the ground playing dead.  His thought is


Guaranteed to generate laughter even after repeated readings, Night Animals written and illustrated by Gianna Marino will have you looking and listening every time you step outside after dark.  It's a healthy look at fear and being fearful.  It reacquaints readers with those animals that prefer to wander beneath the stars and the moon in its various phases.  Expect requests to read it over and over.

To discover more about Gianna Marino, her other books and artwork please follow the link attached to her name to access her website.  Gianna Marino was interviewed about this title at The Hiding Spot hosted by Sara who works at an independent book shop in Traverse City, Michigan.

I wrote about two other books written and illustrated by Gianna Marino, Meet Me At The Moon and  Too Tall Houses.
Posted by Xena's Mom at 12:11 AM