Hardly a day goes by without seeing a group of small birds chasing, diving and madly chirping at a crow.  While they may be a pest in the avian world with less than desirable eating habits, they are known for their intelligent adaptability.  After my parents retired (or probably before but I did not notice) they were daily entertained by a group of crows who congregated in their backyard.  They placed a large basin of water on a backless bench so their feathered friends could drink and jump in to cool themselves.  It was like watching a comedy routine.  I wouldn't be a bit surprised to discover they named some of the repeat performers. 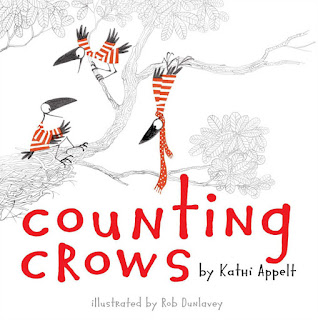 Counting Crows (Atheneum Books for Young Readers, March 3, 2015) written by Kathi Appelt with illustrations by Rob Dunlavey is a concept book with a surprise as cunning as the cawing characters.  Due to their residency in nearly every corner of the world, readers will feel connected to and will easily identify with the featured flock.  There's merriment in the wind.

One,
two,
three
crows in a tree.

As you can plainly see by the dust jacket these are no common crows; these birds fly with finesse and a sense of style.  One of them even has a stylish polka-dot scarf.  From the tree the trio spots insects and mangoes three.  They each enjoy the delectable discovery.

There's a nest in the branches made

of straws and sticks

a perfect resting place for more plumed pals now up to six.  These creative connoisseurs locate peanuts and plums; precisely plentiful for the eager sextet.  Flying from their tree to the lines stretched between poles, their number grows to a nifty nine.  Still needing another snack they scavenge creeping crawlies and crispy crackers.

As the three groups of three, in a tree, on a nest and sitting on a line, digest these delicacies, the chatter begins.  Another voice joins the chorus.  Now there are three, six, nine and ten.  These lucky birds find ten more treats times two.

Guard your gardens, these avian adventurers are on the prowl.  Goodies are gathered for eleven.  Away they travel together to a previously peaceful park.  How many are there?  Twelve crooners in a row collect leisurely escargot and crunchy chips.  Someone else is quietly counting.  A watcher warns the counted crows.  Beating wings herald a new fashion statement.


Most times when hearing one, two in quick succession, your mind will leap to buckle my shoe.  Decades later the age old rhyme learned as a child is firmly planted in your memory.  For a new audience Kathi Appelt puts her own masterful spin on counting by grouping the numbers by three, having the crows feast on their found food and turning it into a story.

She places the trios in easily remembered places but playfully continues by mentioning roly-poly bugs, mangoes, peanuts and peas.  Each food is introduced with a descriptive adjective; salty peanuts, spicy ants and crunchy crickets.  After the second meal is mentioned she concludes the rhyme with a fun exclamation.  Here is a sample passage.

...nine round crackers.
Nine for the counting crows.
Nine, by smackers!


The limited color palette of black, white, gray and red on the matching dust jacket and book case demands you stop and look at this book.  Well, that and the collection of six humorous striped sweater-garbed crows sitting, hanging, talking, peering and peeking from the branches of a tree extending across the opened jacket and case will definitely do the trick.  To the left, on the back, the rhyme for six of the group is an open invitation.  A more rusty shade of the red covers both the opening and closing endpapers.  The threesome from the front are busy on the title page while two others sit on the verso and two more fly from the dedications on their special page.

Rendered in pencil and digital color the illustrations of Rob Dunlavey capture the essence of crow.  Their long black bills, large eyes (How can a dot show so much emotion?) and spindly legs are hilarious.  During the rhyme readers are treated to a double-page image.  As they seek a particular cuisine, the pictures are smaller, grouped together over two pages, showing the crows engaged in a variety of activities; counting on their feathers, head inside a bag, stacking crackers or opening a garden gate.

When we give attention to these drawings the little details offer us laughter and hints. The unfortunate ants are seeking the crackers too, even assisting in the stacking.  I wonder how much longer the crow will read the newspaper on the park bench.  One observant crow's eye directs careful readers to a shift in the story.

One of my several favorite illustrations is when ten crows find the crickets and peppers.  On the left five of them are eyeing the doomed crickets.  One cricket is perched on the bent form of a crow.  A sixth crow lounging on its back, beak open, has thrown a cricket into the air, soon to be a snack.  To the right two crows are trying to carry peppers which have tumbled from a basket.  Crickets are crawling on some of them.  Another crow is balancing a pepper on its beak.  The final crow looks curiously at a cricket on its hand.  Friend or food?


Read Counting Crows written by Kathi Appelt with illustrations by Rob Dunlavey aloud or sing it as a song.  Whatever you do, do it often.  The language used by Appelt welcomes participation and the artwork of Dunlavey generates giggles and grins.  Your listeners (and readers) will be unable to sit still once the rhythmic rhymes begin.

Please take a moment to visit the websites of Kathi Appelt and Rob Dunlavey by following the links attached to their names.  This title was featured at Jama's Alphabet Soup with a review and a recipe.  Here's a link to several pages of activities. Enjoy the book trailer.