Standing Up For The Good

Depending on your personality, the situation or both, being invisible can be a useful survival technique.  Blending in with a crowd, keeping silent whenever possible, and not drawing attention to yourself serve a purpose.  There are those who follow this lone wolf path; either by choice or because they are not welcome as a part of the pack...yet. 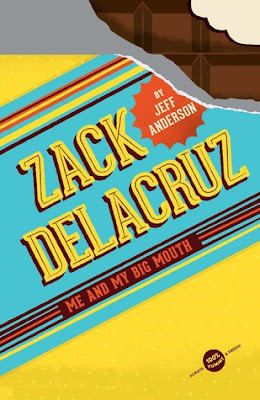 Maneuvering through the uncertain realities of middle school is tricky.  Everything thought to be true is changing.  As a sixth grade student you're constantly scrambling to keep both feet on the ground.  Zack Delacruz:  Me And My Big Mouth (Sterling Children's Books, August 4, 2015) debut novel by author Jeff Anderson addresses, with liberal amounts of humor, the lone wolf, the observer, who creates a pack, a group with a common cause.

A typhoon spray of spit.
A stupid assembly.
And my big mouth.
That's all it took to ruin my life.
If you're a sixth grader at Davy Crockett Middle School in San Antonio, Texas, you start off every day in advisory.  Besides cruel and unusual punishment, advisory is an avoiding game:  avoiding eye contact, avoiding talking, and, so far, avoiding trouble.

Thought to be a relief from the dreaded advisory, the school population heads en masse to the gym for an assembly on bullying.  Needless to say, the presenter, while making some valid points, probably has even the faculty rolling their eyes with her over-the-top perky style.  Later a group of students gather in the library for class.  Our narrator, Zack Delacruz, introduces us to several of his classmates through an incident involving Janie Bustamante, prone to spitting when speaking.  For reasons unknown even to him, Zack speaks out on behalf of Janie who is being harassed by Jose, El Pollo Loco, and class clown.

Mrs. Darling, their quirky librarian, misses this confrontation while taking a phone call.  The results of the call and an impromptu dance competition place adversaries Zack and Jose in charge of a sixth-grade candy-selling campaign.  This is no ordinary fund raiser.  Forty-eight hundred dollars' worth of bars need to be sold in five days in order for the sixth grade students to be able to attend, for the first time ever, the seventh and eighth grade fall dance.

Thankfully Zack has a good friend in Marquis, a bit of a math and organizational wizard.  They met and ride the same bus home on alternating weeks, when Zack stays with his Dad.  Let's pause here for a minute.  Zack is beginning his first year of middle school, his parents have recently divorced, all plans of staying invisible are out the window and he is basically in charge of making sure the sixth grade students get to go to the dance because Jose is no help at all.  This guy's life is loaded with daily unexpected developments.

Worried about five extra boxes after every student has taken their share, Zack is ecstatic when the next day Janie wants all of them.  In his current life of constant challenges, a miracle is in the making.  As the fates would have it, this euphoric moment vanishes like a puff of smoke.  A candy crisis of epic proportions rolls in like a sudden summer storm.

Marquis' sprained ankle, a pamphlet in Nurse Patty's office, a phone call, an online search, an intervention and Instant Lube might provide a solution.  Zack, Marquis, Jose, Janie, Sophie and her groupies, Sophie's eighth grade boyfriend, Raymond, and his crew, Cliche Jones and Chewy Johnson need to do the improbable, work together.  As the page turns speed up, so do the events culminating in an unforgettable Night At The Alamo. NO LOITERING!


Jeff Anderson's experiences, over twenty years in the classroom, are evident on every page.  These fictional characters are a window and a mirror.  They give readers unaware of middle school a direct link to the swirl of everyday life in and out of the classroom.  Readers will see themselves within these pages.

Zack's voice, his perspective, is spontaneous and hilarious.  The narrative unfolds from conversations held with his classmates and his thoughts.  The portraits he paints of Mrs. Darling, the librarian, Mrs. Harrington, their English teacher, Coach Ostraticki, and Principal Atkins are classic.  Zack's Dad will have you cheering.  You will be laughing and nodding your head in agreement at the realism described in this book.  Here are some sample passages.

I stumbled through the rusted metal door frames of the gym.  Echoing laughter and shouts bounced off the hardwood floors.  A sea of black, red, and khaki uniforms collected at the door as everyone looked for their friends.

Marquis never accused me of lying that day or the next, even though I supposed he knew.  He'd given me a pass, and my lie floated away like a loose plastic bag on the side of Highway 281.  And it was replaced by friendship.

It was like Raymond Montellongo had just punched me in the stomach.  But this was Dad.  First Mom made Dad move out.  Then, I had to live with Dad every other week in a place that isn't even fit for living.  He had promised we'd get a TV.
"I want to make some changes, Zack," Dad said.
He wouldn't stop.  He just kept going.  Dads are supposed to give kids everything they need, like TVs and snacks.  And for crying out loud, dad's feet aren't supposed to stink so much.  I stood up, clamping my nose.
"Why don't you change your socks?" I said.
"Very funny, Zack."  He reached over and patted the back of my leg.  "I think we watch TV too much."
"Not lately.  Not since we moved to the Villa De La Prison."
"Hey now, Zack."  He moved in for a side hug.
"Dad, I want to make some changes too," I squirmed out from his arm and stomped toward the door.  My voice shook.  "The first is no more changes."  And I slammed the door like an exclamation mark, telling Dad I was serious.  Seriously mad.


Jeff Anderson has penned a title, Zack Delacruz:  Me And My Big Mouth, which will resonate with the intended audience.  It addresses pertinent issues faced by middle school students with truth and laughter.  I think copies of this book will have the well-loved look in no time at all.  I am not sure if the letter from the editor and author will appear in the final copy (my recommendation is based upon an ARC) but they add insight into the story.