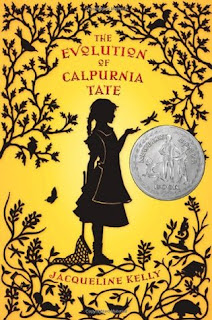 On May 12, 2009 Jacqueline Kelly published her debut middle grade novel, The Evolution of Calpurnia Tate (Henry Holt and Company). It went on to garner a Newbery Honor Medal in 2010.  Readers were taken back to the community of Fentress, Texas in the year 1899.  They cheered for Calpurnia Tate the only daughter in a family of seven children (She was born in the middle of three older and three younger brothers.) who against all odds accomplished great and small things with the help of her witty, wise and I-don't-care-what-people-think-about-me grandfather.

In preparation for the sequel to be released I reread The Evolution of Calpurnia Tate this past week.  It was even better the second time. I couldn't resist placing sticky notes to mark some gems like these:

By 1899, we had learned to tame the darkness but not the Texas heat.  We arose in the dark, hours before sunrise, when there was barely a smudge of indigo along the eastern sky and the rest of the horizon was still pure pitch.  We lit our kerosene lamps and carried them before us like our own tiny wavering suns.

When I reached the river, I stripped down to my chemise, floating on my back with my shimmy gently billowing around me in the mild current, luxuriating in the coolness of the water flowing around me.  I was a river cloud, turning gently in the eddies.  I looked up at the filmy bags of webworms high above me in the lush canopy of oaks bending over the river.  The webworms seemed to mirror me, floating in their own balloons of gauze in the pale turquoise sky.

"It means that we should celebrate today's failure because it is a clear sign that our voyage of discovery is not yet over.  The day the experiment succeeds is the day the experiment ends.  And I inevitably find the sadness of ending outweighs the celebration of success."
"Should I write it in the log?" I said.  "Cat piss, I mean."
He chortled.  "A good idea.  We must be honest in our observations.  Take up the pen and kindly do the honors, my girl."

With her adept use of words Jacqueline Kelly takes us where she wants us to go introducing us to the most intriguing and remarkable people. 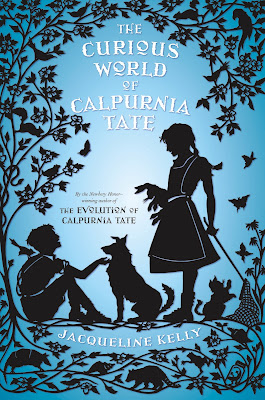 Today, July 7, 2015, is the release date for the second book, The Curious World of Calpurnia Tate (Henry Holt And Company).  It is pure bliss to step through the open door with a page turn back in time to Fentress, Texas.  It's the spring of 1900 and change is in the air.

To my great astonishment, I saw my first snowfall on New Year's Day of 1900.  Now, you might not think much of this, but it is an exceedingly rare event in central Texas.  Why, only the night before, I'd made the resolution to set eyes on snow just once before I died, doubting it would ever happen.  My improbable wish had been grated within the space of hours, the snow transforming our ordinary town into a landscape of pristine beauty.  I had run through the hushed woods at dawn clad only in my robe and slippers, marveling at the delicate mantle of snow, the pewter sky, and the trees laced with silver, before the cold drove me back to our house.

With those introductory sentences the voice of Calpurnia is sounding with clarity in our minds once more.  Her oldest brother Harry who in the past was frequently an ally is focusing all his spare moments on courting a local young woman.  Thankfully he still has moments to help Callie when she seeks his advice.  If you will recall he gave her the notebook, a constant companion, in which she records observations, questions and answers about the natural world.

Life on the family cotton farm and at the gin ebbs and flows with the seasons.  Viola, head of the kitchen, working for the family before even Harry was born, is as spirited and wise as ever.  Three of her brothers are still sweet on her best friend, Lula, but she appears to take a shine to the youngest of them, Travis.  Within the first several chapters it's clear Callie Vee and tender-hearted Travis are going to be in and out of trouble for most of the story.  As far as Travis is concerned any animal, especially those appearing lost or alone, are fair game to becoming cherished pets.  It begins with an armadillo.

As fate or intellect would have it, the merest suggestion from Granddaddy about a possible disease ends the armadillo episode lickedy-split. Rescued blue jays, a baby raccoon, and finally a coyote-dog mix keep Callie and Travis busy as bees with their care and keeping their presence a secret from their mother.  Mother Nature enters the mix, as she is apt to do, and a home-made barometer and a laughing gull foretell deadly developments.

The hurricane in Galveston in 1900 is the deadliest in United States history.  As a result of the storm and after two months of helping victims, Callie's dad and brother Harry return home with a haunted appearance and two new people; one an older cousin Aggie and the other, Dr. Pritzker, a practicing veterinarian.  These two figure prominently in Callie inching toward her goal of being her own person as does Granddaddy who continues to share his knowledge and books with her whenever she can escape her required duties.   Domestic arts debutante or scientist?  Let us hope Calpurnia stays the course.


As in the first title the writing of Jacqueline Kelly makes our real world vanish to the perimeter.  We are surrounded by Calpurnia, her insatiable curiosity and those persons who influence her life the most.  The descriptions of the time of day, the seasons, the setting of the farm and community are vivid enough to feel like moving pictures in our minds.

Kelly weaves historical fact, the mindset of the majority of people in the early 1900s and the hierarchy of the Fentress and Lockhart communities deftly together through Callie Vee's thoughts and the frequent conversations of the characters.  We become attached to them to the point of laughing out loud or having our eyes fill with tears.  One of the most important themes readers will notice is the disparity between young women and young men at this time period.  It is huge.  We will feel Calpurnia's frustration and rage and respect her courage in the face of her parent's attitudes and others close to her.  Here are several other sample passages.

"Wait," I said, "you're ... you're trying to teach Bunny to retrieve?"
"Yep.  I try and try, but he just won't do it.  I even tried him with a carrot stick, but he just ate it."
"Uh...Travis?"
"Hmmm?"
"No rabbit in the history of the world has ever fetched a stick.  So don't bother."
"Well, Bunny's awful smart."
"He may be smart for a rabbit, but that's not saying much."
"I think he just needs more practice."
"Sure, and then you can start piano lessons for the pig."
"Maybe Bunny would catch on faster if you helped us."
"Not so, Travis.  It's a hopeless dream."

I told him what I'd learned about the species from Granddaddy, but he shrugged it off.  I figured he'd have to find out for himself.  Some lessons can only be learned the hard way.

A couple of my classmates tittered and elbowed each other, one of them being Dovie Medlin, my least favorite of all, a self-important nincompoop with delusions of grandeur over the fact that her older sister was the town's Telephone Operator.

But now it was time to bid adieu to the old one and start the cheerful new red one Granddaddy had given me.  I opened it and inhaled the smell of fresh leather and paper.  Could anything top the promise and potential of a blank page?


The Curious World of Calpurnia Tate written by Jacqueline Kelly is captivating historical fiction.  Jacqueline Kelly's writing, her portrait of Callie Vee, is stunning and memorable.  When you finish a work like this and feel as though you've been a passenger on a time machine, no words can describe its true impact.  Read this book.  Recommend this title.  I know I will do so repeatedly.

To discover more about Jacqueline Kelly and her other work please follow the link attached to her name to access her website.  At the publisher's website you can read an excerpt from the book as well as a Teacher's Guide to both books. Author Chris Barton highlights this title in his June newsletter and asks Jacqueline Kelly some questions.  Take a few minutes to stop by Publishers Weekly to read an interview with Jacqueine Kelly about this book.  Due to the generosity of the publisher I am giving away two sets of both books in paperback.  Good luck.