The first noise heard is the glee-filled yells of the children.  Then the familiar scents of fried foods, the sweetness of cotton candy and the tartness of home-made lemonade drift toward you on the sultry summer air.  You will pick up the calls of the barkers tempting you to try whatever challenge or oddity their booth offers. In the distance the roar of racing cars resonates.  Depending where you wander the faint whiff of barnyard odors and the soft sounds of animal conversations might float to your nose and ears. 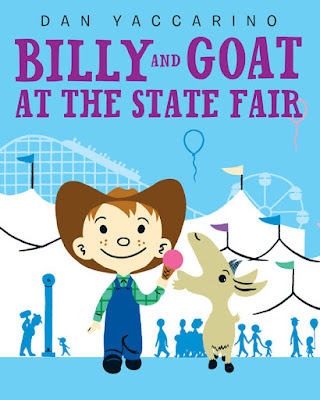 For one hundred sixty-one years the Ingham County Fair in Mason, Michigan has welcomed visitors.  Having attended numerous times as a child and later as a chaperone for children, the excitement has never faded.  County fairs and their larger counterpart, state fairs (Michigan State Fair) celebrate the end of the summer and the accomplishments of many individuals.  In Billy and Goat At The State Fair (Alfred A. Knopf, June 30, 2015) written and illustrated by Dan Yaccarino a friendship is challenged.

Billy and Goat were
the best of friends.

They were not best friends because they shared the same interests.  In fact if the phrase opposites attract were illustrated in a dictionary, portraits of Billy and Goat would be featured.

Billy liked to fix the tractor,
and Goat like to ride it.

It's safe to say, Billy's idea of fun was to read about it but Goat would rather be doing it.  In a search for excitement Goat found exactly what he wanted.  He made sure Billy knew about it too.  A huge billboard was being hung announcing the state fair.

Part of the sign announced a Best-Goat Competition.  Billy was thrilled.  Goat could hardly wait to attend.  When they arrived at the fair Billy could not believe how enormous it was.  It was intimidating.  Goat wanted the truck to stop immediately.

When the livestock tent was located Billy felt relief.  Goat decided to get free and see the sights.  It seemed like wherever Billy looked Goat was one step ahead.  Nearly in a panic Billy finally found his friend....on a gigantic float in the parade.  Truth be told, Billy was enjoying this as much as Goat was.  The rest of the day and into the night the two friends were inseparable.  Did someone say roller coaster?


Dan Yaccarino announces with his first sentence about the strength of the relationship between Billy and Goat.  He then proceeds to tell us more about their likes and dislikes defining their personality types.  Ever so slightly Yaccarino begins to set us up for the fairground chase when we realize each one is excited to attend the fair for entirely different reasons.  Billy wants calm and the competition and Goat wants wild exploration.  Here are two sample sentences.

They shared corn dogs.
(Goat thought the sticks
were delicious.)


On the matching dust jacket and book case Dan Yaccarino, in a back to front, edge to edge, illustration introduces us to Billy and Goat against the backdrop of the state fair.  We can already see how their relationship works.  Billy is looking straight at the reader, proud as punch with his ice cream cone.  He seems to have forgotten Goat will tend to do the opposite of what Billy expects.  Notice how the use of limited color in the background makes Billy and Goat stand out from the general hubbub.

An idyllic pastoral scene with the barn, farmhouse and Billy carrying a book with Goat following behind spans the entire opening and closing endpapers.  When we turn to the title page, an open- mouthed Billy is chasing that scamp Goat running away with Billy's book.  In the first part of the narrative, when Yaccarino wants us to pause we are greeted with a two-page image for emphasis.  As he makes a comparison or wants to show the passage of time, smaller illustrations will be grouped together.  During the chase he shifts to single page illustrations and two pictures to a page to create more tension.

With curved lines and dots, Yaccarino has the adept ability to convey on their faces the exact moods of Billy and Goat.  Rendered in brush and ink on vellum and Adobe Photoshop, simple elements work in combination to depict more intimate moments in contrast to larger expanses at the fair.  Yaccarino works humor into his story best during the chase.

One of my favorite illustrations spans two pages on a background of white.  Silhouettes in purple of Billy and Goat begin to wind their way on a dotted path through the fairgrounds past the merry-go-round, the Ferris wheel, floral and vegetable exhibits, a pie-eating contest, games, a maze and other rides until they find the livestock tent.  It gives an overview of the state fair but also offers sneak peeks at places figuring into the tale later.


Hand this book, Billy And Goat At The State Fair written and illustrated by Dan Yaccarino, to those looking for a way to open a conversation about events during the summer, to those wanting to see how opposite personalities can work to benefit a friendship and to those who enjoy laughing.  Readers can appreciate the use of a conjunction to separate a term but connect two characters in companionship.  How can you look at the front dust jacket and book case and not smile?

To learn more about Dan Yaccarino please follow the link attached to his name to access his website.  At the publisher's page for this title you can see interior views.  This book is reviewed by teacher librarian Travis Jonker on his blog, 100 Scope Notes.
Posted by Xena's Mom at 7:05 PM