Chronicles of Claudette--Into The Lair

Machine parts, candles, Jell-O and desserts are made using molds.  This does not work well when applied to people.  In fact the idiom, they broke the mold, implies uniqueness in characteristics.  Certainly when one follows their passion, building on their gifts, and loves doing this, they have probably stepped outside any predetermined role for them. 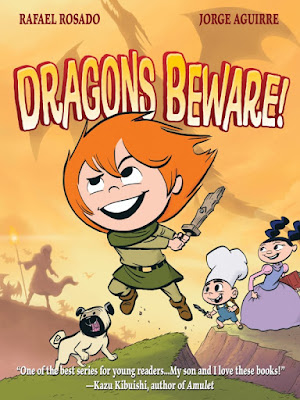 Claudette has a group of children gathered around her as she spins the tale of her father's encounter with the dreaded dragon, Azra The Atrocious.  Now confined to a wheel chair due to the loss of his legs and a hand, Augustine, Claudette's Poppa warns her of holes in her story.  In no uncertain terms he asks her to stop focusing on the past.

The fact remains; Azra holds the sword, Breaker, in her stomach to this day.  Claudette is already planning to travel to the Grim Grotto and retrieve the sword with her trusty dog, Valiant, when trouble assaults their fair town in the form of flying gargoyles controlled by the evil Grombach, supposedly confined to Calavera Island.  The Marquis, their ruler, feels overly confident in that the walls of the city are the sole defense they need.  For some reason magic is ineffective there.

When Gaston, Claudette's brother who has taken of vow of not cooking until he is a warrior, and she visit their friend Marie, a princess in training, in her tower, she echoes Gaston's opinion of Claudette's foolhardy quest. She, on the other hand, believes in diplomacy.  Another gargoyle attack propels the trio into action.  Augustine travels from the city to get his sword back believing it is the only way to defeat Grombach.

Leaving Claudette and Gaston in the care of his friend Zubair, who in turn leaves them in the care of the Marquis and his wife, Marie's parents, Augustine and Zubair travel to the Grim Grotto separate from one another.  As you would expect Claudette and Valiant sneak out from the tower in the middle of the night.  Just in the nick of time Marie and Gaston arrive to momentarily save the day.

A convergence of forces for the good and those for evil inside and outside the Grim Grotto generate maximum page-turning action.  Talents are tested.  Truths are revealed.  Fates are sealed.


When an author dedicates his work

For my papi, who was the first storyteller I ever knew

you realize he comes from a tradition of telling.  Growing up surrounded by story shows in one's writing.  Jorge Aguirre has a way of creating a tale which reaches out to the reader and makes them a part of the telling.

Even if we have not read the first book, we are quickly engaged in the events of this title from the opening page.  Told entirely in spirited, realistic dialog, the conversations disclose the dynamic personalities of each character.  We cheer, laugh, gasp, and sigh at their remarks, insights, challenges and soul-baring revelations. Here are some sample passages.

Poppa, I've been thinking...will you train me to be a warrior just like you?
Never.
But I need a hobby.
Forget it.
Oooh, we could slay Azra together and get your sword back.
No.
Think it over.
Never ever ever.
I can start whenever's good for you. (Claudette and her father)


Claudette leaping on the front cover tells you exactly the type of gutsy girl she is.  Gaston in his chief's hat, sword in hand, and Marie carrying her book of diplomacy are ready to follow their friend wherever she leads them.  Valiant is the steady canine companion.  In the background the enemy lurks.

Rafael Rosado elevates the narrative by extending the conversations with little stories of his own in the illustrations; Valiant gives chase to a lizard in the Apple Hag's tree home.  Speech bubbles, sound effect words and altered panel sizes snare our attention, to our delight.  Our eyes travel from one to another in a flawless flow.  For emphasis images may be inserted within another visual.

The facial features and body language are superbly done.  Without a doubt they add to the action and heighten the humor.  Even after two readings I continue to laugh out loud.

I have many favorite series of illustrations but two of them are: in the beginning when the children are playing dress-up and later when the soldiers from the city are found trapped in amber.  In the first Claudette is a less than enthusiastic participant.  The look on her face, a disgruntled snarl, even without the costumes is hilarious.  With each new outfit, Marie, sight unseen, offers words of praise in speech bubbles coming in from the left.  There are twelve squares on a single page.

When Gaston and Marie come to understand the power of Grombach, they are terrified and flee the scene screaming.  Claudette fails to understand their fear.  She finally tracks them down.  When she asks them if they are done screaming, the two start yelling again.  When they are finally finished, Claudette suggests they camp there for the night.  Marie says to Claudette:

The expressions on the faces of Gaston and Marie are truly funny.


You are going need multiple copies of Dragons Beware! written by Jorge Aguirre with illustrations by Rafael Rosado with color by John Novak on your personal and professional shelves.  This is one of those books which will have the much-loved look in no time at all.  It's a thrilling, heartwarming adventure with characters you can't help but love (except for the villain, of course).  It will be a true treat to read this aloud.

To discover more about Rafael Rosado and Jorge Aguirre, please visit the website for this series by following the link embedded in Jorge Aguirre's name.  If you go to the publisher's website, there are eight pages from the interior portion of the beginning. Young Readers Respond to Dragons Beware! is the title of a post found at teacher librarian extraordinaire, John Schumacher's blog, Watch. Connect. Read.  He also includes an interview made during the publication of the first title.  Be sure to read this post, The May #SharpSchu Book Club Meeting, at Watch. Connect. Read.  There are loads of resources about the first book.  The author and illustrator are interviewed at Parent Co. about Dragons Beware!  Bleeding Cool also conducts an interview with Rafael Rosado and Jorge Aguirre about the new book.  Matthew C. Winner, known as The Busy Librarian chats with Rosado and Aguirre on his Let's Get Busy Podcast #162.  Enjoy the two videos.