Look At The Size Of That Rabbit!

No matter how much we pleaded and presented our case for having a dog, my parents stood firm in their resolve.  My dad, the oldest of four brothers, was the only one to ever have any children.  Perhaps my Uncle Don took pity on my sister and I or maybe he was trying to pull a prank on my dad but one Easter, a pure black and a white rabbit with black spots appeared as if left but the famous Bunny himself.  Midnight and Sniffer were immediately welcomed into the family. 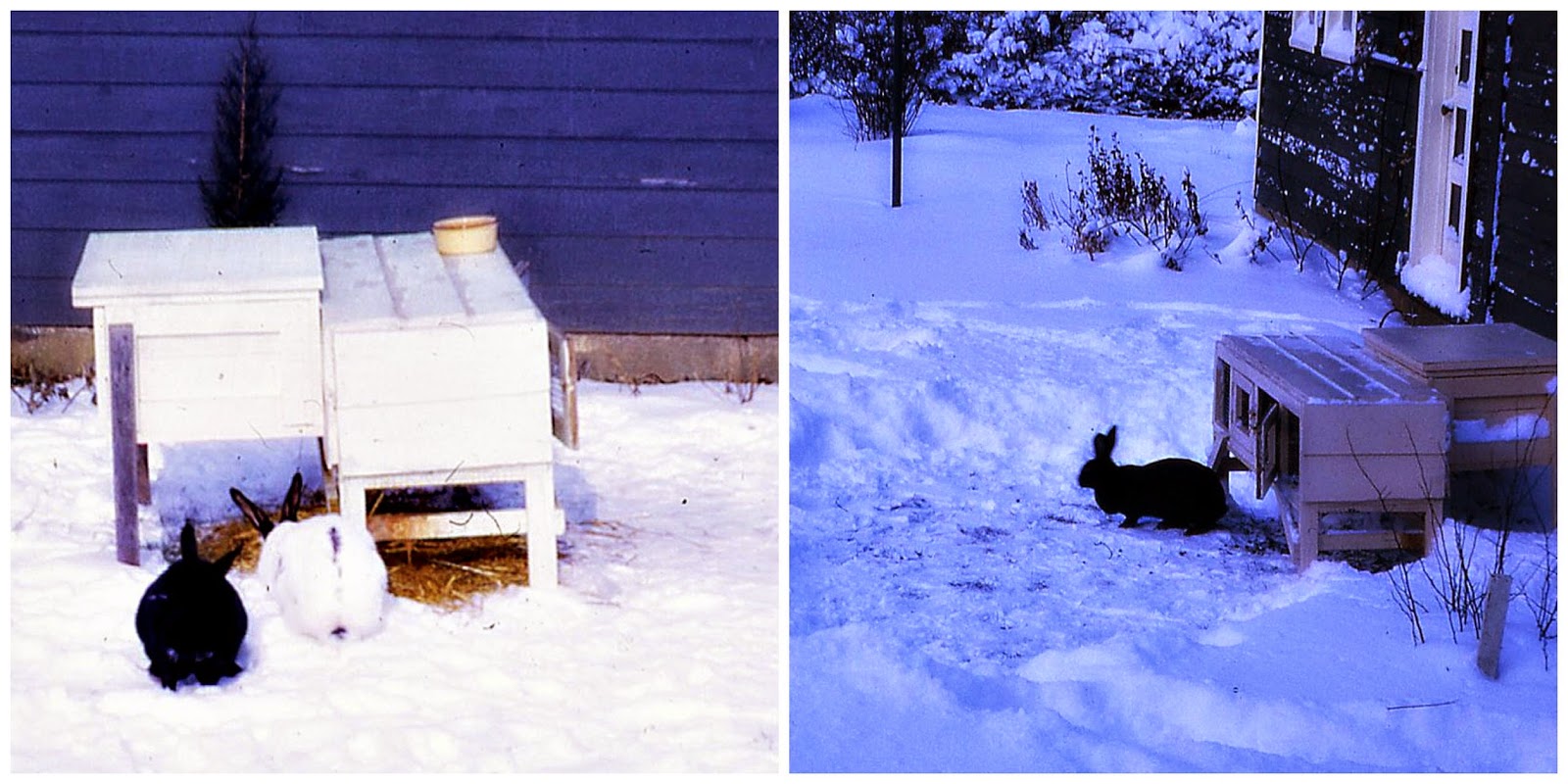 Good sport and genius designer that he was, Dad built a great house for our two new furry friends including an enclosed open air porch in the front and cozy hutches in the back.  We had harnesses and leashes for walking them.  As far as we were concerned they were our "dogs". 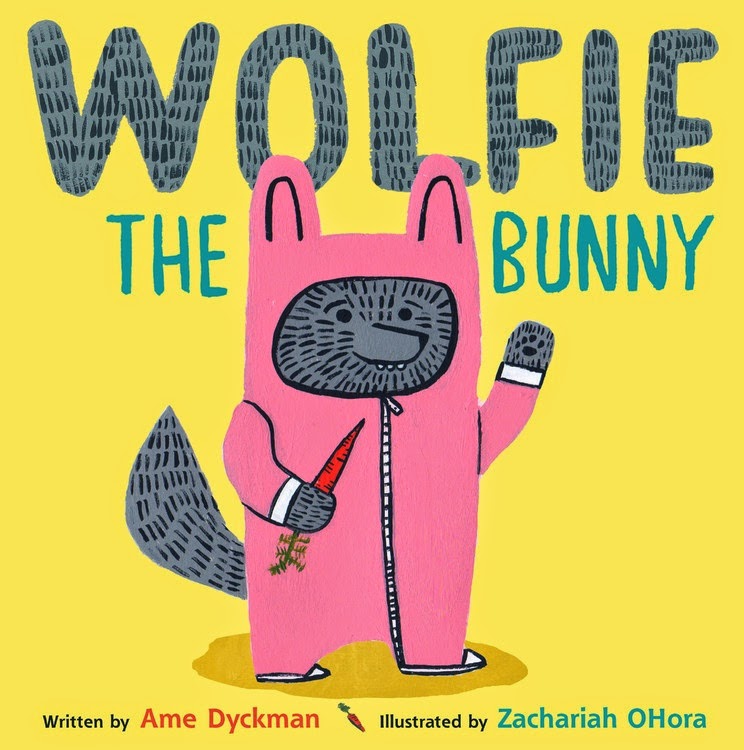 When you want something more than anything else, sometimes you see what you want to see.  Your belief defies common sense or the very laws of nature.  Wolfie The Bunny (Little, Brown and Company, February 17, 2015) written by Ame Dyckman with illustrations by Zachariah OHora is full of one surprise after another.

The Bunny family came home to find a bundle outside their door.

Lo and behold when Mama, Papa and Dot take a look they discover a baby wolf.  Thrilled could not even begin to describe the glee the parents feel.  Dot, on the other hand, is sure the family is doomed to be an entree.

Dot does not dare sleep a wink at night.  She is like a voice crying in the wilderness, a voice of reason, amid all the picture taking and praise making of her mom and dad.  Her friends can see the problem but her parents are blind to reality.

Wolfie does hear Dot and her friends.  To her distinct displeasure Wolfie decides to become Dot's new best friend, shadowing her everywhere.  Wolfie does not stay little for long.  Everything is growing on this Canis Lupus including his appetite.

The Bunny family cupboard, like Mother's Hubbard's, is completely bare; there is not a carrot in sight.  Bag in hand Dot leaves for the market but to her disgust Wolfie wants to help.  Ever ready to fight for her life, Dot's suspicions are confirmed when at the market Wolfie's mouth opens wide.

A massive bear makes his presence and purpose known.  It's time for some bunny-tastic action.  A bunny does what a bunny needs to do.


The first thing you notice about the text of this title is the pure flawless pacing designed by author Ame Dyckman.  The play of dialogue between Mama and Papa and Dot will have you howling with laughter no matter how many times you read it.  The added sentences in the voice of an unseen narrator elevate the humor even higher.

Dyckman has us all following with the back and forth cadence between Dot and her parents, only to throw in a couple of twists near the end.  A bear can do this to a plot.  A bear can change everything; everything for the better.  Here is a sample passage.

Mama served carrots for breakfast.
"He likes them!" said Mama.
"He's a good eater!" said Papa.
"Speaking of eating," said Dot,
"HE'S GOING TO EAT US ALL UP!"

But Mama and Papa were too busy taking pictures to listen.


We've all seen wolves dressed up in sheep's clothing in children's literature again and again but rarely, if ever, have we seen one dressed to the nines in a pink bunny suit grasping a carrot in his paw.  On the back of the matching dust jacket and book case are three snapshots of Wolfie taken from interior illustrations.  (The book case back is different but my lips are sealed.) The spine has tiny face pictures of Wolfie and Dot along with a trio of teeny carrots.  Already the attention to detail by Zachariah OHora is notable.

The opening and closing endpapers done in the same pink as the suit provide a background for the faces of Mama, Papa, and Dot in a pattern with a bunch of carrots framing their faces on the bottom of each.  A single portrait of Wolfie can be found in the mix.  On the verso we see Dot in her red hooded jacket, arms on her hips, looking with a no-nonsense glare at Wolfie in the basket beneath the title on the opposite page.

Most of the illustrations rendered in

span two pages.  OHora extends the text with his size shifts and perspectives, zooming in on the characters to add emotional impact.  His use of white space in several images is fantastic as is the limited color palette.  The heavier black lines, a signature style, especially for the fur works to marvelous effect.  Readers will delight in the details; the cameras used by Mama and Papa, the carrot on Wolfie's bib as he sits in his high chair, Mama knitting the bunny suit, or the design on the bear's T-shirt and the items in his shopping basket.

One of my absolute favorite illustrations is the first night Wolfie and Dot sleep together.  It's a close-up of their faces with the covers pulled up around their necks.  Dot is wide awake wearing a head lamp, shining it at a blissfully asleep Wolfie.  The shadow cast by her light shows a grinning wolf behind Wolfie.  In this picture the only colors are black white, gray, golden brown and a spot of red on the lamp band.


Wolfie The Bunny written by Ame Dyckman with illustrations by Zachariah OHora is going to be one of 2015 best books.  The mix of writing and pictures invite, no insist, this book be read aloud.  For even more fun, if that's possible, try it as a reader's theater.  I've read this book over and over.  Every single time I continue to laugh especially at one phrase by Dot before they head to the market.  The look on her face with those words will have listeners rolling on the floor in fits of giggles.  Both Ame Dyckman and Zachariah OHora have notes at the book's end which you should read.  I'm off to stock up on carrots.

To discover more about Ame Dyckman and Zachariah OHora please follow the links attached to their names to access their websites.  Zachariah has several proposed dust jackets shown on his blog at Tumblr.  Zachariah is interviewed at Seven Impossible Things Before Breakfast by author and blogger Julie Danielson and at The Little Crooked Cottage.

When I communicated with Ame recently she said she had a sort of fuzzy without glasses image of Wolfie following her around as she wrote this book but when she saw Zach's early sketches he appeared crystal clear, perfectly perfect.  Zach was gracious enough to send me three sketches showing the evolution of Wolfie.  What's not to love about this guy? 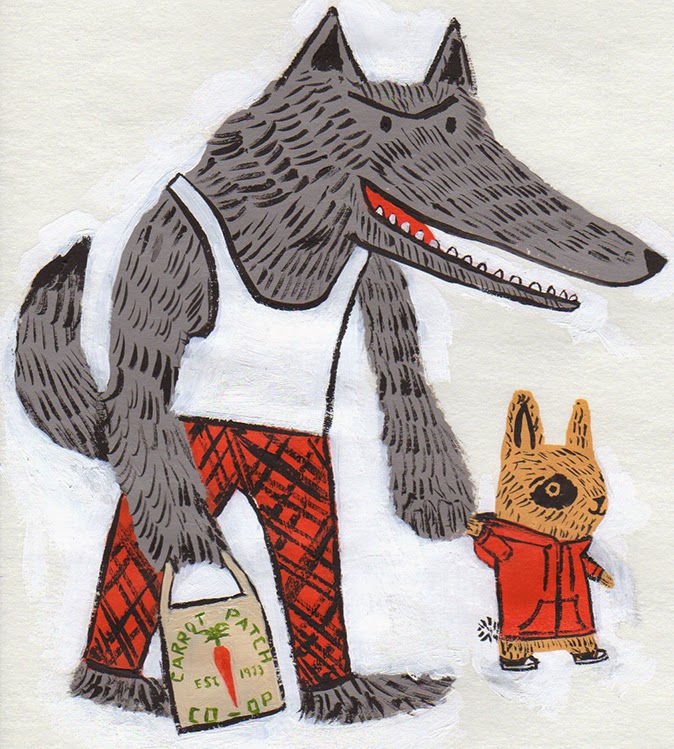 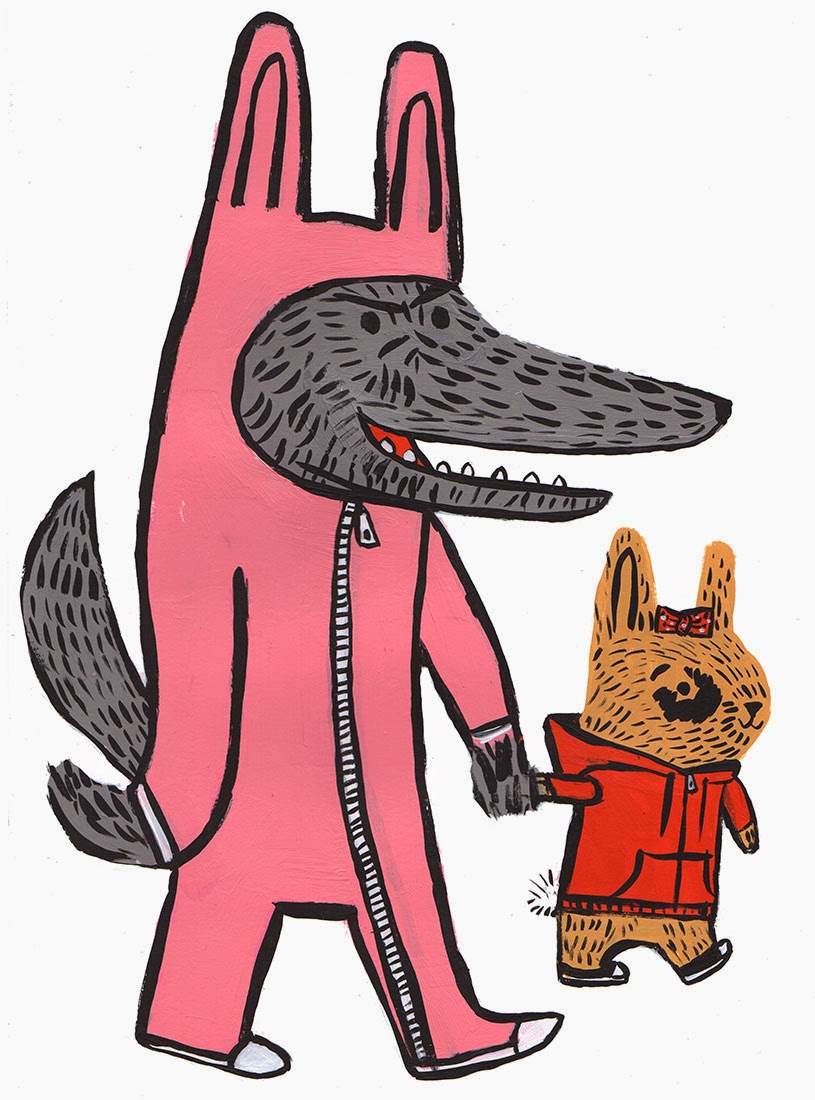 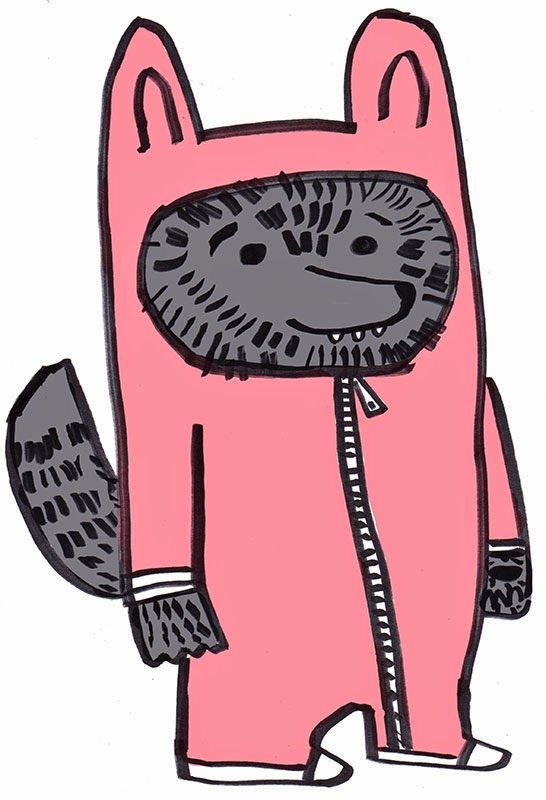 Update:  Ame Dyckman and Zachariah Ohora are guests at KidLit TV twice.  Follow this link to view videos about this book.  January 15, 2016