Have you ever noticed how the familiar things you walk by every single day may suddenly get your attention? When you stop and stare you wonder why you never fully appreciated what has currently grabbed your focus.  It may be the slope of snow sculpted by the wind, a tiny bird's nest comfortably resting in the bare branches of a tree, the way a folded blanket drapes across the back of a chair or the new grayness around your dog's face.  There is a special contentment in the simple. 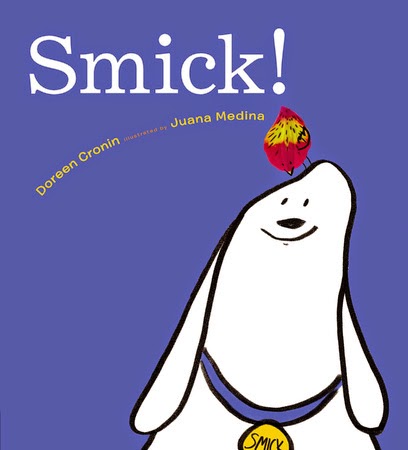 For our youngest readers and listeners learning to appreciate the music of language, a few words can become a melody moving through their minds.  Taking commonplace things and putting them together can create pure playfulness.  Smick! (Viking, an imprint of Penguin Group (USA), February 10, 2015) written by Doreen Cronin with illustrations by Juana Medina does this superbly.

Having heard his name called, Smick, one ear cocked, is ready for action.  Tail wagging he easily follows the request of the unseen speaker.  He receives phrase with a doggy smile on his face.

One word, the next word, makes him sit up and take notice.  The word is stick.  For reasons unknown to me, dogs love sticks. (I have seen Xena drag sticks three times her size down roads, through fields and out of the water in total bliss.)

With one thought in his mind, he retrieves the thrown stick in mere seconds.  What he hears next is a tad bit unusual.  It sounds like a chicken.  It's a baby, a mere bundle of fluff.  Wow!

When seen side by side (Chick and Smick), it's easy to see Smick is a big dog, a big, big dog.  He's huge! Smick crouches down ready to play but he needs to proceed with care.  When you add Chick, chasing a stick and Smick together you get a rousing romp of goodness.


After I had read this book multiple times, I couldn't help but think about which word came to author Doreen Cronin first, Smick, Chick or stick?  Or what picture popped into her head before the others, was it the dog, the baby chicken or the stick?  Did she see something which sparked the idea for this story?

The most words read in combination are three.  Usually all that appears is a single word.  It's the use of punctuation, a comma, a period, a question mark, or an exclamation point, which determine the rhythm of the narrative.  It's spirited and catchy.


Rendered digitally in combination with alstroemeria petals and rosemary tree sticks the illustrations of Juana Medina are in lively synchronization with the narrative.  The royal blue background spanning the dust jacket and matching book case make Smick and Chick the perfect pals to bring on readers' grins.  On the back, left, we see the back portion of the duo in the same position. The opening and closing endpapers with the identical blue background are a series of nine new poses of Smick and Chick together; upside down, running, resting, walking away from and running toward us.  They are, in two words, utterly charming.  The picture for the title page spreads from left to right featuring the stick in Smick's mouth.  Chick is perched on the tip.

Crisp white pages make Smick, shaped with thicker black lines (and sometimes Chick), the real stick and Chick formed with flower petals seem like they could jump off the pages at any minute.  Medina alters her perspective of Smick, making him smaller or larger in response to the action of the story.  She crosses the gutter with energetic abandon just like Smick.

One of my favorite of many images is when Smick first encounters Chick.  The speaker cries out

Smick is lying down, larger than life on the left spanning over the gutter to the right.  Wings sticking up in the air is Chick calmly walking right by Smick's nose going toward the left edge.  You can feel the gentle tension wondering what the page turn will bring next to readers.


It's easy to understand why the first three letters of the dog's name are the first three letters in smile. That's exactly what readers will be doing from beginning to end of Smick! written by Doreen Cronin with illustrations by Juana Medina.  My gaze was captured by the dog on the cover but the spare rhyming text masterfully combined with the pictures makes this a little treasure for the youngest listeners and readers (and those of us young at heart).  Make sure to read this aloud with zip and zing.

To learn more about Doreen Cronin and Juana Medina please follow the links attached to their names to access their websites.  Julie Danielson, author and blogger at Seven Impossible Things Before Breakfast, featured the artwork from this title.  Enjoy the book trailer.


Note to reader:  I am not sure of the gender of Smick so feel free to substitute female pronouns whenever you wish.
Posted by Xena's Mom at 6:46 PM