On The Other Hand...

If I had a nickel for every parental proverb heard when growing up (and thereafter), I could fill the shelves with books in a new school library.  Two of the top contenders were "Haste makes waste" and "Many hands make light work" with "The grass is always greener on the other side" coming in at a close third.  When, in the course of my teaching, the opportunity presents itself when one of these might be appropriate, I seal my lips rather than succumb to any adult adages. 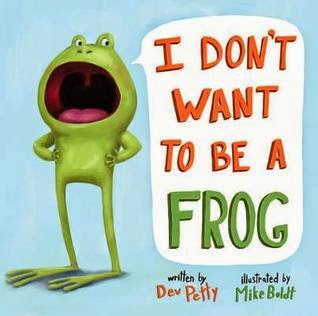 Arguably there are times when situations demand speed and doing a project yourself makes more sense.  Unless you are comparing an estate maintained by a gardener with an overgrown vacant lot, experience teaches us appearances are not necessarily what they seem.  I Don't Want To Be A Frog (Doubleday Books for Young Readers, February 10, 2015) written by Dev Petty with illustrations by Mike Boldt explores with hilarity the drawbacks and benefits of being yourself.

When a junior frog boldly proclaims a desire to be a cat, he is told he can't.  When he inevitably asks why, he is told the obvious.  He is, after all, a frog.

Since being a cat is out of the question, he switches to wanting to be a rabbit.  They both can hop, right?  It is pointed out with patience his lack of matching physical characteristics.  He does not want to be a frog; he finds his attributes less furry and er...too froggy.

Next he declares with gusto his wish to be a pig.  There are a couple of problems that nix this request.  He finally gets overwhelming agreement when he mentions being an owl but then four reasons for this impossibility are listed in momentary frustration by his father.  At this point it looks as though the youngster is doomed to continue participating in one of his many complaints; bug eating.

Suddenly a shadow looms.  A voice makes inquiries and shares a secret about cats, rabbits, pigs and owls.  With instantaneous insight our chief protagonist comprehends the virtue of his identity.  One final point is offered as the ominous visitor leaves.


Even before I read this aloud the voices of the young and adult frogs and the hungry mentor were taking form in my mind.  Dev Petty tells the story entirely in dialogue; a back and forth exchange between the frogs and the final creature.  Each sentence, question and answer is succinct but liberally laced with humor because regardless of what the son says, his father simply replies by stating what any observer would notice. Here's the continuation of their first exchange after the first line.


Readers will hardly be able to keep from bursting out with glee when looking at the front of the matching dust jacket and book case.  The body posture of the son, mouth open wide, proclaiming his distaste for his nature is comical with a capital C.  On the back, to the left, illustrator Mike Boldt has designed a series of framed shapes which immediately reminded me of Hollywood Squares.  In each window we see a character or an extension of a character plus the ISBN.  Out of little frog's mouth we see the words,

Would YOU want to be a Frog?

The opening and closing endpapers done in pale blue feature a frolicking owl, cat, pig and rabbit along with the frog.  He is pictured differently in the two spots indicative of the narrative.  Boldt begins his interpretation of the story on the title page with the frog reading a book about cats.

All of the text is bold and encased in loosely shaped speech balloons.  The background colors highlighting the animals are either white or one of a variety of pastel hues.  It's the shape of the frogs' bodies, eyes and mouths which will have you giggling from page to page.  The father wearing glasses is an added detail contributing to the fun.

Mike Boldt may choose to show us their entire bodies or only a portion, zooming in for a close-up or backing away to give us a larger picture.  He increases the laughter factor when he lets us know how exasperated the dad is at a particular moment.  As the father pulls down a screen like a teacher in a classroom pointing out reasons his son can't be an owl, we understand his need to provide visuals.

One of my favorite illustrations (of many) is at the very beginning.  The page is entirely white except for the text

the head of the son peeking in from the lower right-hand corner.  The look on his face speaks volumes...all funny.


I Don't Want To Be A Frog by debut picture book author Dev Petty with illustrations by Mike Boldt will have readers of all ages laughing as soon as they read the first sentence until long after the final words are read or spoken.  Be prepared to hear shouts of "read it again".  This is a lively look at not only being okay with who you are but being thankful.

To explore more about Dev Petty and Mike Boldt take a look at their websites by following the links attached to their names.  John Schumacher, teacher librarian extraordinaire and blogger at Watch. Connect. Read. hosted the book trailer and an interview with Dev Petty.  Earlier he had Mike Boldt as a guest.  Super teacher librarian Matthew C. Winner interviewed both Dev Petty and Mike Boldt on his Let's Get Busy Podcast.  Here is a link to four printable activity pages for this title.  In addition to interior pages which can be seen at Mike Boldt's site, the publisher has others shown here.  Guest posts written by Dev Petty can be seen at Tara Lazar's blog, How Dev Petty Wrote a Story with Legs...Frog Legs! (plus a giveaway), and at the Nerdy Book Club, Stop Making So Much Sense and Finding The Words.
UPDATE:  Here is a brand new story time kit.
Posted by Xena's Mom at 8:14 PM