In Search Of Marine Giants

To be able to see creatures in zoos and aquariums is a mixed blessing; an ongoing debate in my mind.  These institutions give visitors the opportunity to observe species from all over the world; animals they might never get to see in the wild.  On the other hand, seeing them in zoos and aquariums makes me wish they could live free in their natural habitat.  Now more than ever it seems the purpose of good zoos and aquariums is to provide sanctuary, a chance for research and the preservation of endangered species.

Mentioned previously on this blog was my visit to Shedd Aquarium in Chicago.  For me to see belugas was a remarkable experience and to this day unforgettable.  Last evening I briefly spoke with author Jess Keating (How To Outrun A Crocodile With Your Shoes Untied, Sourcebooks Jabberwocky, June 3, 2014 and recently, How to Outswim a Shark Without A Snorkel, Sourcebooks Jabberwocky, January 6, 2015) about zoos and aquariums.  She made some important points.

...a place where people (especially kids) can go to fall in love first hand with them.  (To me) people are more willing to share the world with those they care about.  And seeing first hand is the first step in that caring which hopefully will lead to education and future conservation.

The proportion of money zoos and aquariums spend on research and suitable habitats for the animals versus "entertainment stuff" is often indicative of really great quality of life for the creatures, too.  Obviously some are terrible, but for the most part, they are trying to do their part to keep the options there, and foster that love of animals in others.

In the case of whales, I think that more is definitely needed to ensure their emotional health in captivity, but people seem to be starting to realize that the current situation with their keeping isn't good enough.  That's not great, but it's definitely a start! 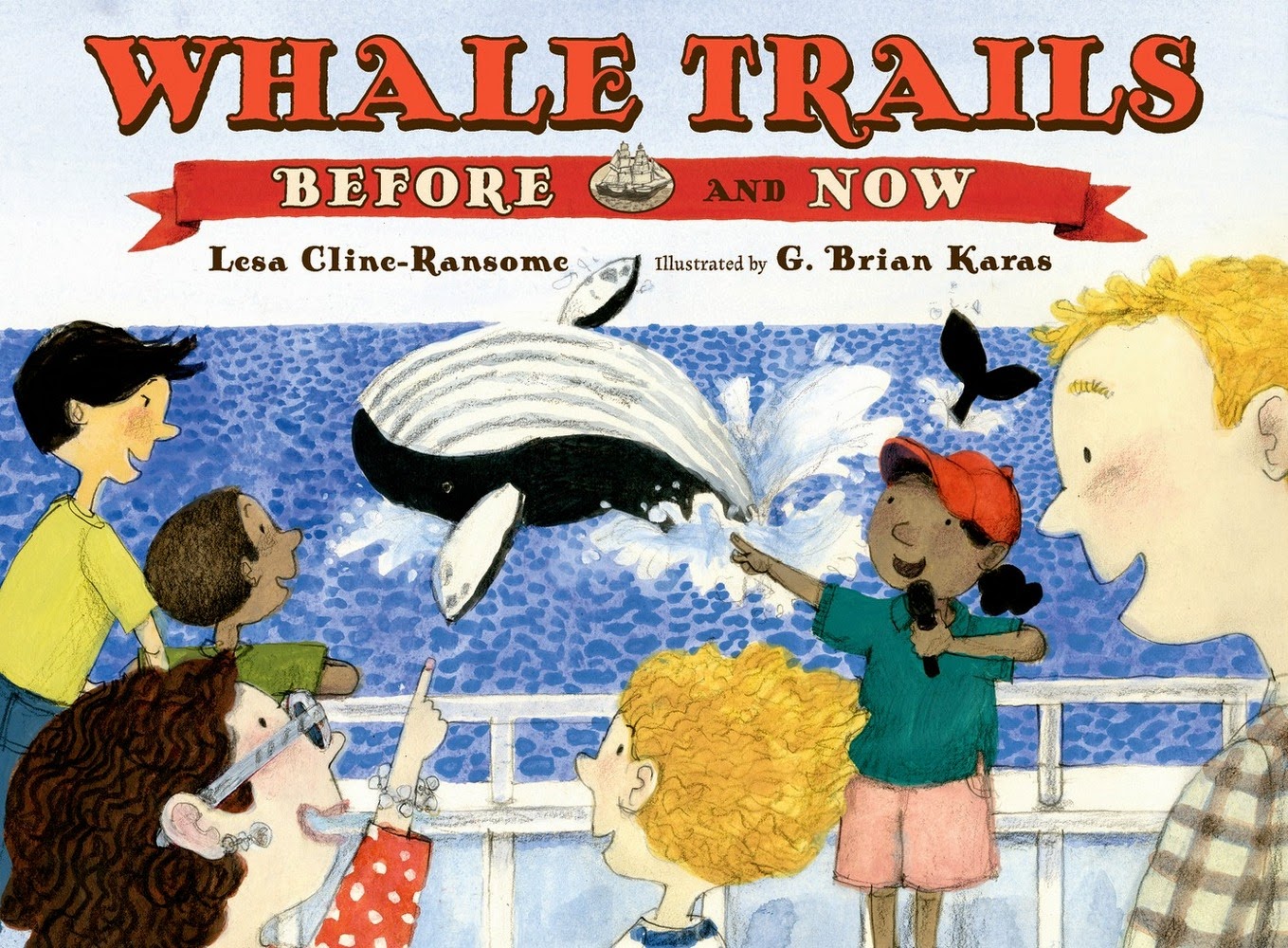 Author Lesa Cline-Ransome and illustrator G. Brian Karas offer another choice for seeing these beautiful mammals of the seas and oceans, whale watching.  In their new title, Whale Trails: Before And Now (Christy Ottaviano Books, Henry Holt And Company, January 20, 2015) they depict the transformation in the relationship between whales and people.  It's a documentation of a journey I trust will never end.

My father and I live for the sea.

The narrator, a young girl, is getting ready to join her dad, the captain of the Cuffee, on their daily excursion to whale watch.  Passengers gather on the dock as she hands out brochures of what they can expect to see today.  She then takes us back to earlier generations of her family when it was believed whales were feared creatures of the deep hunted for their baleen and blubber.

Alternating between the present and the past she explains how the trip taken today on the Cuffee contrasts with a ship getting ready to hunt for whales.  The Cuffee will leave when the day cools; the whaler left at the end of summer.  The more temporary huts lining the dock today are designed to serve a distinct clientele as opposed to the more practical shops serving the shipping community many years ago.

All the people boarding the Cuffee hope to see whales due to their love of these creatures.  The crew on the whaler hoped to see whales to gain wealth.  Perhaps some longed for adventure and simply loved being at sea.  Construction materials used in the whale watching boat are compared to those used in making vessels long ago.

Those hunting whales with their eyes and binoculars can expect to be out on the water for no more than three hours.  It might have taken the hunters of old three years to complete a successful voyage depending on their route and stops in various ports.  What our narrator carries in her backpack for supplies is decidedly less than the whaling ship then and nowhere near as lethal.

Unlike today, in the past, whales had a speed advantage over the ships.  The thrill of sighting a whale, even the type of whale, might be the same but the means and amount of time necessary have changed.  Harpoons have been replaced with cameras.  Days of work, cleaning and repair have been exchanged for a leisurely joy in the journey.  Now at the end of the day the whales are free; free to travel along the watery roadways of our planet.


By using the voice of a young girl whose family has been a part of searching for whales, Lesa Cline-Ransome brings a valid energy to the story.  Speaking in sentences using word choices appropriate for her age, we are given the inside scoop on a typical day aboard a whale watching boat and keen insight into the life surrounding and on a whaler of long ago.  For each piece of information shared, a short explanation becomes a part of the conversation.  By beginning each portion of the past story with the words, before now, a continuity is established.  Here are two comparative passages.

The pier where our boat is docked is lined with booths that sell souvenirs, sunglasses, binoculars, and sunscreen.

Before now, the pier was lined with the shops of shipbuilders, candle makers, blacksmiths, and sail makers.  Blacksmiths made bolts, rings, chains, anchors, and many other ship-related necessities.  They also made whaling tools, such as toggles and lances.


The spots of red on the front of the matching dust jacket and book case add to the joy and warmth we can see on the faces of the whale watchers.  It also draws our attention to the narrator of this book.  On the back, to the left G. Brian Karas uses subdued shades of blue and a pale golden yellow as a background.  The image is divided in two with blue on the left and yellow on the right.  For the present, blue, we see the whale watching boat.  To the right is a whaling schooner floating on the water.  Beneath them both is a whale nearly stretching across the entire page.

Two images, one from the present first, and one from the past, second, are featured on the opening and closing endpapers.  Large expanses of sky and water highlight the glimpse of a whale spout or fluke.  Waves and spray surrounding the Cuffee, decks filled with people, as it moves through the water is framed in an oval beneath the title.

Throughout the body of the book the illustrations, rendered in gouache and acrylic with pencil on Arches paper, reflect a full color palette for the present and hues of the pale golden yellow, brown and black to designate the past.  Intricate details in both sets of pictures, the present and past, indicate research.  For the illustrations of now Karas extends them edge to edge on single pages or for one across two pages.  All the visuals of the past are framed with fine lines and large amounts of the background color.  It's as if we walking through a museum looking at snapshots of history.

One of my favorite sets of images is of the pier now and then.  There is an air of anticipation on all the faces of those waiting for the three-hour excursion out to sea in comparison to the people going about their business, walking in front of all the shop buildings catering to an industry focused on shipping.  It's interesting to see the architecture and styles of clothing side by side.  I have to also add the double-page spreads for the before and now sightings of the whale are a welcome change and very well depicted.


To see and read the depiction of our connection to whales from dependence to preservation in Whale Trails:  Before And Now written by Lesa Cline-Ransome with illustrations by G. Brian Karas is to be filled with hope.  The Author's Note by Lesa Cline-Ransome at the end is a must read.  She explains how her research for another manuscript and her daughter's field trip resulted in this book.  A short Glossary and Further Reading sections are included.  Readers will be fascinated with every page of this title.


To learn more about Lesa Cline-Ransome and G. Brian Karas please visit their websites by following the links attached to their names.  If you stop by the publisher's website you can see eight interior images from this book.  I think this book would pair well with two other whale titles recommended here, If You Want To See A Whale written by Julie Fogliano with illustrations by Erin E. Stead and Breathe written and illustrated by Scott Magoon.

I am adding a video Jess Keating recommended where Jane Goodall is being interviewed.  She is speaking not about whale watching but zoos.  Her mention of a whale at the end is significant to this post.  Jess pointed out:

...Jane Goodall's thoughts on the matter are spot-on, and I share her beliefs on the role of zoos.  One line in particular stands out to me, The role a zoo can play in education is huge if it does it right.

UPDATE:  Jess Keating has found another relevant article about zoos and the care of animals.  I think this relates to what I hope is a shift in thinking about animals in captivity.  If we can't see them in the wild, perhaps we can make their homes more wild-like.  The Future Of Zoos Is Being Nice To The Animals---Not Making It Easy To Watch Them
Posted by Xena's Mom at 3:05 PM