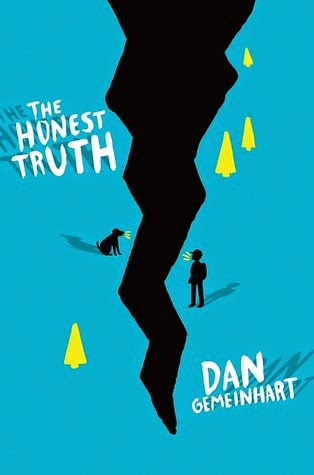 It's a decision made from heartache; a chance to control your destiny.  It's trying to be strong in the face of fear.  The Honest Truth (Scholastic Press, January 27, 2015) debut novel of teacher, librarian and father of three, Dan Gemeinhart introduces us to twelve-year-old Mark who chooses to reach for the top as long as he is able.

The mountain was calling me.  I had to run away.  I had to.

The mountain calling to him is Mount Rainier in the state of Washington.  In alternating chapters we travel with him and his dog, Beau and listen to his best friend of years at home, Jessie, describe the reactions of his parents and the secret she carries.  Over the course of several days and nights and hundreds of miles we hang on tight following the emotional and real life roller coaster ride right along with these two people.

Mark has a backpack with his notebook, food, gear and saved money along with his camera, the kind using film.  He's carrying a duffel bag for Beau to climb into when he needs to stay hidden.  He believes he is as prepared as he can be for this kind of trip, a trip steeped in a pledge.  What he does not take into consideration are the people he meets and the impending winter storm.

Jessie's concern for Mark grows as the police continue to come up empty-handed in their search for him.  Their shared experiences bind her as close to him as two people can be without being in the same skin.  Their past promises keep her silent.

We know the comfort of the glowing windows in a diner on deserted streets.  We know the pain felt when dangers lurking in the shadows inflict harm.  We know the relief of singing women in a kitchen.  We know the panic when a path taken threatens to steal away life.  We feel tired; straight to the core, I-can't-go-any-more tired.  Most of all we know truth, the honest truths discovered, or already known, by the characters.


Before we have even read a single line of the narrative the chapter heading page in a black background with a white crevasse, black text reading CHAPTER 1 and white text reading MILES TO GO:  263 establishes a journey to be taken; as a reader a type of tension starts to build.  In the subsequent chapters for Jessie the background is white with a black crevasse.  Her chapters are always the number plus a half.  This is an excellent technique for bringing us more intimately into the story.

Author Dan Gemeinhart describes his characters and their situations expertly, until we feel as though we know each one of them personally, even those who enter the plot briefly.  It's in the little details, the looks on their faces, their body posture and their actions.  Even those hardened by life, committing crimes or following rules, find it in themselves to extend small kindnesses.

We should all wish for friends like Jessie and Beau and strangers like the park biologist Wesley.  Jessie carefully weighs all the conversations she has had with Mark over the years, torn between two rights but as loyal as Beau.  You can tell Gemeinhart has known the love of at least one dog.  Each moment between Mark and Beau is portrayed with moving sincerity.  Wesley's wisdom born of his own grief and his compassionate understanding of Mark are extraordinary chapters.

Here are several passages from the book.  One other technique Gemeinhart employs, along with his cliff-hanger chapter endings, in his writing is the use of the word truth.  As the story progresses, reaching a breaking point, it appears more frequently.

Beau was a small dog.  But size doesn't tell you anything about how important something is.
Beau came out of that duffel bag like hot burning justice.  Like all the right kinds of anger.  Like everything the world ever needed.  He came out into the darkness and the blood of that cold city street fast and loud and hard, all teeth and bark and bravery.

Scared.  A morning walk.
A question needs an answer.
Knuckles on the door.  (Haiku is a significant part of the story.)
Mark's mom answered.  She looked like she hadn't slept all night.  Jessie rubbed Mark's note between her fingers in her pocket.
"We haven't heard anything, honey," his mom said.  "I'm sorry."
"Why did Mark run away?" Jessie asked the question quick, before she lost her nerve.  There was no time for "good morning."  And it wasn't a good morning, anyway.

His next words weren't quite so smooth, not quite as low and even.  "A daddy is supposed to keep his kids safe.  He's supposed to protect them.  That's all there is to it.  That's the truth. ..."


Several days ago I stayed up until 2AM to finish this book.  Just moments ago I finished it again.  Some books like The Honest Truth written by Dan Gemeinhart need to be read more than once.  There is so much life in them they must first be taken in huge gulps, then again a little at a time to fully appreciate the beauty.  I highly recommend this title; a must read 2015 book.

For more information about Dan Gemeinhart and his work follow the link attached to his name to access his website. Dan Gemeinhart was interviewed at The Sweet Sixteens and at the American Booksellers Association.  Dan Gemeinhart is featured at teacher librarian extraordinaire and blogger John Schumacher's Watch. Connect. Read. Please take the time to watch each of the videos created by author Dan Gemeinhart.  They add to the richness of the reading.