When studies in folklore are offered in classrooms it seems legends and myths are two terms frequently tied together.  In my way of thinking the two are completely different.  A tiny shred of truth, not necessarily verified, over time is enhanced with each telling until fact becomes shrouded in fiction as in the tales of Robin Hood or King Arthur.  This is what legend means to me.

The myths of any particular culture are explanations of why certain historical events or natural phenomenon occur including the origin of the world.  A mythology of a certain people is like a religion which they endorse and follow.  The mythologies of which I have enjoyed reading the most, for as far back as I can remember, are those of the Norse and Greek gods.

Five years ago author illustrator George O'Connor released the first book of twelve to begin his Olympians series of graphic novels, his retelling of the classic Greek myths.  I recently finished rereading the earlier titles and read the most recent ones for the first time.  The first six, Zeus, Athena, Hera, Hades, Poseidon and Aphrodite while seeking to focus on the titular god also introduce other events and beings intertwined in their immortal lives.  The point of view or voice(s) in each volume varies in order to best present the Olympian.

In Zeus his story is told with respect to the creation of the world and the order of the gods, the battle for power between the Olympians and the Titans and the roles of the Cyclopes, Kronos and Metis. It is the three Moirae who spin the tale of Athena's extraordinary birth as daughter of Zeus, her training in the art of warfare, learning to be thoughtful before taking action, and the downfall and destruction of Medusa by the hand of Perseus.  The story of Hera, Zeus' queen begins with their courtship and her demand for marriage but she is also well aware of Zeus' many infidelities and countless children. One in particular, Hercules and his twelve tasks, becomes the center of revealing to us the personality of Hera.  Demeter and her daughter Persephone assist us in understanding death and Hades.  We are able to see him in a different light as well as the strength of a mother's love.  The children of Poseidon, Odysseys, and the Minotaur are all significant in explaining his position as god of the sea and his unresolved acceptance as ruler of that realm.  In learning about Aphrodite her three attendants, Charites, are the narrators acquainting us with Eros and Eris.  A contest to decide who is the more beautiful, Hera, Aphrodite or Athena, has repercussions which will plague mankind with the ravages of war. 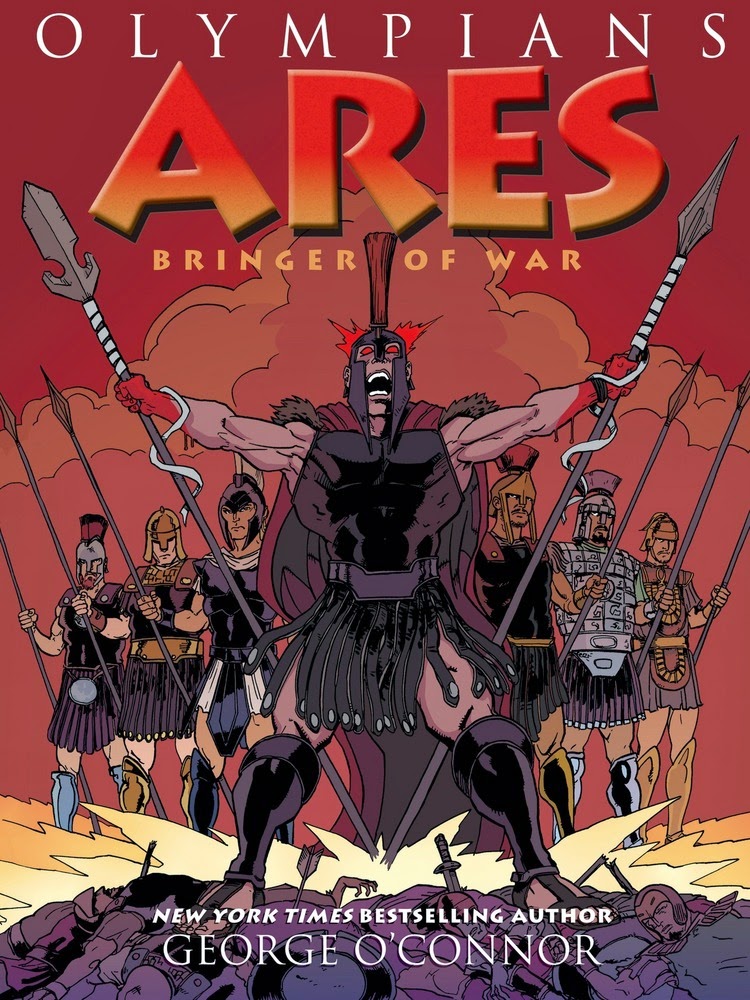 TO KNOW THE GREAT GOD ARES,
YOU MUST FIRST KNOW HOW HE
DIFFERS FROM ATHENA.

Unlike his counterpart, Athena who works with strategy and a plan in her approach to warfare, Ares relishes in the point when in the heat of battle, the lust for blood, the rage of revenge and the desire for all-out chaos overcomes any thoughts of order.  For ten years a fight has been fought between the Greeks and the Trojans.  The presence of both Ares and Athena has been felt by the men on the battlefield but all grow weary of a conflict which seems to have no end.

Zeus calls a council of the gods and their children on Mount Olympus in order to see this Trojan War end.  Regardless of the discussion, arguments between those favoring one side over the other, on Mount Olympus, the mortals have decided to have two men determine the fate of this war.  All is well until Aphrodite intervenes.  Then unbeknownst to Zeus both Athena and Ares return to the field of battle.  Athena has already altered destiny but she asks Ares to stay his hand and avoid the wrath of Zeus.

From Mount Olympus the gods watch but are unable to keep from exerting their influence.  Heroes from the Iliad spring forth in the narrative, Diomedes and Aeneas, Patroclus and Hektor, and Achilles.  As the battles continue on the mortal plain, a fight begins on Mount Olympus between Ares and Athena, between those favoring the Greeks and those favoring the Trojans.  A barbaric act by one of the earthly warriors costs him dearly.  One by one the gods lose interest in this Trojan War; all except Ares.  In a final conversation between him and his father, Zeus, we come to understand that beneath his apparent thirst for blood is the sure knowledge his actions are a part of his destiny.


In the six prior books and this newest title, for all his reading and research, one might expect George O'Connor to speak above his audience but he does not.  In his writing he provides understanding for his readers, wanting us to develop the same passion for Greek mythology as he has.  He speaks to us.

The narrative and dialogue between the gods is in a contemporary language.  It reveals to us the essence of Ares (and the others) depicting weaknesses and strengths.  Regardless of his desire for the constant conflict with bloody results, when asked to wait, he waits.  He may seem to act without conscience or care for human life but the loss of his son shows us otherwise.  O'Connor, in his interpretation of the most original versions he can find, strives to give us Ares Bringer of War as he is meant to be.  Here are some sample passages.

And that is when Ares takes the field.
He arrives in a chariot driven by his sister-in-arms, Eris, the goddess of strife and discord.
Ares, war insatiate. His armor blazing like fire. Dealing death.

Ares:  I am under no one's sway!  I am Ares! God of War!
Athena:  God of Getting Stuck Like A Pig, you mean!
Ares:  You! You maddening gadfly!  Biting and flitting about the field!  I'll make you eat those words!!
Athena:  Bring it blowhard!

What makes this volume as good as the others are the extras George O'Connor adds.  In the front is a lineage chart beginning with Gaea, earth. At the conclusion O'Connor sets forth a conversational Author's Note informing his readers about his approach in telling this story of Ares.  He is careful to disclose why he includes what he does in each volume.  A page is devoted to Ares; naming what he is god of, his Roman name, symbols, sacred animals, sacred places, his day of the week, month, heavenly bodies associated with his name and his modern legacy.  Explanations for Eris and Achilles are also given.  What is truly interesting to read are the G(R)EEK NOTES.  O'Connor's remarks about pages and panels are not only informative about the series but downright funny.  He wants us to notice all the added details in the text and his illustrations.  There are eight questions for discussion, a bibliography and print sources for younger and older readers.


The color palette shown on the front of the book case is prevalent throughout this title.  (What you can't see on the cover here is the blue foil inlaid in Ares' two spears.) O'Connor's panel sizes and placement create the pace for the story. For the most part straight narrative is placed within rectangular boxes with dialogue in speech bubbles.

O'Connor may have elements from one panel extend into another to direct the flow of our eyes.  Every line and every item are part of a well-conceived layout. There is never any doubt as to the mood of the characters.  The action scenes literally jump from the pages.  You would hardly be surprised to hear the sounds of battle at any moment.

Olympians Ares Bringer of War written and illustrated by George O'Connor is an outstanding volume in an already stunning presentation of the Greek myths.  It's a rare thing when mythology is presented in as a compelling form as this.  George O'Connor's dedication to this subject is evident on every single page.

To learn more about George O'Connor and his other work please visit his website by following the link attached to his name.  This link will take you to the Olympians website. For each title an excerpt can be downloaded, there is a reader's theater and other extensions.  To access the Olympians blog follow this link.  O'Connor is hosting other illustrators' versions of Ares.  On both the Olympians website and blog, you can see the processes used by O'Connor for creating these books.

A link to the publisher's website provides you with a look at interior pages from this title.  At Watch. Connect. Read. hosted by teacher librarian extraordinaire, John Schumacher, George O'Connor stopped by twice; to chat both times with questions, answers and sentence starters and to show readers the new cover and to announce the book release.   Educator Colby Sharp, the man who stands on desks to proclaim his love of reading, interviews George O'Connor here at his blog, sharpread.

Make sure you take the time to watch this interview with George O'Connor by Rocco Staino on KidLit TV.  It's informative and completely entertaining.


Here is a link to the other bloggers participating in this tour.
Posted by Xena's Mom at 1:14 AM