A Sweet Delicacy Travels Through Time

There is an abundance of moments brimming with calm (not to be confused with quiet), comfort and connection when people gather to share a meal.  If it's been prepared by one or more of them, it's even better.  It's almost like a dance when you work with someone in the kitchen making food for family or friends. 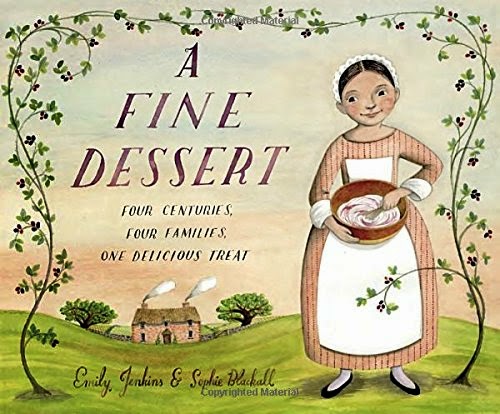 Some of my most treasured items are handwritten recipes from those friends and family members.  They are like Valentines, expressions of love and a willingness to share something of value.  A Fine Dessert:  Four Centuries, Four Families, One Delicious Treat (Schwartz & Wade, January 27, 2015) written by Emily Jenkins with illustrations by Sophie Blackall offers readers an opportunity to follow a recipe from place to place from time to time.

A bit more than three hundred years ago, in an English town called Lyme, a girl and her mother picked wild blackberries.

They picked with purpose but enjoyed an occasional taste as they filled their baskets. Saved cream from daily milk given by their cow was beaten with twigs gathered and bound in a bunch.  Fifteen minutes passed before the cream was whipped.

Washed with cool clean well water the berries were smashed and strained in muslin to remove the seeds.  Added sugar sweetened them before they were folded into the whipped cream.  To wait to be eaten with supper, the confection was stored near ice carefully saved inside a cellar carved within a nearby hill.  It was served to the immense satisfaction of the family with the younger cook later savoring every last taste from the bowl.

This is the pattern painted with words in which the three other places, Charleston, South Carolina, Boston, Massachusetts and San Diego, California are visited.  For each the gathering and assembling of the ingredients alters.  For each the people who enjoy the dessert changes according to the historical period in which they live.

When we move forward one hundred years, a mother and daughter again picked the berries but they were slaves on a southern plantation.  The utensil for beating improved from wood to wire as had the acquisition of the cream.  Storage prior to dinner was now inside in a specially conceived box in a basement.  The mother and her daughter hid to enjoy the last of the blackberry goodness from the bowl.

In the year 1910 a girl and her mother purchased the blackberries from a street vendor.  The cream in a glass bottle was delivered in the morning.  After a cookbook was consulted for the recipe, beaters cut the whipping time to five minutes.  Water for rinsing and storage for cooling were accessible in the kitchen.  When the time was right nothing was left in the mixing bowl.  It was licked clean.

About five years ago a father and his son went to a store to purchase the berries and the cream.  While his dad used the computer to locate the recipe, the boy whipped the cream with an electric mixer.  As you can imagine the time was considerably shorter than in 1710 and not nearly as physically taxing.  Water for rinsing and storage for cooling were modernized.  A diverse array of family and friends gathered to enjoy the meal and this Fine Dessert.  And the bowl left in the kitchen...


Emily Jenkins with the sure knowledge of a storyteller supplies listeners and readers with a guide, like an extended hand beckoning us to follow, for each of the four scenarios.  We are eager to meet the new families.  We want to know how they get the berries, cream and water.

It's interesting to see the time expended and tool used to whip the cream.   For each of the family members whipping the cream, three separate phases are delineated. Word choices vary depicting a sound.  Within three hundred years, once the Blackberry Fool is made, the means for keeping it cool are similar but much more convenient as the years pass.

What makes each of these stories more intimate is the repetition of certain acts and phrases.  The parent asking the child if they want to lick the spoon or spatula, the use of different colored dishes for serving, the

after family members eat the dessert and the final bowl licking in the kitchen or hidden from view in the cupboard.  We find ourselves looking for the changes and ties across time.


The cream color on the dust jacket, used as a backdrop for all the illustrations throughout the book, speaks to us of a shared history.  Sophie Blackall frames the first daughter with the brambles from a blackberry bush, her home in the background.  On the left of the opened jacket, the back, beginning with 1710 each child is holding a bowl of the Blackberry Fool as they walk toward the right above the appropriate dates also framed in the leaves with berries.

Beneath the dust jacket, the book case is a striking array of blackberry branches filled with leaves and ripening or ripened berries.  Small white butterflies flutter among the vines.  For the endpapers Blackall

like paint.  The title page is a swirl of leaves and berries with five circles framed to showcase the title and each of the dates with the homes.

Like Emily Jenkins with her words Sophie Blackall has formed a lovely layout depicting the expected shifts but also featuring the timeless quality of making this dessert between the generations.  Using Chinese ink, watercolor, and the blackberry juice she varies her images in size from two pages, to smaller pictures on a single page, to three images on one page showing the passage of time, to four small vignettes encased in delicate blackberry vines done in two colors, to a single page and finally to a large visual crossing the gutter to form a column for text on the opposite page.  Her fine lines draw attention to all the detail given to each home, the clothing worn by the families, and the furniture and decor in each dwelling.

The facial expressions, body movements and actions of the family members endear us to each of them.  We smile knowingly at the son giving a scrap of food to a nearby cat at the table, we join in the cheerful conversation of a mother and daughter picking berries, we can't help but giggle at the baby tugging on his sister's skirt and gaze longingly at the gathering beneath glowing jars hung in a garden as a child chases a firefly.   The matte-finished paper adds to the sensory texture of Blackall's pictures.

One of my favorite scenes is of the mother in 1910.  She is first shown reading a recipe book with the bowl and beaters in front of her on the table.  She is next using the beaters to whip the cream intent on her task.  In the final element in this image she is holding the bowl of whipped cream with the beater standing up in the bowl.  I love the expression on her face!  She's looking off the page.  You don't know if someone else has got her attention or if she is looking to see if she can sneak a taste of the cream unnoticed.


Every aspect of A Fine Dessert:  Four Centuries, Four Families, One Delicious Treat written by Emily Jenkins with illustrations by Sophie Blackall is scrumptious.  The dust jacket, book case, endpapers, interior illustrations and fascinating narrative will captivate and charm readers of all ages.  It's a delectable blend of history, family and food.  This title will be placed on my 2016 Mock Caldecott list.  Both Emily Jenkins and Sophie Blackall include wonderful notes at the book's end.

I am about to clean my purchased blackberries with water running from my kitchen sink.  I will strain the berries with a spoon in a small-holed colander.  Whipping the cream with my electric mixer, I will gradually add in the sugar and probably double the amount of vanilla listed in the recipe at the back of the book.  There is no doubt in my mind I will be spooning this treat directly from the mixing bowl into my waiting mouth. Yum...yum...