In fifty-six days the spring equinox will arrive in northern Michigan.  On most days slower walks and careful eyes will reward you with signs of life in the snow, deer and rabbit tracks, and zig-zag lines just under the top of a small animal moving from one place to another.  By holding branches on shrubs and trees, tiny buds are seen waiting for a chance to alter their appearance.  On milder nights a whiff of skunk in the air reminds you to be wary.  The end of the long pause is getting closer. 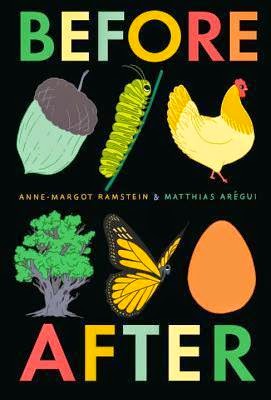 The shift of winter to spring, spring to summer, summer to fall and fall back to winter year after year are a promise of what will come.  Expectations are measured by what we know.  French artists Anne-Margot Ramstein and Matthias Aregui have designed and published a unique look at change in their title Before After (Candlewick, October 14, 2014).


Without a single word we wander through the pages and wonder about the differences time brings to animate and inanimate things.  The first two pages show us, left to right, a moon surrounded by stars and a constellation in a black sky followed by a pale sky blue with a fiery sun in the center.  A bud on a green stem reveals a daisy in full bloom.  These concepts are easy to understand.

The birth of a jungle near a towering mountain and the building of a city across an empty skyline have a common element in the next two images.  Can you guess what it might be?  A caterpillar consumes a leaf but a page turn has the same caterpillar in a new spot flying away as a butterfly.  Two separate shifts sharing something in common.

A single word, rocket, depending on the definition, can have dissimilar results.  Our mind is taken from items needed to bake a cake, to the origin of the item, to the presentation, representation, of this point of origin and back to a single slice left of the cake.  A series of pages take us through the seasons in obvious and unusual approaches.

The passage of time, the introduction of heat, and the effects of weather are depicted with normalcy and drama; fishing through the ice and fishing from a boat and a ship caught in a storm ending up beneath the waves on the bottom of the sea.  Sheep wandering among the hills produce yarn but hands holding needles knit a hat made from yarn.  A scene in a wintry forest with an axe stuck in wood becomes a crackling blaze inside a fireplace.

Exploration of thought processes goes from octopus to a volcanic mountain island in twelve pages.  Vision is given to building something and how it is broken.  A more essential form of light is lost but inventions change how light is delivered in homes.

Like the caterpillar, a chameleon is shown with instinctive skills but also as an agent causing loss of life.  Pages representing a well-known fairy tale rely on the familiar.  Eight illustrations on twelve pages close the book much as our day closes taking us back to the beginning.


The variety of viewpoints conceived by Anne-Margot Ramstein and Matthias Aregui cover a wide range but a connective thread runs through all the pages.  Their presentation of what we know is stretched asking us to look deeper.  Their visual interpretation of time is classic but refreshing in the combinations.

The book case when opened asks us to take the usual and flip it around.  On the back the acorn, caterpillar and chicken are beneath the tree, butterfly and egg. The endpapers are also opposite; the opening pages, left to right, are black and white.  At the end we see white, then black.  To the left of the title page, the verso holds a picture of an hourglass nearly full.  On the final page it is empty; all the sand rests on the bottom.

Rendered digitally all the pictures captivate readers with a design which moves our eyes from left to right in an easy flow.  Ramstein and Aregui, for the most part, use single pages to contain their images but nineteen visuals span two pages for more impact asking us to stop before the next illustration. A full color palette on heavy matte-finished paper invites repeated readings.

Several of my favorite illustrative combinations are the chimney for the fireplace on the following page showing smoke coming out during a snow storm with a stork safely nesting on the top in the spring.  The humor of the duo comes through in the four pages where we view an egg, a chicken, then a chicken and an egg.  The woodland scene near a pond during daylight and then at night is lovely; a prelude to the end of a day and the end of the book.


Before After created by artists Anne-Margot Ramstein and Matthias Aregui is a fascinating look at the minutes, hours, days, week, months and years of our lives portrayed by inviting us to alter our perceptions.  The possibilities for use in the classroom are only limited by your imagination; discussions and opportunities for creativity.  As I read this over and over I kept thinking about how these two planned out the pages; what lead them to go from one concept to the next.  You could pair this title with Tomorrow's Alphabet written by George Shannon with illustrations by Donald Crews.

The websites for Anne-Margot Ramstein and Matthias Aregui can be accessed by following the links embedded in their names.  They appear in French but can be translated.  At Matthias Aregui's site there are fifteen double page spreads from the interior of the book.
Posted by Xena's Mom at 4:07 PM