When you are the oldest child in the family, blame for seemingly everything lands squarely on your shoulders.  It's obvious you can't point the finger at a younger sibling when the mishap in question involves writing or reading and they can't do either yet.  (In one of my not-the-sharpest-tack-in-the-box moments, I tried this very thing.) When it comes to the disappearance of all the chocolate chips from the package it's an entirely different story.  Anyone can accomplish this feat, even if they are too short to reach the cupboard. 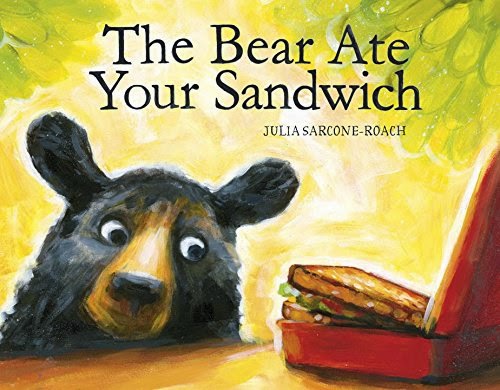 As I have mentioned before if it gets to the point when no one is willing to take responsibility, the "ghost" is blamed. The Bear Ate Your Sandwich (Alfred A. Knopf, an imprint of Random House Children's Books, January 6, 2015) written and illustrated by Julia Sarcone-Roach is about a bear's apparent quest for an irresistible meal.  Anyone who has watched Yogi Bear running, jumping and swinging his way around Jellystone Park knows bears simply can't help themselves when it comes to lunch boxes and picnic baskets.  Right?

By now I think you know what happened to your sandwich.  But you may not know how it happened.  So let me tell you

This unseen narrator confidently relates how a bear gets a whiff of something delicious as he steps outside his den.  A bed of a pickup truck is loaded with boxes of plump berries.  He climbs inside, eats every last one and dozes off to sleep full and happy.

When he awakens the sounds of the forest have been replaced with a distinctive grumbling vibration.  Trees are no longer visible but tall rock-like structures appear on all sides.  When the grumbling vibration is silenced, he sets off to explore this amazing place.

It is definitely different but he is blissfully replicating some of his same activities.  The smells are out of this world, leading him to another open place filled with fun.  This is when, according to the narrator, the bear notices the sandwich, unattended.  It's like it is asking him to eat it; which he does without a second thought.

As the last bite is being swallowed, he hears unmistakable sounds of witnesses to his deed.  He skedaddles as fast as he can to the closest, tallest tree; searching and sighting his woodland home.  Another journey using another mode of transportation brings him back to the sights and sounds he knows so well.  But dear readers, as you may have guessed, this is not the end of the story.  There is more.  It might involve a piece of lettuce.


Like squirrels scampering along a trail of nuts, we readers follow the words written by Julia Sarcone-Roach.  Her nearly poetic descriptions of the bear, his ride in the back of the truck, his ventures in the city and the nearby park, his theft of the sandwich and subsequent return to his den are so meticulously conceived we are hard-pressed to contain our astonishment (and laughter) at the conclusion.  She surrounds us with the story rather than the truth.  Here is a sample passage.

He was being quickly swept
along like a leaf in a great river.
The forest disappeared in the
distance and high cliffs rose up
around him.


As I am awaiting the arrival of my book and currently working with an F & G, the illustrations rendered in acrylic paints and pencil by Julia Sarcone-Roach are rich and luminous beginning with the dust jacket.  From the front with the bear eyeing the sandwich with obvious interest, we move to the left with a shift in perspective.  Sarcone-Rich has zoomed in on the sandwich in the lunch box placing a shadow of the bear squarely in the center with the word

Eighteen squares on the opening and closing endpapers feature seventeen different kinds of sandwiches.  Initially we see them in all their uneaten glory; only to see mere crumbs at the end.  Revealing noses in the eighteenth place divulge the secret.  The pictorial story begins on the double-page picture for the title page; a bear is curled in his den framed by leaves.

A vivid color palette of golden yellows, spring and forest greens, turquoise, red, orange and rustic browns create sensory images.  Even though not all the illustrations span across the gutter edge to edge, our eyes flow easily from image to image even if they are single pages or smaller pictures grouped together.  From fluid brush strokes to tiny details Sarcone-Roach defines every single scene telling us more than the text states.

This forest had many great climbing spots.

we see Bear going up the side of a building, perched on the edge of a fire escape, moving paw over paw hanging upside down on a clothes line between buildings, climbing a roof and squeezing through the O opening in the word HOTEL on a sign.  His body positions, stretching by his den, in the city alleys, on the playground and when he sees the sandwich, will have you grinning not to mention his facial expressions.  Two of my favorite visuals are the panoramic view as the truck moves from the forest across the bridge into the city with bear sitting up in the back of the truck looking around and of him returning home, touching his paw to the water.  They are two varied viewpoints both having emotional impact.

The Bear Ate Your Sandwich written and illustrated by Julia Sarcone-Roach is a spirited blend of text and pictures.  The twist, the final reveal, will have readers and listeners gasping first, and then giggling.  I think it's time to start my Mock Caldecott list for 2016.

To learn more about Julia Sarcone-Roach, her artwork and her other titles please follow the link embedded in her name to access her website.  This link takes you to the publisher's website where you can get a peek at some of the interior pages.  If you want to see lots of behind the scenes and process images for this book head on over to author and blogger Julie Danielson's site Seven Impossible Things Before Breakfast.
Posted by Xena's Mom at 12:24 AM