When you are younger you can hardly wait to grow up believing adulthood to be far superior to childhood.  Once you reach a certain age, even if you embrace it with acceptance, you long for the days to slow down.  Time seems to go faster with each passing year. 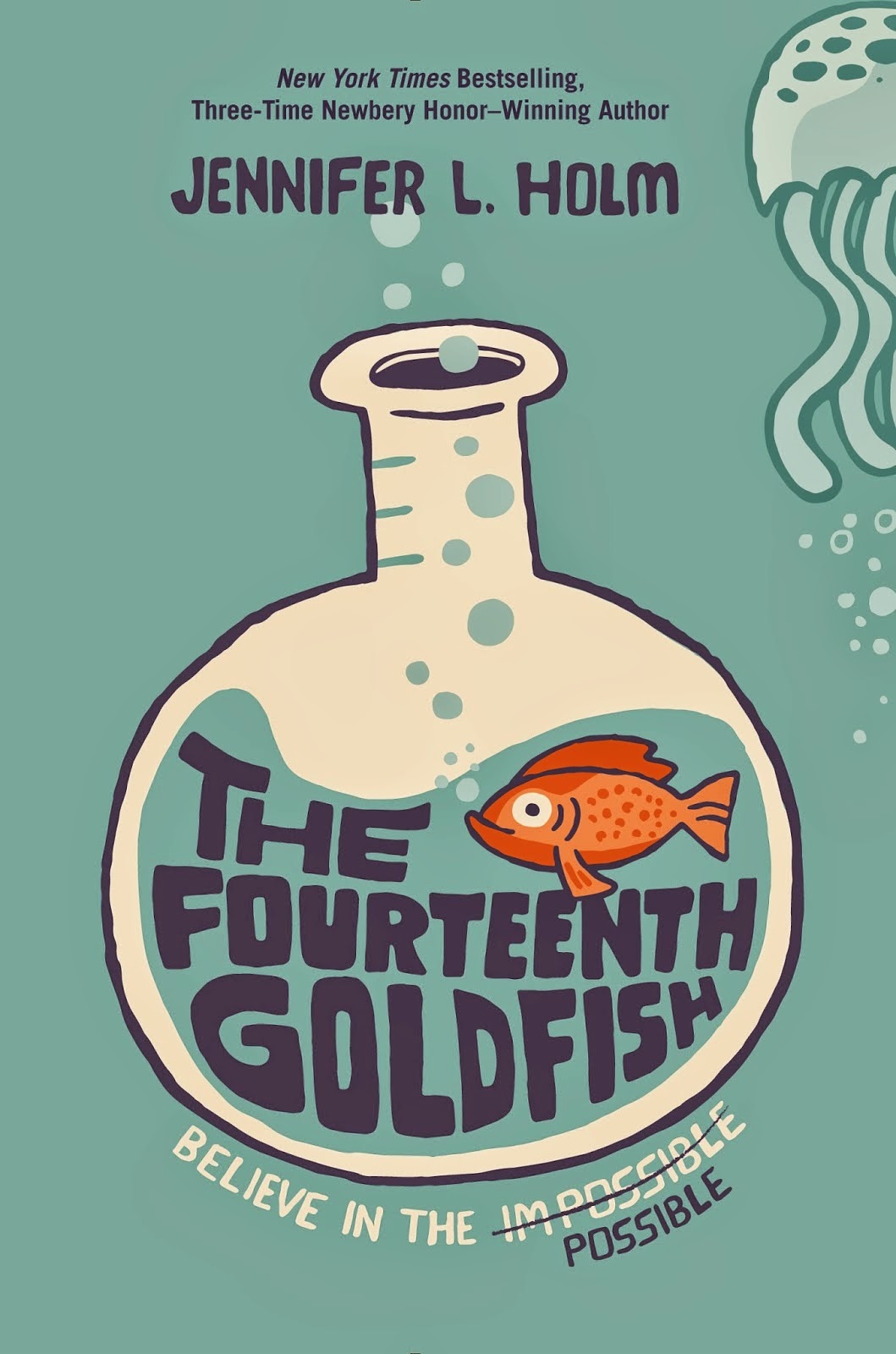 Wrinkles, gray hair, and creaky joints go with the territory.  It is decidedly hard though to see parents and peers age quicker for reasons other than their number of birthdays.  Jennifer L. Holm, triple Newbery Honor winner (Turtle in Paradise, 2011, Penny from Heaven, 2007 and Our Only May Amelia, 2000) explores family relationships, friendship, and why life, however long it is, is valued in a new title, The Fourteenth Goldfish (Random House).

When I was in preschool, I had a teacher named Starlily.  She wore rainbow tie-dyed dresses and was always bringing in cookies that were made with granola and flax and had no taste.

Ten-year-old Ellie is shocked to discover Goldie, her goldfish, is not a natural wonder having lived for seven straight years.  She was under the mistaken impression the original pet given to her by Starlily has been alive for quite some time.  Her mother, in an attempt to shield her from many untimely deaths, has been replacing each goldfish as they expired.  Number thirteen has recently left to swim in the big pond in the sky.

Now eleven and facing the uncertainty of sixth grade and middle school, Ellie is in for another colossal surprise.  Her maternal grandfather, Melvin Herbert Sagarsky, a renowned scientist, is going to be living with her and her mother, a drama teacher at the high school.  (Her parents divorced when Ellie was little but have remained good friends.  Her father, an actor, tours with a theater company.)  Certainly having a grandparent living under the same roof is an adjustment but this grandparent has made an epic discovery.  This grandparent is now a thirteen-year-old teenager.  Life is about to enter uncharted waters.

Without a doubt Ellie's grandfather has conceived a way to reverse the aging process by using a previously undocumented specie of jellyfish.  One of several problems is the sample is in his lab; his younger self is being denied access.  How is he going to document this scientific achievement without proof?

Now enrolled in the same middle school as Ellie, her distant cousin "Melvin" looks like an eccentrically-attired student but retains all the wry wit and feistiness of a seventy-six-year-old scientist providing for more than a few humorous moments. Through the other characters Ellie makes discoveries of her own; childhood friends drift apart and develop other interests but new friends make a path into your world, parents and their children, no matter their age, are still parents and children, and life needs to move forward.  Even knowing the outcome, on the second reading, I, like all readers, could not turn the pages fast enough, anxious for each quest to be fulfilled and for each question to be answered.  In this title, as in life, there are no endings, only beginnings of possible.


Having seen more decades then I can hardly believe come and go, losing both parents and a spouse, it's easy for me as a reader to identify with Ellie, her mother and her grandfather.  Jennifer L. Holm depicts them (and all the characters) with extraordinary realism.  Each voice, particularly Ellie's, rings true to life with clarity and humor.  Holm's gift in portraying the interplay of generational give-and-take is exquisite.

She skillfully weaves science, a realm full of potential, into this title.  Ellie's parents are hopeful she will find her passion, preferably in a pursuit similar to theirs.  With her teenage grandfather now taking up residence in their home, her joy for science is revealed layer by layer through their marvelous discussions.

Deft at descriptions of time and place Holm transports readers into Ellie's daily life.  Whether at school, home or on an escapade to gain the Turritopsis melvinus we are there side by side with the characters.  We know what they know.  We feel what they feel.  We grow in understanding as they do.

Here are some samples of Holm's writing from this title.  My pages are peppered with post-it notes.  Every time I read this I add more.

Warm air drifts through my bedroom window.  We live in the Bay Area, in the shadow of San Francisco, and late-September nights can be cool.  But it's hot tonight, like summer is refusing to leave.

Then he goes to the fridge, takes out the milk, and pours himself a big glass.  He drinks it and pours himself another.
He waves the carton of milk at me and burps.  "Make sure you take your calcium.  Everything they say about bone density is true.  I lost two inches in the last ten years of my life.
"You shrank?"
"The perils of old age," he says.

This is so interesting.  He's so interesting.  It's like I've never really listened to him before.  And maybe I haven't.  Usually when we're together, he and my mom just bicker.
"How do you know so much about this?" I ask.
"Because I've been researching it for the last forty years.  It's my side project.  I've had articles published, you know."
I'm starting to think that maybe I don't know him at all.  Not really.  It's like he's been playing the part of Grandfather in a play, but underneath the makeup is something more.  A real person.

But maybe there's also a little magic in cooking, taking all the plain old ingredients and turning them into comfort and memory.  Because when my mom walks in the door, she sniffs the air expectantly.
"Something smells wonderful," she says.
"We cooked dinner!" I say.
My grandfather holds out a plate to her.
"Is that----" she starts to ask.
My grandfather finishes her sentence, "Your mother's coq au vin."
She takes a bite and her face turns up in a smile.
"It tastes exactly the way I remember it," she murmurs.
His eyes shine, "Yes," he says.


The Fourteenth Goldfish written by Jennifer L. Holm is a beautiful novel creating a bridge of understanding between the lives of parents and children, exploring profound questions about life and death and affirming the wonder to be gained in the field of science.  It's a middle grade must-read but every single age will find connections within its pages.  Heartwarming and uplifting, this is writing excellence.

For more information about Jennifer L. Holm and this title please visit her official website by following the link embedded in her name.  At the publisher's website several beginning chapters are posted for you to read. Teacher librarian John Schumacher featured the cover reveal at Watch. Connect. Read. a little less than a year ago. Educator Colby Sharp chats with Jennifer L. Holm at sharpread and Nerdy Book Club. (I don't believe in coincidences.  These posts were made on my father's birthday.)  Thank you for this book, Jennifer. Update:  After you've finished this book head over to Jennifer Holm's website where she reads the final chapter aloud.