Of Apples And The Art Of Compromise

Due to modern technology and transportation, many grocery stores carry apples every month of the year.  Regardless, there is something ultimately more satisfying about going to nearby orchards and getting the fruit right off the tree. It's somehow crispier, juicier, sweeter or tarter.  Still warm from the making, apple doughnuts are a culinary treat bordering on the divine. It's one of the many perks of autumn in northern Michigan. 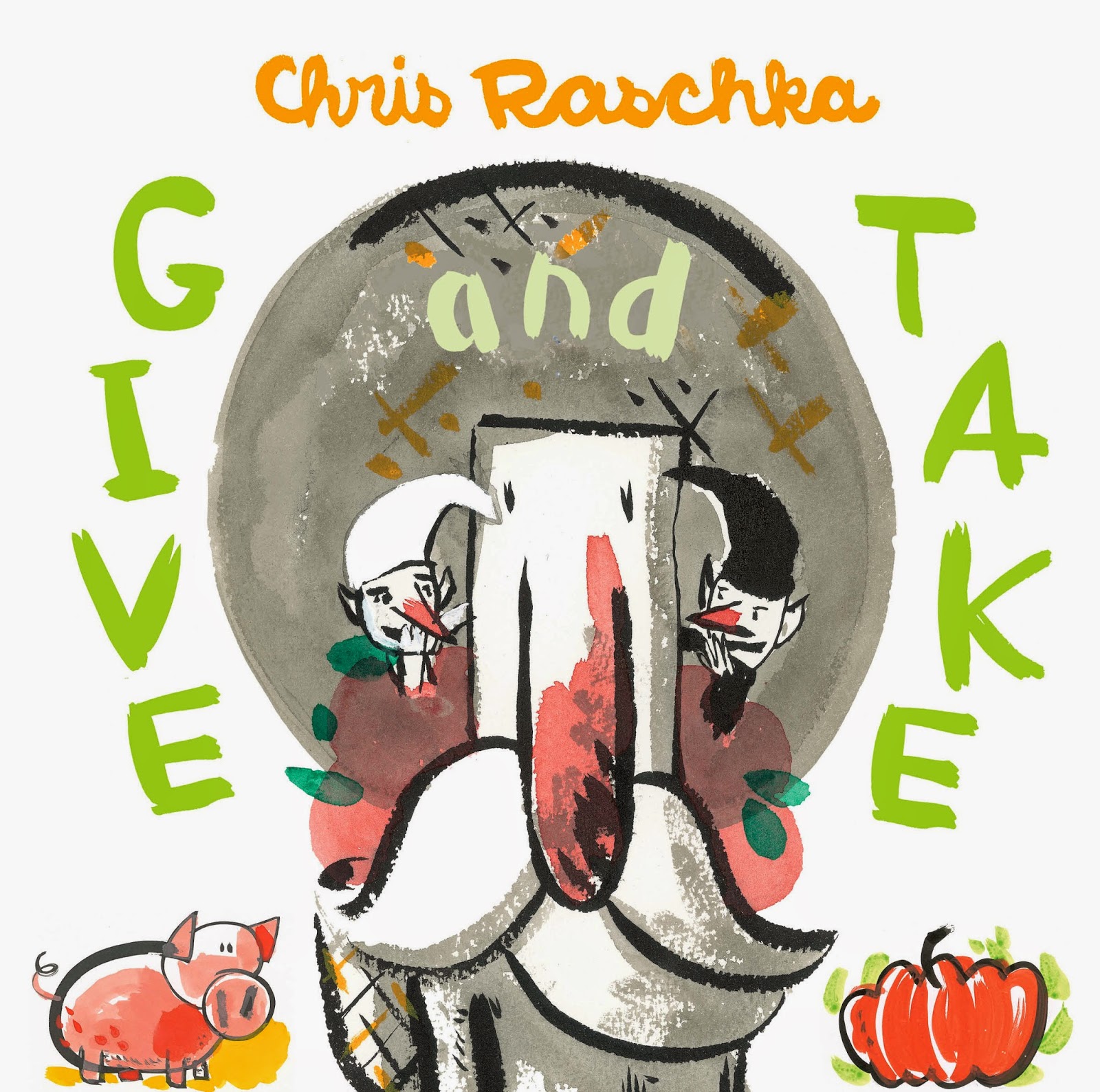 Old deserted homesteads, vacant fields, conservancy parks and small farms are dotted with at least one, if not more, apple trees.  You can't drive the country roads without seeing them.  In author illustrator Chris Raschka's new title, Give and Take (A Richard Jackson Book, Atheneum Books For Young Readers), a farmer and his dog discover more than apples on their daily walk.

Every morning a farmer said to his dog, "Let us inspect the apples."

Together they head toward the trees.  Noticing the apples are ripe for the picking, the man fills his basket to the brim.  Imagine his surprise when a wee little guy calling himself Take pops out from the bushes.

He promises the farmer, who already believes his life to be perfectly fine, a finer life.  A stop at a neighboring farm has the farmer replacing his apples with pumpkins; many, many pumpkins.  He is also told to take a hike.  Finally arriving home exhausted, the pumpkins are used to make a concoction neither the farmer nor his dog like.  All he really wants is an apple.

The next morning the apple-loving farmer tells Take to take his leave.  Thankfully, our friendly fellow finds more apples to fill his basket.  A second time he is startled when a wee little guy calling himself Give leaps out of the tree.  With as much zeal as Take he assures the farmer, who already believes his life to be superbly sweet, a sweeter life.

Whispered advice later, the farmer, is again home with absolutely nothing.  Upon waking he tells Give to get out.  A third tree, the greenest, is visited on this day.  Now the farmer and his furry friend depart with a basket of apples, and...two argumentative wee little guys... and a plan.

Why he has the grumbling gents with him is genius.  Stopping at the mill on the way home yields encouragement freely given and taken in conversation.  A tantalizing twist ends the tale.

As surely as if he said Once upon a time, Chris Raschka leads readers into his story with the opening sentence, establishing a rhythm.  This storytelling beat continues with each encounter with the wee little guys; a promise, a response, another promise and an unsatisfactory result.  The three visited trees are the best of their kind.  It's even more fun when the outcomes all involve subjects beginning with the letter p.

Cheerful banter, humorous exclamations and skillful use of repetition keep the reader eagerly turning the pages at the proper pace.  You can almost hear the voices of each of the characters; their personalities evident by the descriptive interactions.  Here is a sample passage.

Just then a tiny little man dropped out of the branches.
"Muttering Mutsus!" said the farmer.
"Who are you?"
"I am Give," said the tiny man.  "If you will listen to me, your life will be sweet."

The bright white on the matching dust jacket and book case as well as interior pages provides the ideal background for Chris Raschka's black ink and watercolor illustrations.  Shades of pink, peach, red, green, gold and orange focus on individual elements in each picture.  Varying line widths contribute to impressive layout and design.

Raschka alters perspective from visual to visual, sometimes on a single page.  An illustration on the left might cross the gutter to the right drawing attention to another picture.  Everything, every single thing, the patterns on the farmer's clothing and basket, the facial expressions on all the characters, borders and no borders, the blend of text and images, flows flawlessly.

One of my favorite illustrations is toward the beginning when the farmer and his dog visit the first tree, seeing the ripe apples.  Our eyes follow his pointing finger enjoying the display of fruit moving to the other page.  There we see the farmer's hand reaching to pick an apple.  Even without the text a story is being told.

Reminiscent of a classic folktale, Give and Take written and illustrated by Chris Raschka is a charming story of finding middle ground; to do so might supply a fine and sweet conclusion.  Listeners will be eager to join in when phrases are repeated.  I think this would be a great book to use for reader's theater.  It's as fresh, fun and delicious as a newly picked apple.

Here is a link to a series of video interviews with Chris Raschka at Reading Rockets.  At TeachingBooks.net Chris Raschka pronounces his name and gives a short history of its origin.