It seems to me children come into this world ready to freely express themselves anytime, anywhere.  For some this continues for the rest of their lives.  For others it's simply not easy.  Trust me when I say, I have firsthand experience in feeling apprehension prior to public speaking whether it's answering a question in class or standing before a room full of my peers. 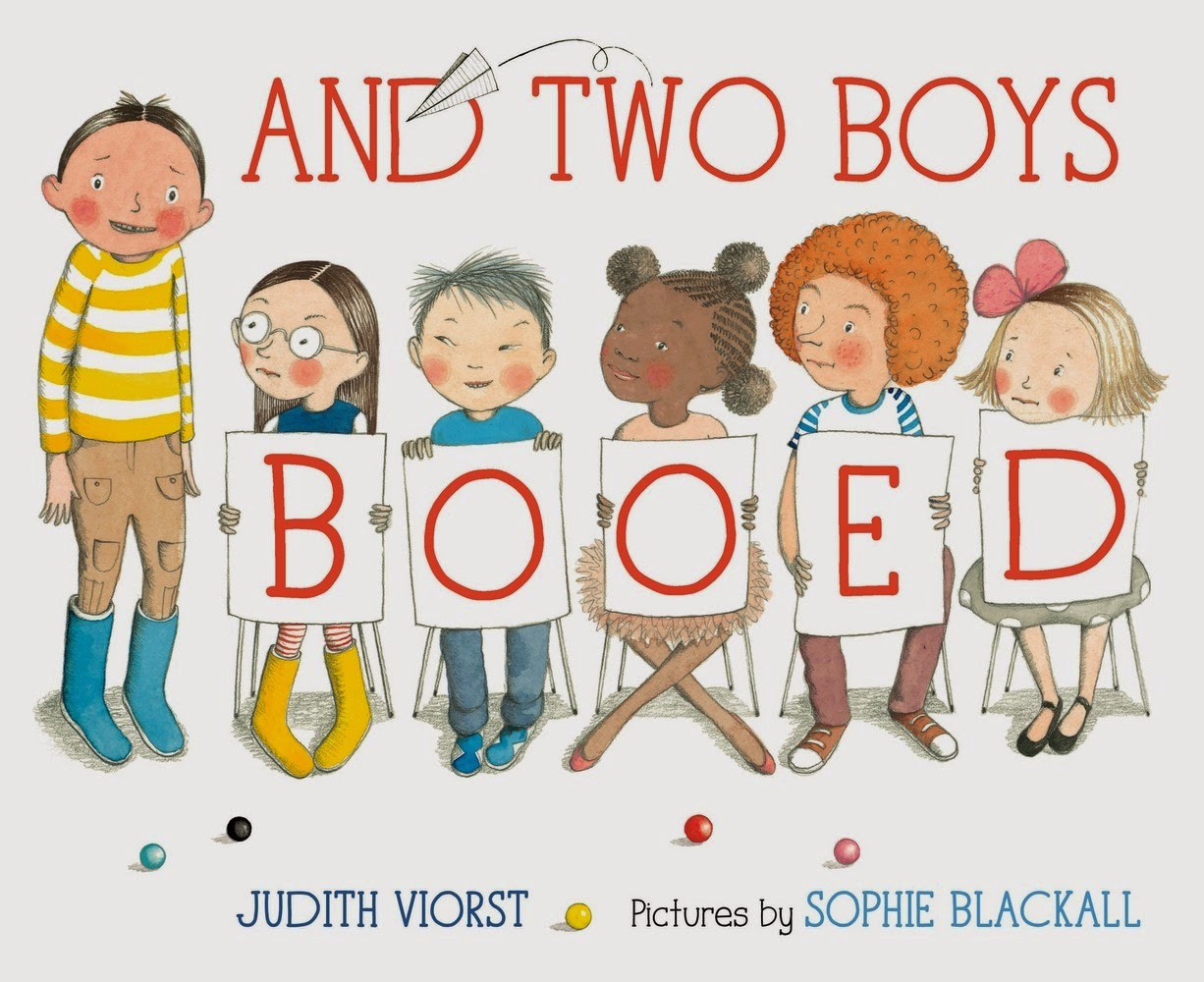 For this reason, my students and I have conversations about making everyone feel welcome to share; appropriate responses are discussed.  Each person truly has a remarkable, unique story to share.  Talent show jitters can be particularly troublesome especially when you know deep down inside, you are good.  Author Judith Viorst and illustrator Sophie Blackall have given readers an encouraging, amusing and oh-so-true look in And Two Boys Booed (Margaret Ferguson Books, Farrar Straus Giroux) at experiencing and overcoming stage fright.

On the morning of the talent show, I was ready to sing my song.

Why is this guy ready to sing his song?  Not only has he practiced over and over and over, but he is wearing his two favorite articles of clothing.  He's feeling even better when he realizes, seated and waiting, there are five students ahead of him in line.

As each of his classmates performs, shortening the time before he sings, his sense of "this is a piece of cake" turns to "why did I ever agree to do this".  When his turn arrives he stands up, then sits down and repeats this again.  Apparently this is not okay to two boys in his classroom.  They do the unacceptable; they boo.

His thinking gets muddled; words are switching places with other words in his mind.  His frustration grows.  But...all is not lost for this young soloist.  Practicing, blue boots and pants with pockets save the day; his classmates have a hand in it too!

What readers and listeners will like about this book is the cumulative format used by Judith Viorst with the narrative.  Each of the boy's new thoughts is added on to the previous one with the slightest alterations.  It's a wonderful technique for building anticipation.  In this case it creates the ideal canvas for his mishmash of thoughts as his doubt increases.

Through her illustrations Sophie Blackall is able to cast her special artistic light on the essence of a story and also broaden the reader's view.  She takes a single scene elevating our awareness with her whimsical but realistic details.  As an example look at the dust jacket/book case.  The main character is off to the left with the five students who performed before him sitting in the chairs glancing in his direction.  Juggling balls and paper airplanes are placed above and below them.  It's a stroke of design brilliance to have them holding cards spelling out the final word of the title.

To increase the pure fun of reading this book she has placed ten flaps within her pictures; readers gaining further insight with every lift. We might see the boy with the covers over his head and then smiling beneath them when they are pulled back or the teacher clapping.  The shape of the final flap is HEARTwarming.

Blackall shifts her visual size to emphasize a particular point in the story.  When the text speaks about the number of times the boy practices, twenty-five small pictures spread across two pages show all the boy is doing at the same time he is singing.  She has readers turn the book to see her vertical illustration zooming in on the pants and boots.  When the boy is shown waiting with the five others they are spread apart to depict his initial ease.  As it gets closer to his turn his stripped sweater acts as a turtle's shell.  I particularly enjoyed watching what the girl did with her poem.  Blackall is a master of conveying the everyday; no element is too small to note.

The collaboration of Judith Viorst and Sophie Blackall in And Two Boys Booed is certain to dispel any fears, large or small, guys and gals might have when faced with standing before others.  It is brimming with understanding.  It builds a bridge between those with no fear and those who are not at ease.  It deserves a standing ovation.