Certainly since the dawn of time, elders have served as guides for those younger than they are.  As parents or siblings it's almost an instinctive sense of duty. While most recognize the educational importance of making one's own mistakes, there are some things which must be done with the utmost care given to a prescribed sense of order, a code of conduct. 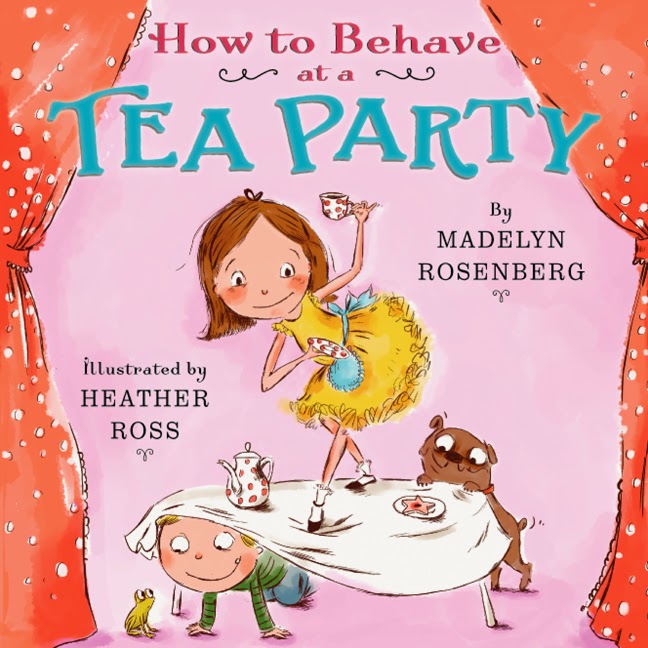 For whatever reason older sisters take this task to heart especially when it comes to younger brothers. It's a pleasure to present How to Behave at a Tea Party (Katherine Tegen Books, an imprint of HarperCollinsPublishers, September 9, 2014) written by Madelyn Rosenberg with illustrations by Heather Ross. Julia's little brother Charles has got a lot to learn; she's just the sister to show the way.

First, you open the invitation.

Overall grubbiness will not be tolerated; attention needs to be given to those places most likely to attract extra dirt.  Proper attire with emphasis on formal and fancy is required.  It would be unthinkable to attend without the quintessential hat.

Certain guests are not welcome at the suitably set table.  Oh...my...it seems those previously uninvited friends have arrived.  Er...it might be a good idea not to eat the flowers or for that matter the tablecloth.  At this point the demeanor of the hostess is deteriorating slightly.

Teacups must be held delicately.  Only certain food will be served with the exception of the dog being allowed his bone. The cornerstone magic words of manners are to be used at all times. Oh...oh...Julia is looking a tad bit more frazzled; her quiet mode of instruction has been replaced with frenzied pleas of can't, don't and no...no...no. YIKES!

Now that all the rascals, Charles, Rexie the dog, the frog and the irritable McKagan brothers, have retreated Julia can begin anew.  There are several teeny, tiny problems when following decreed tea party decorum.  It's too quiet.  It's too orderly.  It's up to the banished troublemakers to put a new spin on the best way to celebrate this time honored tradition.  Bring on the moat maker, the castle creator and daring, darling dragon!


Oh, how I love the way Madelyn Rosenberg uses words to convey the best part of any given situation. She paints pictures of personalities, transports us into best laid plans gone awry and supplies ample opportunities for us to grin, giggle and guffaw.  You can feel the tide turning and the tension building as prim and proper shifts back and forth between hilarious havoc.  Here is a single passage.

You must say "please"
and "thank you".
You must NOT slurp like a moose.
Or burp like Uncle Victor.


The title is telling readers one thing but the dust jacket/book case front illustration depicts an entirely different scenario.  Clearly this tea party is going to be anything but ordinary.  I can hardly contain my laughter when I look at it.  On the back is featured an interior picture on the pouring and drinking of tea.  Rendered digitally the visuals begin their interpretation of the story on the title page, verso and first page as Julia writes the invitation and delivers it to her brother Charles, innocently playing with his toys on the floor.

As Julia narrates Heather Ross shows readers exactly what is happening.  Charles is not cleaning his ears but Rexie's with a toothbrush and Rexie is cleaning Charles's nose with doggy kisses.  Initially Julia is blissfully unaware which sets the stage for one comedic situation after another.

The wide-eyed looks on all the characters (except the teddy bear who stares like a deer caught in the headlights), small upturned noses and mouths shaped in an array of emotions will have readers in stitches.  Younger readers, who notice the smallest details, will be totally captivated by the expressions and antics of the frog.

One of my favorite set of illustrations is for the text

Next you put on fancy clothes.  Wear a fancy hat.  Underwear does not count as a hat.

As Julia dons a hat and ruffled cape, Charlie and the frog head for the hills.  Rexie is smitten with wearing a pink tutu.  Julia does manage to snare Charlie placing a sailor cap on his head; prompting an outburst of laughter from the frog.  Purple, lace-edged underwear labeled Tuesday ends up draped over the frog's left side.


From the first time I read this book and each subsequent reading, I have had a smile on my face every single minute.  How to Behave at a Tea Party written by Madelyn Rosenberg with illustrations by Heather Ross is an adorable accounting of the misinterpretation of manners.  Sometimes a girl just has to go with the flow...or in this case...the frog. Be ready to hear a chorus of read it again.

For more information about Madelyn Rosenberg and Heather Ross follow the links embedded in their names to find their official websites. Here is a very special link to a blog post titled To Catch a Frog by Madelyn Rosenberg.  Today on Twitter people have been posting the cutest photographs of tea party attire and settings.  Here are only a few.  Follow the hashtag #howtobehaveatateaparty .


Our indy strikes again! Thanks @tnebeker RT: Sandy and I bond over a cup of tea: #howtobehaveatateaparty pic.twitter.com/kpcbNVsZtx
— Madelyn Rosenberg (@madrosenberg) September 9, 2014


It's release day for #howtobehaveatateaparty. How YOU would get ready? Hat? Monocle? Other? Show us! Details: http://t.co/rjkDtBhMF6
— Madelyn Rosenberg (@madrosenberg) September 9, 2014


Enjoy the book trailer.  I am about to savor my final cup of tea for the day.