If you look around wherever you are, shapes define the space.  Even before we know the name of shapes, our young minds recognize them.  We might group them together, favor one more than another or avoid some completely.

Shapes help us communicate by forming and stringing letters together to make written words.  Lines of shapes, notes, make music.  They convey certain meanings when we can't read; like the STOP sign.  In science, mathematics, architecture and art their significance is invaluable. 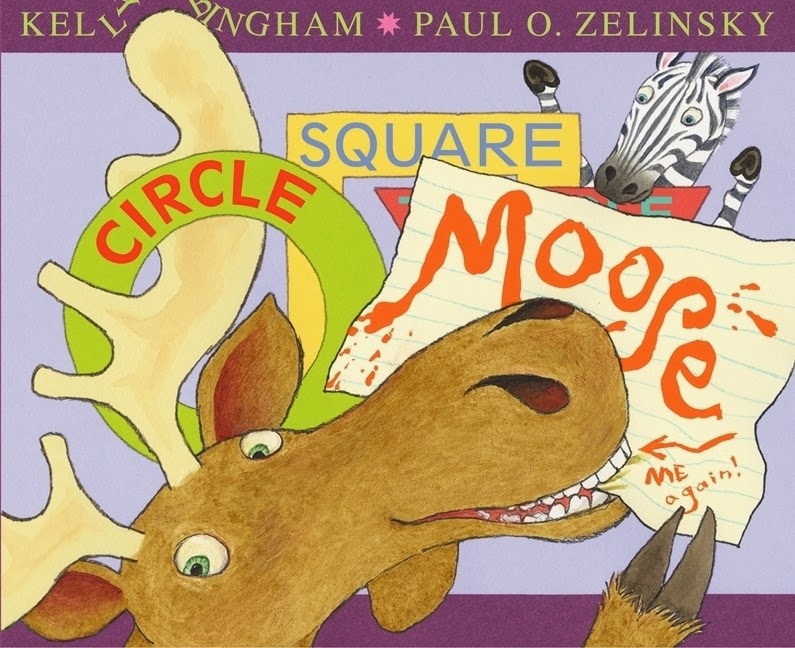 Given their importance I can think of no two I'd rather have introduce shapes to young readers than Moose and Zebra from Z is for Moose.  The comedic characters are back in Circle Square Moose (Greenwillow Books, an imprint of HarperCollinsPublishers) written by Kelly Bingham with illustrations by Paul O. Zelinsky.  A first-class rascal leads his play-by-the-rules friend on a riotous romp.

Shapes are all around us.  We see them every day.  Have you ever looked at a button?

Most of us can answer a resounding yes to this first question, recognizing a button as a circle.  When the narrator goes on to name a sandwich as a square, a big moose mouth is taking a huge bite from it.  Warned to quit eating the prop for the story and to vacate the book, Moose holds up what is left of the sandwich when the word triangle is mentioned.

Does Moose leave when asked?  Of course he doesn't.  He again holds up two cat ears to depict the triangle.  The narrator repeats this is not an animal book, but a shape book.  Moose and the cat need to skedaddle.

Thinking the book is back to normal, examples of rectangles are shown.  All is well until Moose appears in a window, crossing out words and replacing them with Moose.  The narrator is trying to politely get Moose to leave but he is being his usual mischief-maker self.  Somehow re-forming himself to appear in a kite, Moose creates more havoc when the shape diamond is explained.

With frustration clearly mounting, the narrator's plea for Moose to leave is interrupted by Zebra stating he will take care of this Moose problem.  Like Zebra's words were an invitation for a game of tag, Moose takes off cavorting through the pages.  When a mess created by a wayward ribbon threatens Zebra, Moose's ingenuity creates an escape and an ending with friendship in a starring role.


By the third page, the conversational presentation of a circle, then a square takes a definite turn toward hilarity with Moose's presence and the narrator's replies.  By moving forward with the initial premise, complete with rhyming text, it elevates the disruptions caused by Moose igniting outbursts of laughter in readers.  Kelly Bingham's verbal interplay between the narrator, Moose and Zebra is liberally laced with civility, indignation, playfulness, distress, surrender and confidence.  I really like when she has Zebra and Moose use the same phrase when offering assistance.  Here is a sample passage from the book.

A TRIANGLE is...
A wedge of cheese
A piece of pie
A sail
in
the
breeze

or ears like these! (Moose's words in a speech bubble over the final phrase.)


I couldn't help but smile when I removed the dust jacket from the book case.  Paul O. Zelinsky's decision to make the designs different adds to the humorous overall quality.  On the back of both Moose is pictured with a circle, rectangle, diamond, star, triangle and square.  On the front of the book case the title reads, My First Book Of Shapes.  Moose is inside the circle, square and triangle having crossed off the appropriate words painting over them in purple with the words Moose.

A lighter shade of the purple covers both the opening and closing endpapers.  In the upper left-hand corner of the first set of endpapers a corner is turned down showing the inside of a library with the characters reading.  Another turn of page shows eight squares featuring the shapes in hues of purple.  Moose is peeking out from one of them.  These also figure at the end of the book showcasing a final exchange between Zebra and Moose.

Full color illustrations rendered in mixed media illuminate the text in vivid frivolity.  The design techniques whether the pictures are on a single page or two are superior; your eyes carefully follow the interaction between the characters, seen and unseen.  When Zebra and Moose finally take their leave the shift in background color is brilliant, highlighting the final shape and the friendship between the two.

One of my favorite illustrations is the one for the passage referenced above.  Zelinsky's skill at portraying expression is highly evident in Moose's and the cat's eyes; one full of impishness, the other wide-eyed acceptance.  We are so close to the two of them only parts of their faces and bodies are shown.  It's a perfect perspective when placed next to the following picture of Moose walking away, shoulders slumped in defeat with the cat watching.


This companion title to Z is for Moose, Circle Square Moose, is another triumph for the collaborative team of Kelly Bingham and Paul O. Zelinsky.  It is a read aloud, fun-filled treasure.  You might want to have large shapes at the ready to use for props.  Expect a chorus of read it again.


For more information about both Kelly Bingham and Paul O. Zelinsky please follow the links embedded in their names to access their websites.  Paul O. Zelinsky did a remarkable thing in the final illustration for the text.  He includes his radio interview and a picture of Moose and Zebra in Alice Springs, Australia.  Here is a link to an interview and more artwork courtesy of Julie Danielson at Seven Impossible Things Before Breakfast.