Even the youngest children are familiar with place names but they usually are not knowledgeable enough to determine if what they know is a city, state, or country.  Some of my more memorable question and answer sessions during story time with kindergarten students have been when we attempt to identify places on a map or globe.    Given the speed in which we can become readily connected anywhere in the world and informed of events any time of day, working knowledge of people and places outside our immediate area is fairly important in becoming citizens of our planet. 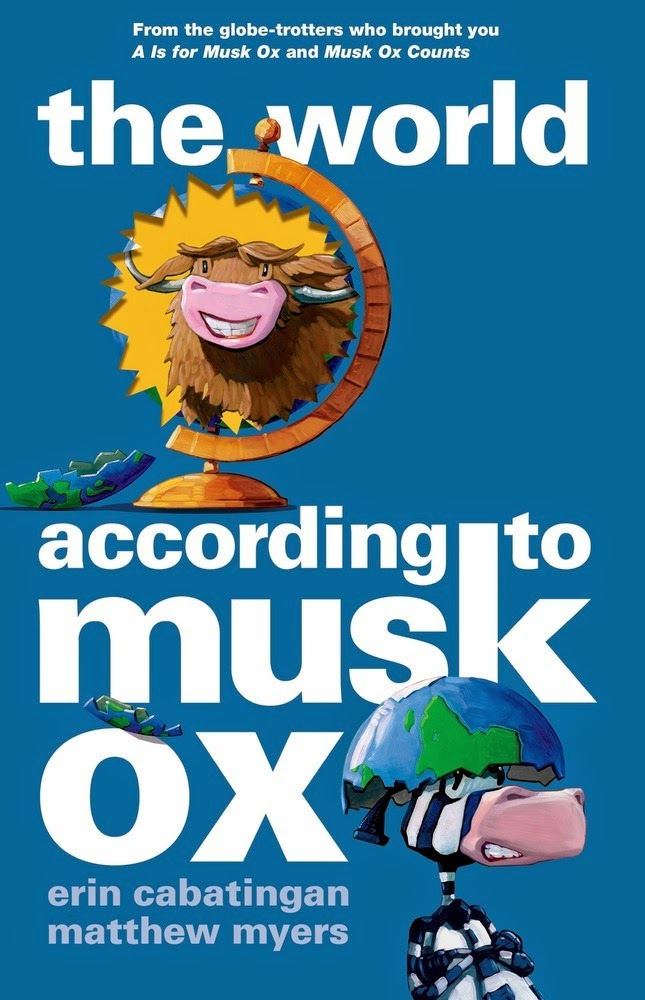 The duo who introduced readers to the alphabet in A Is For Musk Ox and numbers and counting in Musk Ox Counts are back in all their guffaw-inducing glory.  The World According To Musk Ox (A Neal Porter Book, Roaring Brook Press) written by Erin Cabatingan with illustrations by Matthew Myers follows the team on a trip to the seven continents.  Get ready for a little learning and loads of laughter.

The only portion of the globe still attached to the stand is the area known as the Arctic.  Mr. Mischief himself has broken off the other portion.  Why would anyone care about the rest of the world?  Musk oxen are the best thing on four legs and they, of course, live in the Arctic.

Zebra, quick to point out his preference for Africa, (it is his home) gets a typical response from Musk Ox.  He has never heard of this place.  Deciding it's about time Musk Ox broadens his horizons, Zebra announces in his no-is-not-an-option voice they are off for a visit.

Immediately Musk Ox is too toasty.  Pointing out it is the hottest continent; Zebra kindly gets him a huge block of ice to place on his head.  While they are enjoying several different regions, Musk Ox happens to notice two wildebeests, promptly falling in love.

Continuing their adventure to the coldest place, Antarctica is next on the agenda.  Wind nearly blows them off the surface.  And did you know Antarctica is the largest desert in the world?  Still more shocking news awaits Musk Ox; there are more continents.

Sticking with alphabetical order their next stop is Asia.  A trio of facts, the tallest, the longest and the biggest, are casually relayed by the stripped guide to his woolly companion before they head down to Australia.  Zebra calmly notes two particularly nasty creatures known for being the most venomous in the world.  That sound you just heard was Musk Ox screaming like a baby.

Europe, among other things, holds the title for having spectacular ice caves known as Eisriesenwelt.  The duo does need to leave rather speedily for North America after you-know-who boldly goes where he should not have gone.  Zebra hurriedly points out there is more to this continent than the Arctic.  After traveling to one of the largest tropical rain forests in the world found in South America, Musk Ox wants to make one more stop; to a country not a continent.  I'll bet you can't guess where or why.

How fortunate for readers everywhere, when nearly two years ago Erin Cabatingan brought Musk Ox and Zebra into the children's literature world.  As in the two previous titles, the entire narrative is a witty no-holds-barred conversational exchange between the pair. Despite their differing personality traits, Miss Manners could probably learn a thing or two from Zebra but run screaming from the antics and attitude of Musk Ox, their relationship seems to be evolving into one where they are more tolerant of one another even if they rarely find common ground.  Here is a partial passage from one of the pages.  It is one of many moments of subtle hilarity.

What, no smart remarks?
Well, you do sound like you swallowed a computer.  But I suppose there are lots of interesting things in the world.
Besides musk oxen?
Possibly.  But don't tell anyone I said that.

An addition to the narrative is a series of Hysterical Marker points on each continent.  There may be one or two.  These, while informative, are not without their own sense of fun.

How can you not laugh when you open the book case?  A grinning Musk Ox is poking his head through the broken globe via a cutout to the title page.  Barely suppressing his disgust, Zebra wears part of the globe like a hat.  On the left (back) Musk Ox declares, while lounging on his traveling trunk being carried on the back of Zebra:

If you want a really useful book about geography...
this isn't it.

The title page and verso on the left feature an illustration crossing the gutter of Zebra struggling to haul the same huge trunk with Musk Ox on top holding a fancy drink.  The contrast between the trunk and Zebra's small stripped suitcase is just the beginning of great details sure to bring on the grins.

In his paintings Matthew Myers never misses a beat, altering their size to fit the pacing of the storyline.  If Zebra and Musk Ox are having a transitional conversation, the background is usually a solid color.  If they are exploring a new place, Myers provides appropriate resplendent scenery with his comedic touches evident.  In the beginning Musk Ox is playing with toys, musk oxen, a Polar bear and a small road sign with arrows pointing in opposite directions, Minsk and Miami.  Zebra packed for their first stop is carrying his toothbrush in his tail.

If you look carefully at each illustration you can find many extras.  For each continent Zebra is wearing a different hat indicative of the area. Several times Zebra is providing the method of transportation for Musk Ox's trunk, a rolling snowball or a bicycle rickshaw, unless of course they are sliding down an icy slope or dropping over the edge of the Niagara Falls.

One of my favorite illustrations is the double-page spread devoted to their arrival in Europe.  At this point they are in Paris.  Zebra is unfolding a brochure of European sights labeled Hoofing It In Europe: A Walking Tour.  You can clearly see the label on his suitcase, Z. Bra.  The tape holding the globe together is visible.


The World According To Musk Ox written by Erin Cabatingan with illustrations by Matthew Myers is one of the funniest adventures across the seven continents readers will likely have encountered to date.  The banter between the companions provides all the entertainment you could want while learning just enough information to peak your interest.  Get out your globe and ready this aloud to an audience of one or many.

To discover more information about Erin Cabatingan and Matthew Myers please follow the links embedded in their names.  If you would like to see more visuals from this title, head over to the publisher's website.  Half of my favorite illustration can be seen.

This review/recommendation is based upon an Advance Reader's Edition which I received from my local independent book shop, McLean & Eakin Booksellers in Petoskey, Michigan.  This title is set to be released on September 30, 2014.
Posted by Xena's Mom at 1:04 AM