Who Needs A What?

Have you ever watched a little boy or girl walk along a sidewalk after a rain storm?  Inevitably there are puddles.  Even if these puddles are not along their particular route, they will make a detour, jumping in them with unrestrained glee.  If you take this same little boy or girl and mention the word bath, they will vanish like a puff of smoke.  What's the big deal?  After all, it's just water...right? 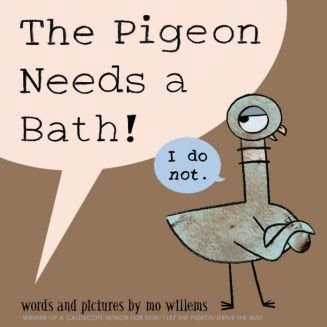 It's the same way with Xena.  She swims for hours in a lake, having to be caught to get her out.  As soon as the shower is turned on, she disappears or if she is in the bathroom, she cements herself to the floor.  Given these scenarios, it should go without saying our feathered friend who wants to drive a bus, wants to stay up late, wants a puppy, finds a hot dog and wonders why Duckling gets a cookie, would also be reluctant to be less dirty.  The Pigeon Needs a Bath! (Hyperion Books for Children, an imprint of Disney Book Group), words and pictures by Mo Willems, takes a hilarious look at one stubborn bird.

Hi! I don't know if you've noticed, but the Pigeon is filthy.  So, I could use your help, because:

The Pigeon Needs a Bath!

That is a matter of opinion.

The Pigeon truly thinks the bus driver (clad in a bathrobe, shower cap and bunny slippers, carrying a towel) is joking.  A little dirt never hurts anyone.  Scratching himself, the Pigeon is fairly certain he took a bath last month.  Why would he need one now?

He feels clean even if he looks dirty, really dirty.  He starts to get feisty, asking the reader if perhaps they might need a bath, until he receives a reply.  Oh, oh...smell...what smell?

Now the flies are starting to circle him.  When they leave with exclamations of

he finally gives in.  He'll do it, if for no other reason than to make the reader (and the bus driver) happy.

Standing next to the tub, he realizes this might not be such a good idea.  It takes him forever to get the water temperature, depth of the water and the proper amount of toys to his precise specifications.  With a big

In a flash his attitude changes.  You would think he might be part duck he loves it so much.  You will never guess what he says


At no time does Mo Willems miss a beat with the word choices in his books.  The give and take dialogue between the Pigeon and an unseen or unheard narrator, except for the bus driver in the beginning, is exactly what we've come to expect from this bird that knows his mind (or thinks he does).  His snappy replies, musings and emotional outbursts are awash with laughter. Here is a sample of two pages.

Y'know, in some places it is impolite to bathe.

Mo Willems starts his story on the book case.  The Pigeon is already talking to the reader.  On the back, grimy with a fly buzzing around him, he asks how someone could possibly take time for

when there are these other Pigeon books to read.

The opening endpapers show the Pigeon up to his neck in a mud puddle happily splashing.  On the closing endpapers his equally joyful self is engaged in a similar activity in the bath tub.  The title page, verso and dedication pages include portions of the narrative as well.

Shades of brown provide the background for the Pigeon, feather-deep in denial as to his state of cleanliness.  There is a single page for each phrase, with the perspective altering according to his mood.  Twenty-nine smaller images feature his ever-changing techniques to avoid actually getting into the water.  The colors used as he washes, purple, green, blue, rose, orange and yellow (including the ring around the tub) compliment and contrast with the earlier illustrations.

One of my favorite pictures is when the three flies are leaving him because of his strong obnoxious smell.  The look on his face of resignation makes me want to burst out laughing.  You can almost hear him sigh.

Fans of this character's previous books will laugh loud and long when reading The Pigeon Needs a Bath! written and illustrated by Mo Willems.  Even if there is only an audience of one (you), read this book aloud!  Better yet, find someone to read it to over and over.  It gets better every time.  I'm still smiling.

Please be sure to follow the links embedded in Mo Willems and the Pigeon's names to access their websites.  UPDATE On Twitter John Schumacher, teacher librarian and blogger at Watch. Connect. Read.,  mentioned the activity kit for this title. Enjoy the book trailers and interview below.