Friends Seeking One Another

Over the course of years you develop a respect for the writing style of authors and the artistic techniques of and mediums used by illustrators.  While you value the work of all, certain individual's creations will find a way into your reading soul. A virtual friend and colleague, JoEllen McCarthy wrote about heartprint books in a post at the Nerdy Book Club. 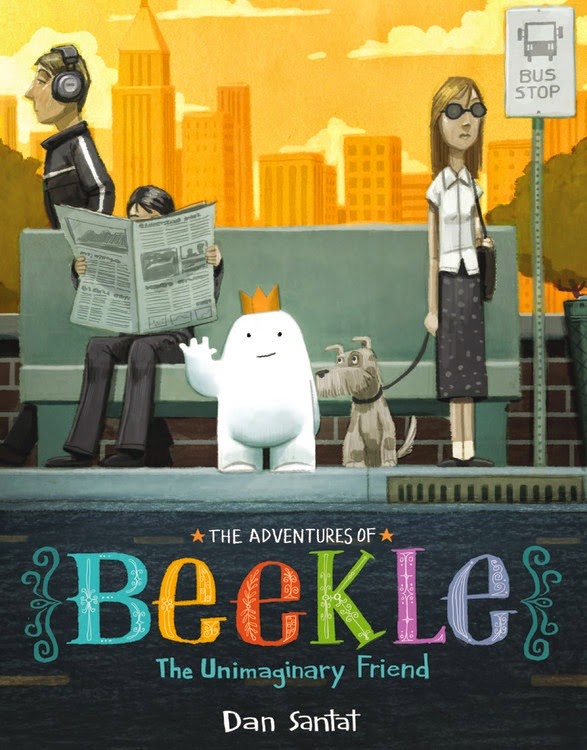 Nearly ten years ago author illustrator Dan Santat celebrated his first book's birthday; The Guild of Geniuses (Arthur A. Levine Books, an imprint of Scholastic, Inc.) was released in November of 2004.  In the intervening time I have watched him perfect his distinctive workmanship in writing and illustrating.  His visuals are brimming with a colorful vibrancy and his particular brand of humor.  His newest book, different from the others, which he both wrote and pictured, The Adventures of Beekle: The Unimaginary Friend (Little, Brown and Company) came out two days ago.  It's already left a huge print on my heart.  It's a love letter; perhaps to his eldest son for whom the book is dedicated or to all those seeking their most remembered friend.

He was born on an island far away where imaginary friends were created.

These beings residing on this island expectantly waited after their birth for a real child to imagine them into existence.  Each and every night he would look to the stars hoping to leave as others did.  He remained there night after night after night.

Thinking of all the activities and events keeping his friend too busy to think of him, he did what had never been done before.  He sailed from this extraordinary haven across uncharted seas seeking the only one for him.  To be sure, it was frightening but thoughts of his perfect pal kept him going.

Arriving at the real world, he found it to be a puzzling place.  It lacked what he was seeking until he caught a glimpse of hope in the form of another imaginary friend.  He trailed behind believing he was getting closer.  Where was his friend?

Do you remember climbing up a tree with branches perfectly placed to help you reach the top?  Do you remember finding something special when you surveyed the world below?  That's exactly what this imaginary friend did.  When sadness settled over him after no one came, a breeze blew in an astonishingly glorious answer.  One adventure ended as another began for... Beekle.


Spare text, at the most four sentences on any two pages, is expertly placed to provide a storyteller's cadence to the narrative.  Dan Santat has given meticulous attention to his word choices appealing to a child's heart. (But trust me when I say adults will be deeply moved too.) Like life he builds the tale to a point where goodness appears when needed most.  Here is a single set of sentences.


When speaking about the illustrations, I would first like to note the quality of the paper on the dust jacket, book case, and interior pages.  On the front of the dust jacket the title letters are raised as is Beekle.  The matte finish on the book case and thicker pages is the type of texture which prompts and promotes wondering in readers' minds.  This is what I call bookmanship; the true art of crafting a volume to treasure.

On the dust jacket we see Beekle in the real world among adults who are unaware of his presence.  The dog knows though.  On the back of the jacket he is walking through the crowded streets, his back to us, with a similar pooch glancing his way.  A spectacular, vibrant different book case is revealed beneath the jacket.  We see two views of Beekle as on the jacket; daylight in the city on the front, a starry night on the island on the back.  Opening and closing endpapers feature first eleven, then twelve children with their imaginary friends in black, gray and bright sky blue.

Except for four all of the visuals, rendered using pencil, crayon, watercolor, ink and Adobe Photoshop, by Santat span over two pages. (All the text is hand-lettered.) An array of hues is used in Beekle's world and that of the children.  The adults and the city are done in darker shades in a limited palette. You could look at all the individual elements large and small for hours. (I love the tape holding Beekle's crown together.)

One of my three favorite illustrations (I cannot pick only one.) is Beekle and the children climbing the tree filled with star-shaped leaves.  It was on the third reading I noticed one particular child as my eyes immediately drifted to Beekle toward the top.  When Alice shows the reader and Beekle her picture, each reader will find it hard not to sigh out loud.  The expression on her face is knowing and full of anticipation.  The following series of illustrations of her and Beekle becoming acquainted is simply precious.


The Adventures of Beekle: The Unimaginary Friend written and illustrated by Dan Santat is beautiful like any and all of your favorite things.  Read this to everyone.  I know, in my heart of hearts, you will be asked to share this story over and over.

Please follow the link embedded in Dan Santat's name to access his official website.  Here is a review of this title by Carter Higgins, teacher librarian, on her blog, Design of the Picture Book.  John Schumacher, teacher librarian, blogging at Watch. Connect. Read. devoted a post to Dan Santat  several years earlier. Find it here. UPDATE: Less than an hour after this review was posted, I discovered another at BookRiot which includes an interview. ANOTHER UPDATE: Dan Santat wrote a wonderful article about the inspiration for this book on his Tumblr April 29, 2014.  Enjoy the trailers below.  I've also included collected tweets about the book which began to generate buzz more than a month ago. THIRD UPDATE: Julie Danielson at Seven Impossible Things Before Breakfast interviewed Dan Santat on May 27, 2014. YET ANOTHER UPDATE: Dan Santat is interviewed at Pen & Oink on the making of Beekle.
UPDATE:  This update came March 5, 2015 after Beekle won the prestigious Caldecott award.  This post is filled with wonderful links.  The Beekle Experience
UPDATE:  This update came July 20, 2015.  It is an interview and discussion at Bookie Woogie.  You need to read the replies of the children.
UPDATE:  November 21, 2015 new Fun Activity Kit.


@hendrixart Yeah. It's definitely a different kind of book than what I'm normally known for, too. It's a quiet book #unSantat
— Dan Santat (@dsantat) March 5, 2014