A Rumbling Wet Is Rolling In

Rain is a force and a source.  Enough rain can alter a landscape moving earth, rocks, plants and trees in a huge display of strength.  Hearing rain fall on a pond, a window or a metal roof is a soothing sound of serenity. 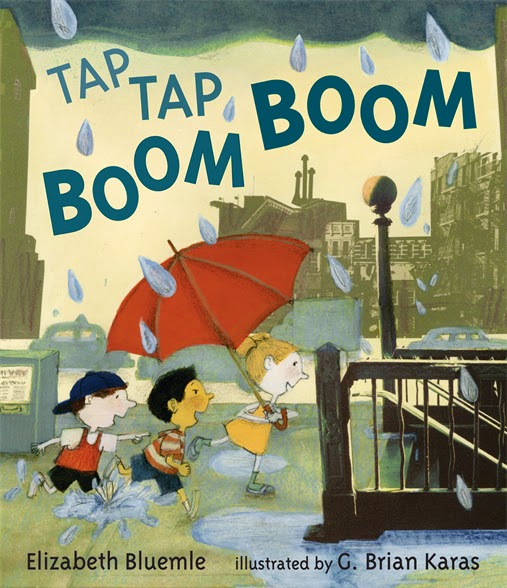 Grumbling thunder signals the impending storm as large raindrops slowly begin falling.  Umbrellas begin to appear and open, protecting the bearers from a certain soaking.  As the breeze boldly grows, people scurry and hurry heading toward the subway.

Men, women, boys, girls and canine companions step lively down the stairs.  Pleased at finding sanctuary from the wild weather, the gathered group begins to enjoy this temporary pause in the busy business of their daily lives.  The hum of conversation and laughter in this happy haven shield them from the noise outside.

A gift is gladly given without a word.  One plus one equals best buddies through drizzle and deluge.  When the sounds fade, people parade toward the top.  A surprise waits.  Found friends may meet again.

These deliberately selected words of Elizabeth Bluemle sing when read silently but said aloud they're like the beat of a brass band.  Her created cadence mimics the storm's progression; as it gets stronger so does the camaraderie of the people.  The use of rhyme and placement of phrases generate a friendly, flawless flow. Here is another sample from this poetic narrative.

A fascinating mix of materials, collages of photographs, gouache, and pencil, set the illustrations of G. Brian Karas apart in this title.  The large raindrops falling on the front dust jacket and book case, as three laughing children run toward the subway stairs, are a featured focus throughout the book.  On the verso and final page a giant raindrop contains an entire city scene.

Each time TAP TAP BOOM BOOM appears on a page the layout is a reflection of the sound made by the words.  Nearly all of the pictures span across two pages drawing the reader into the story with shifting perspectives.  Close inspection of the two single page illustrations find them opposite a lighter shade of the blue used in the endpapers, faint lines identical to the tile walls lining the subway stairs can be seen.  These visuals are opposite the text depicting the people first entering the shelter, and then leaving after the storm.

I have enjoyed reading and looking at the illustrations in this title over and over but one of my favorite combinations is near the end.  Karas pictures several characters continuing their day after the storm sharing good-bye greetings.  A big puddle mirrors a city building and the changing sky.  This visual, like all the others, exudes a cheerful comfortable warmth.

Perfect for sharing on a stormy day or during a sudden cloudburst, TAP TAP BOOM BOOM written by Elizabeth Bluemle with illustrations by G. Brian Karas will quickly become a crowd favorite in any weather.  This is a welcome collaboration which I sincerely hope is repeated in the future.  Make sure you read this aloud frequently, invite your listeners to participate or perhaps perform it as a reader's theater.

Please follow the links embedded in the author's and illustrator's names to access their official websites, learning more about them and their work.  This is a link to an older interview of G. Brian Karas at Julie Danielson's blog, Seven Impossible Things Before Breakfast. This link is to G. Brian Karas's blog containing a post about this book.