Plan R For Read This You Must

No matter how much care is given to the implementation of an idea, it sometimes does not work.  If another party is involved (your nemesis), it can be baffling as to how they seem to know exactly what your intentions are almost before you do.  They are indeed very clever or you may have discovered your soul mate; even if you are a child and they are an adult. 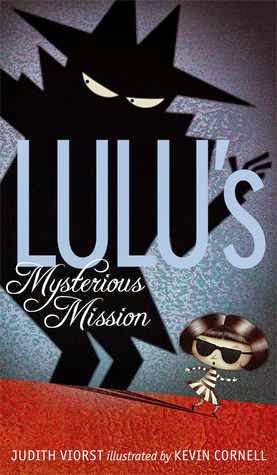 If you have read Lulu and the Brontosaurus or Lulu Walks the Dogs, you are familiar with this tenacious troublemaker whose mind never rests; continuously plotting to get her own way...always.  Lulu's Mysterious Mission (Atheneum Books for Young Readers) written by Judith Viorst with illustrations by Kevin Cornell, dust jacket illustration by Lane Smith, finds this manipulative maven facing her biggest challenge yet.  It seems Lulu's parents are about to do the unthinkable; take a trip without her.

But first let's go find Lulu, who is in the living room screeching "No! No! No!" although she doesn't screech much anymore. However, the news she was hearing from her mom and dad was so utterly, totally SHOCKING that it not only started her screeching but almost shocked her into throwing one of her heel-kicking, arm-waving, on-the-floor tantrums.

Lulu is not about to take this news without a fight.  She fails to understand how her parents can enjoy themselves without her.  She wonders what kind of person could possibly take good care of her; said person might have ulterior motives like kidnapping her for ransom or starving and hitting her or locking her in the basement (the fact that their home has no basement is irrelevant).

Her parents assure her they've

her.  Well, when Lulu hears the word babysitter that starts a whole new tirade.  Filled with fury she stomps up the stairs to her room when informed Ms. Sonia Sofia Solinsky will be arriving shortly as her parents are leaving the next day.  What? Tomorrow?  It gets worse and worse as far as Lulu is concerned.

Fuming she starts to hatch a plan which is executed quicker than anticipated when Ms. Sonia Sofia Solinsky loudly announces her presence, boldly walking into Lulu's bedroom despite her proclamation of being extremely ill.  Now if you are under the belief this caretaker of children is some sweet little old lady, think again.  Dressed in a military style uniform with a canteen and binoculars hanging from her belt, hair pulled back in a severe bun, combat boots on her feet, with a single glance anyone can tell she means business.  As soon as Lulu's parents are out of earshot, she tells her precisely how things are going to play out over the next week.

The next day when her parents have left, Lulu realizing plan A was an utter failure, decides it's time for plan B.   That strategy is a bust.  Plan C flops miserably.  When plan D appears to be working splendidly, Lulu gets stopped mid-argument by a single word from Ms. Sonia Sofia Solinsky.  It's time to call a truce and bargain with her archenemy.

Attached to that single word are other word groups, Repair and Restore, Disguise and Penetrate, Hacking and Codes and...those two words for which you've been patiently waiting...Mysterious Mission.  The days fly by as Lulu puts forth her best efforts (and believe me, knowing Lulu, it's not easy) to comply with the instructions of Triple S before her parents return.  Her mom and dad are absolutely bewildered when she insists they take more trips without her in the future, requesting that Ms. Sonia Sofia Solinsky stay with her. As readers you won't be the least bit surprised because Lulu gets her way...always.

Judith Viorst, as in the two previous titles, begins with a two page introduction of sorts, advising us of her unintentional deceit with the title.

STOP! Don't begin the first chapter just yet. There's something I need to tell you.  And I think I'd better tell it to you right now.

This one-on-one conversation, in a no-nonsense-let's-be-perfectly-clear tone of voice, with the reader continues throughout the story.  It's like we are getting extra information, the inside scoop, from the one person who knows everything.

You couldn't ask for characters, Lulu's mom and dad, Ms. Sonia Sofia Solinsky and Harry Potter, Lulu's trombone instructor, who play their parts any better.  Ms. Solinsky would have any other boy or girl raising a white flag after the first round but not Lulu. When a fictional character is over-the-top outrageous in their words and deeds, you can't help but laugh.  This is the Lulu, created by Viorst, whose escapades we have come to admire.

Known for not going with the flow, she still keeps us guessing as to her next plan of action.  Lulu's eeny meeny miney mo chant whispered under her breath, with a verse added after each loss and, in a twist of fate, success, definitely heightens the hilarity.  When she and Ms. Sonia Sofia Solinsky plot and converse, readers will keep those pages turning as fast as they can.  Here is a single sample.

... But before she could finish another "That babysitter's got to go," a loud "ahem!" disturbed her happy mood.
Standing at strict attention at the bottom of the tree---and what, in heaven's name, was she doing out there?---was none other than Ms. Sonia Sofia Solinsky.
"What, in heaven's name, are you doing out here?" Lulu fake-sweetly asked her. "I was just getting ready to meet you by the front door."
"I very much doubt that," said Ms. Solinsky, scowling down at Lulu and shaking a stern finger in her face. "But I'm warning you, don't bother trying that climb-out-the window-and-down-the-tree-nonsense again.  Believe me, I know tricks that you've never dreamed of.  Besides which, you were already wearing your sneakers."

For this third title in the series Kevin Cornell's illustrations rendered in graphite and watercolor on paper and then digitally manipulated add an extra spark to the text.  He leaves no doubt as to the many moods of each character, especially Lulu.  Smaller insets, full page and larger illustrations crossing the gutter fit the flow of the narrative seamlessly.

Two of my favorites are Ms. Sonia Sofia Solinsky holding the back of Lulu's skirt so she can't fake faint when her parents are leaving.  We see a highly distraught Lulu, the long legs, combat boots and arm of Ms. Sonia Solinsky with the paler outlines of the living room in the background.  When Lulu is sure plan D is proceeding toward victory, we see the text of her chant in blue as she does a determined dance, legs and arms raised, with Ms. Sonia Sofia Solinsky towering behind her in a lighter hue.

Run, don't walk, to your nearest independent bookstore or library to get a copy of Lulu's Mysterious Mission written by Judith Viorst with illustrations by Kevin Cornell.  This book is one hundred eighty-two pages of pure pleasure.  I know because I've read it twice.  I predict as soon as you finish this as a read aloud (and you must read it to one or more), you will be asked to read it again.  Everyone loves to laugh.  It's guaranteed with this book.

Please be sure to visit the illustrators' websites by following the links embedded in their names.
Posted by Xena's Mom at 3:28 PM