There's something particularly unsettling about having to go somewhere you don't want to go, even when you have a choice.  When in the course of events all you imagined comes true, it's almost overwhelmingly wonderful to return home; to be among those things familiar and comforting. A house, your house, no matter the size, and the natural landscape surrounding it provide sanctuary. 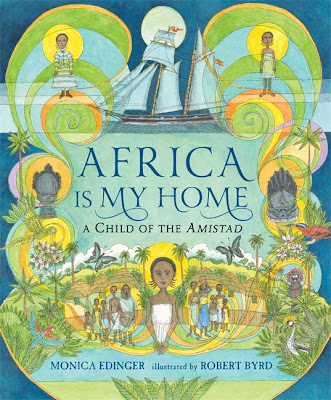 Take away choice.  Take away the knowledge of where you are going.  Take away the only land you have ever known.  Africa Is My Home:  A Child of the Amistad (Candlewick Press) written by Monica Edinger with illustrations by Robert Byrd follows a nine-year-old girl captured and placed on this slave ship.  Her accounting will linger in your mind and heart.

No one comes home.
That is what they told me.
No one.

I was born in Mendeland, West Africa, one of the greenest places on earth.

At a very young age, a child is pawned by her father to work for another family in exchange for food.  Soon thereafter, she finds herself part of a human chain, tied together by iron, marching for days toward something frightening. She has never seen an ocean.

For seven harrowing weeks, she and others live below deck in darkness.  Brought to shore in the middle of the night, in silence, she and three children are purchased the following day in Cuba.  They have never seen people wear layers of clothing.  They have never seen a horse.  It must have been terrifying for her, for all of them, to comprehend all this newness.

The four children are placed on a ship with other adult males, a ship called the Amistad. Lead by a man called Cinque the captives escape from their chains to overthrow the white men in charge of the ship.  They demand the ship set sail back to Africa.

Deceived the slaves aboard the Amistad are again captured and placed in custody.  For more than eighteen months trial after trail does not settle the fate of the Africans until it finally reaches the Supreme Court of the United States.  Freedom is finally granted to all but still they cannot go home.

Surviving the cultural differences, the changes in seasons, living with more than one family and the uncertainty of your future, this girl, the other children and men waited another eight months to sail home to Africa with a group of missionaries.  By the time she is sixteen the course of her life will alter again, taking her on another ocean voyage.  Will she ever return to her beloved homeland?

In an author's note Monica Edinger addresses her years of painstaking research and the decision to write this true story as a first person fictionalized account.  There is an intimacy in her word choices, bringing readers into the strong emotional experiences of Margru.  Vivid descriptions of place and people, good and bad, transport Margru's life from the past into the present; readers will feel her presence, hear her voice.  Placed among the narrative three times are poetic pieces of her dreams; of her mother, father and the elders.  Each ends with

I dreamed of home.

Here are a couple of passages from the book.

We walked for days and days, passing people going about their lives as we had only days before: girls with calabashes full of water on their heads, women washing in rivers, men working in fields, and boys climbing trees.  Everyone and everything made me think of home.  Of my mother, my sisters and brothers, even my father.  I cried myself to sleep thinking of them.

Our lawyers felt Kagne, Teme, and I should not be prosecuted as we had nothing to do with the rebellion, and so, on the first day of the trial, we were brought to the courtroom without the men.
"Are they hanging Cinque and the others while we are here?" I whispered to Teme.  All three of us cried and cried.  Mr. Tappan tried to comfort us, but it was to no avail.


Rendered in ink and watercolor the illustrations of Robert Byrd give readers a genuine sense of the life of Margru beginning with the matching jacket and cover.  He features her memories and dreams of home with her voyage and the challenges and changes it wrought in her world.  The blue of ocean on the front is a solid background on the opening and closing endpapers.  Travel across the Atlantic alters this person's life more than most of us can understand.

Full color pictures accentuate the narrative, beginning with a map of Africa on the first page framed in a pattern native to the area.  The text on the opposite page is framed with the lush green landscape of Mendeland; three children walking among the bushes and trees.  At times Byrd chooses to use an illustration spreading across two pages, above or below the text.

Many of the full page visuals extend to the page edge.  Single page illustrations edged in a thin black line usually have a single element breaking that frame, giving it motion and emotion.  Throughout the book, smaller pictures are inserted for emphasis.  It is this variety in size and perspective which elevates and compliments the text.  Reproductions of primary documents act as excellent bridges between the past and present.

One of the most poignant scenes is of Margru standing alone on the deck of the ship taking her home to Africa.  The small figure looking across the water, sun shining its path on the surface, is uplifting and hopeful.  Your heart will soar, cheering at her return to her homeland.


Africa is My Home:  A Child of the Amistad written by Monica Edinger with illustrations by Robert Byrd is captivating from cover to cover.  The character of Margru, her fears, her courage and the fulfillment of her dreams, is a story that needed to be told.  I encourage you to read this title and add it to your bookshelves.  In addition to the author's note a page of selected sources is included.  Update: Monica Edinger has several posts on her blog with additional resources.  The links are here, here and here.  Follow this link to an interview of Monica Edinger at Book Q & As with Deborah Kalb.