Put On Your Zoo Dancing Shoes

All you need is a beat; not even music to start to feel the urge to move your hands and feet.  Time after time when reading a particular story aloud, I've looked up from the page to see my listeners moving and grooving.  As we get deeper into the story, as the tempo of the text increases, many will start to stand, dancing around me and one another.  Dancing is a contagious act of joy. 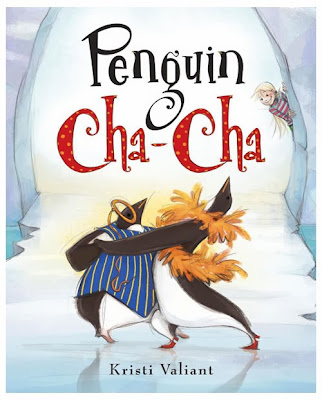 There's been many a morning, after a nighttime snowfall, when it looks as if the rabbits, deer and maybe a mouse or two have had their own party on my lawn, moving to a rhythm no one knows but them.  I would like to think other creatures in other places, when humans are unaware, are cavorting to an instinctive cadence.  Penned and pictured with pure merriment by Kristi Valiant, Penguin Cha-Cha (Random House, August 27, 2013) will have you swirling and swaying in no time at all.

Julia was wild about everything at the Romping Chomping Park and Zoo, especially the shows.

What she liked to do is climb a tree, eyes feasting on whatever performance happened to be playing on the stage.  As a dance group executed a routine one Saturday, Julia watched as a flipper...yes, a flipper... reached out to capture a feather boa.  Other articles of clothing began to disappear.  Now here's a mystery which needs solving.

Without giving it a second thought, Julia follows them back to the Penguin Cove.  Looking through the entrance all she sees is a group of statuesque penguins.  There is no feather boa, no hat, no bow...nothing but penguins.

Not to be deterred Julia decides to spy on the penguins from a bird's eye view with a pair of binoculars.  Ah! Ha!  Those penguins are dressed to the nines and...they are dancing!  She is so excited she can hardly wait to tell the zookeeper; who obviously thinks she is mistaken.

Grabbing a top hat displayed for the magic show next weekend, she hurries to Penguin Cove.  Running inside she is greeted again with penguins as still as stone.  Julia can see she needs to approach them differently.

Will a disguise do the trick?  Does she need to have a dance partner?  Nearly ready to except defeat, Julia gives it one last try.  One...Two...Cha-cha-cha  One secret is safe but...

Every page is filled with playful energy in this title.  Kristi Valiant makes use of alliteration and definitive words encouraging participation.  Readers and listeners alike will be ready to do as Julia and the penguins do.  In this book trees are not climbed but shimmied up, dancers hip-hopped and boogie-bopped and Julie and Hippo tangoed and fandangoed.  My toes are already tapping again.


Eloquent, poised penguins grace their icy abode as Julia peeks around the corner on the front jacket and cover.  A probable outcome as fun-filled and polished as the Radio City Rockettes is revealed on the back.  The red dotted color in Cha-Cha is continued along the spine, other articles of clothing and whirled across the opening and closing endpapers.

Readers will wonder why Julia is showing Hippo a how-to-dance book on the first set of title pages.  The verso and second title page picture penguins swooping from their home to waddle backstage.  Two page, single page, and smaller illustrations gathered together, each and every one colorful, are heightened by the liberal use of white framing them.  Extra details, many of them humorous, enhance the joyfulness of the story; the fish-shaped enclosure for the seals, the penguin Ferris wheel, the penguin shapes spelling out cove, and the open-mouthed hippo trash can.

Readers will be surprised to learn that Kristi Valiant creates her illustrations digitally.  One of my favorite pictures is of Julia and Hippo disguised as penguins dancing as the row of penguins watch.  The fake beaks taped to wide-rimmed blue glasses and white pillows tied about their black-clad bodies are hilarious.  The way Valiant shifts perspective on these pages generates liveliness and movement.


Readers will be ready to bebop to the beat after following Julia on her quest in Penguin Cha-Cha written and illustrated by Kristi Valiant.  I think I might be prepared with a top hat, feather boa, fan, hair bow and tie for listeners to don as they dance.  Don't be surprised when you hear the inevitable chorus of read it again as soon as you finish.  You might want to practice your cha-cha steps too.

For more information on Kristi Valiant and her work please take a moment to visit her website and blog linked in her names.  Penguin Cha-Cha has its own website linked here.  The storytime kit is linked here.  To see more artwork and read a delightful interview with Kristi Valiant, head over to Seven Impossible Things Before Breakfast.