"Doing Everything You Can"

The most detailed information I have on World War II is my Dad's perspective as a soldier in the United States Army.  Several photograph albums are filled with small black and white snapshots representative of his tour of duty.  Many of the stories he told are as fresh in my mind as if I only heard them yesterday, rather than twenty years ago. 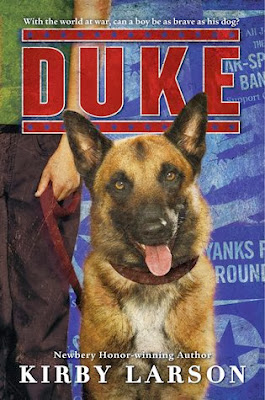 I know much less about how it was for those here at home.  Filling this gap are compelling historical fiction books by authors whose meticulous research is evident page after page.  Until I read Duke (Scholastic Press, August 27, 2013), Kirby Larson's most recent title, I had no idea family pets were used to assist military personnel during the war.

It's January 1, 1944 in Seattle, Washington.  Eleven-year-old Hobie Hanson is saying good-bye to his best friend; the family is moving to Portland so the father can work in the Navy shipyard.  Hobie's Dad is flying a B-24 on missions in Europe and his Mom has joined the Red Cross.  His seven-year-old sister, June, is even attempting to knit socks for the soldiers.

Remarks by a neighbor, announcements on the radio and even a conversation after his favorite radio show, Hop Harrigan, all urge people to do their part by loaning their pets to Dogs for Defense.  Hobie's head is telling him he should give up Duke but his heart won't let him do it.  He constantly worries about whether he is as courageous or committed as the other men in his family.

An incident with the school bully, Mitch Mitchell, and a chance meeting with the assistant regional director of Dogs for Defense, cause Hobie to reluctantly loan Duke to the program.  As if the sadness of Duke being gone is not enough, tensions at school escalate when a new student, Max Klein, joins their class.  Mitch continues to pick on Hobie, calling him names, looking for opportunities for subtle physical contact, and starts a campaign against Max due to his German heritage.  What's hardest for Hobie to understand in himself is his inability to stand up to Mitch.

A letter from the Marine assigned to Duke increases Hobie's worries.  He thought Duke would be a guard dog here at home with the Army.  Despite the kindness extended by the Marine writing the letter as if it is from Duke, Hobie, to his shame, starts to think of ways to get Duke back.

Special events at school, summer vacation baseball games, more letters from Duke and Pfc. Marv Corff, helping on his family's fishing boat and finding an abused stray dog, make up the days of Hobie's life.  Hobie learns through trial and error some tough lessons about friendship, the difference between knowing the right thing and doing the right thing and the value of family.  News from a Western Union messenger and a nurse at the naval base on Pearl Harbor change everything for Hobie.  Readers will wonder along with Hobie, if he will see his Dad or Duke again.


We quickly become attached to the characters, especially Hobie, in Kirby Larson's Duke through her brilliant writing skills.  Each chapter is titled with words designed to hint at what readers can expect within the next few pages.  Readers are made to feel more personally involved in the story with a date assigned to the chapters.

Descriptions of radio programs, products used during this time period, the buying of Victory stamps by the students, meals cooked (Porcupine Meatballs) and rations used for the purchase of certain items contribute to the authenticity of the story; you are there experiencing life on the home front during World War II.  Dialogue between the characters, the exchange of letters between those serving in the military and Hobie's family and Hobie's thoughts about all the decisions swirling about him, draw you emotionally into this book. Here are a couple of passages from this title.

"Get off," Hobie hollered. "That's mine."
"Finders keepers." Mitch pedaled faster.  Hobie picked up his pace.  He snagged part of Mitch's jacket.  The bike wobbled.  Mitch shook him off.
"Give it back!" Hobie ran harder.
"When I feel like it," Mitch called over his shoulder.  He bumped the bike over a tree root. "Ya-hoo!"
"Young man!" the Doberman's master called. "That's enough. You've had your fun."
"Yeah. Come back here," Hobie yelled.
"Come back?" Mitch repeated. "Okay." He wrenched the bike around sharply, legs pumping like pistons, and headed straight at Hobie.

Hobie and Duke sped for home together, as they'd done hundreds of times before.  But something was different for Hobie.
Like a record with a scratch in it, Mr. Rasmussen's story played over and over in his head.
And in his heart.
His are-you-doing-everything-you-can heart.


Once started Duke written by Kirby Larson will be one of those books read from beginning to end without stopping.  Readers won't be able to turn the pages fast enough, wanting to know the outcome of all the little and big things happening in Hobie's life.  There is so much love in this book; love of country, love of family and the love of a boy for his dog.  I can't recommend this book highly enough.

Please follow the link embedded in Kirby Larson's name above to access her personal website.  This link takes you to a page at Scholastic's website including a discussion guide.  Enjoy her conversation about Duke in the video below.