Know, Understand And Be Amazed

For the second time in the past five years, I've nearly been nose to nose with a white-tailed deer.  The first time Xena and I were walking through the woods of a nearby conservancy, climbing a hill.  As we came around a bend at the top, there stood a buck with a large set of antlers enjoying a meal of apples beneath a tree.   We all stood frozen for several heartbeats.

More recently as the final moments of daylight were leaving, I was hurrying to sweep the last autumn leaves off my deck.  A doe was walking into my back yard having left the safety of a nearby vacant lot.  We caught each other completely unaware. 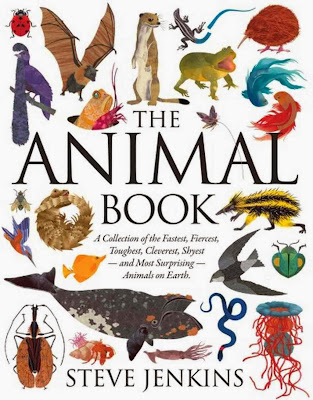 These close encounters with the animal kingdom make us pause, wonder again at the space we share and marvel at the characteristics, the adaptability, of each specie.  It stands to reason, given all his previous books on specific aspects of animals, the newest title written and illustrated by Steve Jenkins, The Animal Book: A Collection of the Fastest, Fiercest, Toughest, Cleverest, Shyest---and Most Surprising---Animals on Earth (Houghton Mifflin Books for Children), would cover the depth and breadth of all creatures.  With every page turn, the word masterpiece will continue to enter your thoughts.

In the introduction, Jenkins states:

When I was six years old, I was given a copy of Life magazine.  On the cover was a remarkable illustration of a bird and a tortoise.  ...
...This book brings together more than 300 of these animals---the exotic and the everyday---and describes some of the amazing things they can do.

A table of contents follows listing the eight categories found in this title: Animals, Family, Animal Senses, Predators, Defenses, Animal Extremes, The Story of Life and More Information.  Each section is further broken into finer points numbering between six and eleven concluding with Facts pages at the end of each.  Decades of research, unbelievable information, is found on each and every page.

In the first section we are given a five part, easy to understand, definition of an animal.  Species, their numbers, their importance in individual biomes, and their physical characteristics which place them in groups are discussed.  The proportion of insects with respect to other animals is mind-boggling.  Raise your hand if you knew there are 3,000 species of mosquito.

All manner of perpetuating a given animal are presented.  Some animals need a mate, others do not.  Attracting, fighting for and dancing with a mate are revealed.  While the comparing of egg sizes is interesting, the how and where of egg laying is fascinating and a little cringe worthy.  Birth, care of young and brothers and sisters will have readers glad of their own circumstances.  No wonder there are so many flies, it only takes one day for an egg to hatch.  It might be nice if they could trade places with elephants for awhile.

Seeing with eyes that can move in separate directions at the same time, hearing with ears on their feet, feeling vibrations in the water with tiny hairs on their skin, being able to taste with their entire body or sensing heat, electricity or the earth's magnetic field are some of the means of survival for animals.  Size and placement of their sensory organs are crucial and a direct reflection of their environment.  We can't see them with our eyes but the giant clam has more pinhole-size eyes covering its body than can be counted.

The cheetah may be the fastest sprinter on the planet but I'm glad the tiger beetle is not any larger.  Yikes!  Wily animals wait and leap, seek cover by camouflage or attract with a tricky bait to get their next meal.  Poison and specially designed body parts can be deadly for prey.  Yuck...storing food on your skin, shedding it and eating it, may be good for the crucifix toad but not for this person.

Flight, hide, mimic, poison, armor, body fluids, surprise, fight and teamwork provide defense in the face of an enemy.  Frogs that fly, a beetle pretending to be bird poo, a primate with toxic elbows, a gull chick with sticky vomit or a bird with a life-threatening kick are among many to be avoided.  Depending on an animal's placement on the food pyramid they may have many or no predators except for humans.

When the largest animals ever to have lived are compared to the size of a human, it makes you really stop to think...and wish you could see a blue whale just once in the wild.  The biggest then and now, comparing cat to cat, turtle to turtle, snake to snake, the actual size of some animals, the smallest, the loudest, the longest living, those residing in extreme climates and those most dangerous to humans are all described. You can't help but contemplate the danger to people of one of the smallest animals.

The chapter, The Story of Life, is a brief but informative look at the beginning following it to the present day.  A time line, the theory of evolution, survival of the fittest, mutation and physical characteristics are reviewed.  As hard as this concept is to fathom, Jenkins makes it clear.

Fourteen pages of animal thumbnail pictures are supplied with the page number of their appearance in the book, their size, habitat, diet and a single fact.  Pertinent words are defined in a glossary.  I am especially pleased with the inclusion of twelve pages Making Books. Steve Jenkins provides readers with his process.  The final pages are of a bibliography of sources and a page of those books Jenkins and others have previously made, parts of which are found in this title.


It's as if Steve Jenkins has taken his considerable years of work, read through each and every volume, poured over all his research and picked the best to share with his readers.  Each chapter opens with a conversational paragraph on the topic as does each subsequent portion.  The pictures selected to enhance a subject are explained in informative but not overwhelming detail.  There is not a single sentence that does not serve to engage readers.

Jenkins' torn-paper and cut-paper collage illustrations are incredible.  Texture and color so closely imitate real life readers will be enticed to look at them again and again.  The array of animal life on the matching jacket and cover is repeated in a small patterned gray on gray silhouette display on the opening and closing endpapers,

Like a naturalist's journal everywhere you look are animals of all shapes, sizes and habitats from Earth, each carefully labeled.  To accentuate his creations Jenkins makes liberal use of white space.  Each chapter beginning (starting with Family) prominently depicts the included sections in small circles at the top or bottom. The colorful, graphs and charts found throughout are a fact-finders delight.  Readers will be wowed by the two page spreads carefully placed in each section.


I can't recommend highly enough The Animal Book: A Collection of the Fastest, Fiercest, Toughest, Cleverest, Shyest---and Most Surprising---Animals on Earth written and illustrated by Steve Jenkins.  This is one of those titles that can be enjoyed by the most avid naturalist or the casual observer; there is something within these pages for everyone.  I've been completely engrossed in the reading of it for more than two days.  I can imagine conversations around the dinner table or on trips with individuals randomly calling out information gleaned from this title.  This book is a treasure.

Please follow the link embedded in Steve Jenkins' name to access his official website.  Here is a recent interview with Steve Jenkins by Roger Sutton at The Horn Book. Enjoy the book trailer below.  Here are links to my other reviews of books illustrated or written and illustrated by Steve Jenkins, The Beetle Book, My First Day and Eat Like a Bear.