It could have happened yesterday; the memory is so vivid.  Snuggled in bed in the winter of 1998 at the end of the day, I opened the cover of the current Newbery Award Medal book, Out of the Dust (Scholastic, 1997) by Karen Hesse. Having no preconceptions about the title, I was startled by the narrative structure.  It was the first novel in verse I can remember reading.  Captivated beyond belief, I was there with the characters during the Dust Bowl, learning more about this significant time in United States history than any textbook or class had ever taught me... until now. 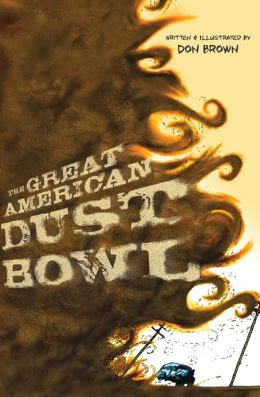 This year another stellar title, The Great American Dust Bowl (Houghton Mifflin Harcourt, October, 2013) by author/illustrator Don Brown was released.  Using the graphic novel format, we are privy to the causes of and conditions during this event which impacted our country for almost ten years.  This mesmerizing accounting will change the way you think about the Dust Bowl.

A speck of dust is a tiny thing.
Five of them could fit on the period
at the end of this sentence.

These two sentences sit in the middle of a pictured dust storm, birds and rabbits fleeing as a man exclaims:

Oh my God!
Here it comes!

Don Brown goes on to explain what occurred on April 14, 1935 using it as an introduction to the book and the next fourteen pages.  In these pages with meticulous intent, he covers the formation of the land, the Great Plains, the life of the Native Americans, the bison who were an inherent part of their lives, the arrival of the settlers and their attempts at raising cattle and farming wheat and the arrival of the drought in 1931.

As the days without rain or little rain stretched into months, wild storms visited the people and the land.  Fourteen such storms were documented in 1932.  Can you even imagine a dust cloud twenty times higher than the Washington Monument?

So much dirt was in the air when any rain did fall it was filled with mud balls capable of denting cars, snow looked like it was chocolate covered and dust storms would be so thick, even with artificial light, sight was limited.  People outside would become lost and suffocate.  One of the more unique facts is the air would be filled with electricity causing all kinds of havoc and weird phenomenon.

Regardless of people's efforts, dust seeped into every nook and cranny whether it was storming or not.  Attic floors, room ceilings, bowed under the weight.  Animals and people became ill and died from the dust in their respiratory systems.

In case you think this impacted only portions of the states of New Mexico, Colorado, Oklahoma, Kansas and Texas, think again.  In 1934 a storm was so massive it reached all the way east to the Atlantic Ocean.  Extreme temperatures, increased bug populations, rabbit problems and snakes hanging on fences were part and parcel of these years where only the strongest survived.

Don Brown circles back to the beginning date of April 14, 1935 recounting all the horrific details of that day for sixteen pages.  In the final panels we see how the government stepped in to help people prepare for future storms by planting trees and grass as well as teaching them how to farm, planting crops that would not deplete the land.  Closing thoughts leave readers with points to ponder.  Can we learn from history?  Can we prevent it from repeating itself?


Several techniques make this narrative compelling.  Rather than a listing of facts sentence after sentence, Don Brown as he did earlier this year with Henry and the Cannons, places those pieces of information among deliberately chosen words and phrases.  He makes us feel as if this is a segment on the nightly news rather than seventy years old.  He uses easily identified comparisons so readers can gain perspective.  Interspersed in his depictions are speech bubbles from the people in his illustrations, uttering actual documented observations.  Here is an example.

My horse...his eyes would water and his nose would water, and I'd wipe his eyes. It'd just be a lot of mud in the palm of my hands. I'd dig it out of his nostrils.


Rendered in pen and ink with digital paint, the illustrations adhere to a color palette, for the most part, of golds and browns.  Brown features the epic storm of April 14, 1935 on the front jacket and cover, extending the dust cloud to the back, framing people digging out from it.  Every page turn is a study in layout and design.

Text might be set within an illustration or placed in a separate element.  Passage of time is portrayed in a series of panels of varying sizes depending on the narrative.  Items may appear within frames or outside them.  Everything has been placed on a page with care.  While there is not a great amount of detail on the people's faces we are well aware of their emotional moods; body stance is critical. One of my favorite three panels, across two pages, is of the change from rain to drought highlighting a single farmer's perceptions.


Whether used in conjunction with a lesson in the classroom or as an outstanding historical nonfiction title, The Great Dust Bowl written and illustrated by Don Brown can be appreciated by any reader at nearly any age.  A selected bibliography and source notes at the end leave no doubt in a reader's mind as to the authenticity of this book.  That's what makes this title special---it holds you in its grasp as if it is fiction.  One copy will not be enough for your library; plan on more.  Please follow the link embedded in Don Brown's name to access his official website.