Back in 2001 I discovered a poster by Rick Ruggles titled Love is where you find it...  From that time forward I have tried to slow down to notice heart shapes appearing everywhere, especially when Xena and I take our walks; discovering those special stones on the beach is like finding a priceless possession.  But sometimes you don't find the heart, the love, unexpectedly, it finds you. 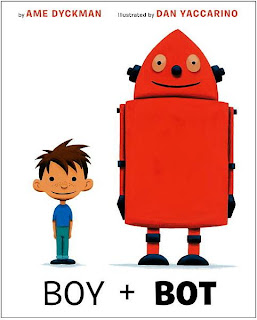 A boy was collecting pinecones in his wagon when he met a robot.

Can you imagine the wonder of having a big red robot appear behind you ?  Trusting in spirit, quick to see a potential playmate, the boy asks him to play.  The robot's reply is, of course, in the affirmative.

Finding fun in the great outdoors, their adventures are cut short when a rock and the robot meet.  With no power supply, to the boy, the robot is in need of help; believing him to be ill. Packing him up in his wagon they set off for the boy's home.

Doing what he knows should make the silent Bot better, the two finally settle in for the night.  Peeping in to check on Boy, his parents, not knowing Bot is behind the door, trigger his switch to on.  Now it's Bot's turn to deduce that Boy, sleeping soundly, is malfunctioning.

Carrying Boy back to his home Bot is likewise seeking to fix the problem.  In the nick of time the Inventor steps in, startles Boy into wakefulness and makes an important phone call.  The two fast friends make plans for the next day to play and...they do so with great joy.

Ame Dyckman has discovered a very special place were readers' affections wish to reside.  Her narrative guides us down the beloved path of finding friendship with those unlike ourselves; of caring despite differences.  With clarity, using short sentences, Dyckman depicts in both Boy and Bot the characteristics found in best buddies.

On watercolor paper with gouache Dan Yaccarino fashions illustrations from a primary color palette with added greens and purples; bold and radiant, eliciting a smile from readers.  Endpapers picture both the Boy's and Bot's typical "toys".  The title page begins the story with Boy pulling his red wagon past an evergreen with Bot peering from behind.

Freckles sprinkled across Boy's nose and cheeks, smiles playing about Boy's and Bot's mouths, bright-eyed admiration, the one for the other, and a one-eyed light bulb figure walking about on legs in Bot's home, are little extra details readers will notice and appreciate.  Yaccarino has chosen to vary his image sizes; double page, single page or several on one page all framed by the appearance of a casual brush stroke.  But the way he depicts Dyckman's final sentence,

And the friends did.

is masterful; over the final three pages a series of images clearly showing the cementing of a bond not to be broken.