We make wishes when we blow out candles on a birthday cake, get the largest piece of a turkey bone, see the first star of the evening or perhaps one falling from the night sky.  When telling stories in the library media center my students and I will light the magic lamp before beginning (a gift from a parent decades ago in the shape of Aladdin's lamp).  As we finish a student is selected to blow it out as everyone makes three wishes; for someone anywhere in the world needing something good, for someone they love and the final wish for themselves. 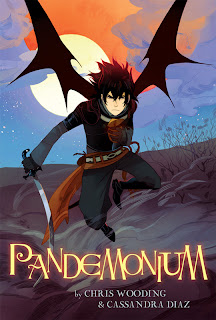 Wishes are a sign hope is alive; reaching toward goals or satisfying a yearning.  I am always quick to remind my students (and myself) to be careful for what they wish.  Wishes may come true but not quite the way expected as the main character in the new graphic novel Pandemonium (Graphix, an imprint of Scholastic) by Chris Wooding and Cassandra Diaz discovers.

As the story begins Seifer Tombchewer (his last name is a nickname given to his grandfather for keeping his teeth sharp by gnawing on tombstones), takes to the skies, the skilled captain of the Skullball team garnering another victory for his village, Crowscale. Despite his father's lack of support for anything other than Skullball, Seifer longs to leave; exploring what lies beyond the mountains. As evening descends Seifer visits and leaves his grandfather's home only to be snatched by the Velvet Spies, agents of the royal family Pandemonium.

An aging, somewhat batty, Queen, is supported by her grandchildren Princess Sarcoma, Prince Talon and Princess Hypoxia.  The children's parents were killed in an invention they failed to perfect.  As the firstborn male, Prince Talon is the Lord Defender of the Realm, leader of the armies.  Why has Seifer been kidnapped?  Prince Talon is missing and Seifer looks enough like him to be his twin.

Rather than be an appetizer for the Psycho Carnage Beasts, against his will, Seifer agrees to masquerade as Prince Talon.  Duty-bound assistance to Princess Sarcoma with the larger problem of imminent invasion by their enemies is complicated by royal advisor, Lumbago, trying to scare him into being a Prince Talon clone, the real Prince's cat (about the size of a Stegosaurus) swallowing him whole repeatedly, Lady Carcassa Malefica, a maker of Magika and his new love interest, his fiance, Lady Asphyxia, and those who want him dead...now. An unforeseen circumstance, a right of challenge combat, reveals his true character, placing others before himself, the opposite of the real prince.

Tension intensifies as those who want Seifer dead increase their efforts, a battle for the Darkling Realm's rule is waged and intrigue deepens with help from an unlikely source.  Can a Skullball champion, a commoner from the mountains, play the role of Prince Talon successfully? Action speeds ahead quickly toward an ending of the definite, drastic dilemma variety.

All the classic elements of fantasy are skillfully woven into the story's fabric by Chris Wooding; good versus evil, a hero, magic, a secondary world, special characters and the use of a fantastical object.  What sets this apart from others are the players, complete with wings, strengths and flaws, the snappy dialogue between them, the generous helping of humor throughout and the feeling of being about to cross over to the dark side at any given moment.  Wooding reels readers in with a plot promising more of the same to come; hints that all is not as it seems to be.  Here are a couple of narrative samples.

There's no spell on the door anymore, you know.  It only works once.  You won't get roasted again.
It's not the door I'm worried about.
Awwww! Are you afraid of the cat?
Of course I am.  She's three times my size and she wants to kill me.
But Mog-ra wouldn't hurt you.  You two have always been best friends.  Besides, she's such a cute little thing.
You haven't been inside her mouth.

...Oh my there it is that's Fang where the chieftain of the  Ologs lives I can't wait to meet him I'm so excited  EEEEEEEE!
You know the Psycho Carnage Beasts eat girls too.
Don't tempt me.

The graphics employing an edgy, darkened palette, by debut illustrator, Cassandra Diaz, partner well with Wooding's storyline. Her character depictions, the world in which they are placed and action sequences are completely captivating.  There is a strength, a boldness, about her illustrations attracting readers to the Darkling Realm, those who reside within its borders and the lives they lead.

Stepping into the world created by Chris Wooding in his first graphic novel, Pandemonium, ablaze with visuals by Cassandra Diaz, is a walk well worth taking.  Keen pacing, fierce action and characters you will learn to love or hate, not to mention an ending assuring another volume, is a winning combination.  Be prepared...you'll be hooked and will be hard pressed not to read this in its entirety at one sitting.