There really is no middle of the road when it comes to the relationship between cats and dogs.  When I even whisper the "C" word around my canine companion, she is off like a shot.  Sometimes they will tolerate one another by giving each a wide berth when passing or in those rare, exquisite instances they will become fast friends. 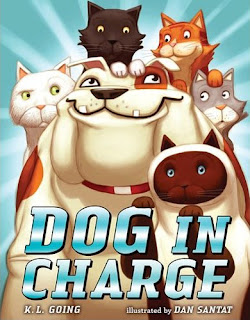 In her picture book debut, Michael L. Printz Honor (Fat Kid Rules the World) award winning author, K. L. Going, tells the tale of Dog In Charge (Dial Books for Young Readers) with illustrations by Dan Santat.  Not being a cat owner myself, I was curious as to what Going would bring to the story as her family is in the possession of two very wily cats.  What I do know is, no one is ever in charge of cats; therein lies the humor.


Dogs will do anything for a treat; come to think of it, everyone likes treats but not as much as dogs.  Dog, for a single treat, sits, stays and dances in a circle.  His human praises him.

Needing to go to the store the family places Dog in charge of five, not one, two or three, but five cats.  Seeing them lined up in a row on the living room sofa, all wide-eyed and still, he imagines them sitting and staying as he does.  In a flash they vanish.

Dog discovers each of them throughout the house exactly where they should not be; lapping up milk on the kitchen counter or pawing through the bathroom clothes hamper.  When Dog barks he is issuing one word commands but readers will be fully aware the cats understand those barks to be something else entirely. Chaos ensues.

Frustrated to say the least Dog wonders whether he will still be the stellar dog worthy of treats.  Treats!?  What about the cat treats?  He's sits, stays and dances for treats, why not the cats?

The unthinkable happens; dogs will be dogs.  What's the saying about Lay's potato chips?   Exhausted Dog falls asleep as those five frisky felines slink into the kitchen surrounding him before they execute the purr-fect plan.

K. L. Going knows cats...and dogs.   Her ability to depict Dog's thoughts and the cats actions places her in the "whisperer" category.  Her word choice is "on the nose" every time;

give readers the opportunity to be active participants in the storytelling.

Dan Santat designs a front and back cover picturing two completely different scenarios foreshadowing events in the story.  His endpapers are reminiscent of the pictures taken in a photo booth; twelve varying expressions on Dog's face.  Readers will be chuckling before the first page is turned. (I was laughing out loud.)

His illustrations enhance K. L. Going's already present humor; placing a bow on Dog's head with a tutu around his waist as he sits, stays and dances.  The layout of visuals is altered giving this book the feel of a comic or graphic novel; insets, overlaps, and the four illustrations on a two-page spread tied together by a clock in the center.  From beginning to end there is never any doubt about each character's emotions; the closeups say it all.

Dog In Charge written by K. L. Going is a story with a capital "H" for hilarity that dog and cat lovers will enjoy not once, not twice, not three times but maybe five times noticing details cleverly inserted by illustrator Dan Santat.  Picture books are never better then when two talented artists such as Going and Santat collaborate.  This book is meant for sharing.

It would be a great idea to tell the story of Why Dogs Chase Cats found in the book How Many Spots Does a Leopard Have? And Other Tales by Julius Lester, illustrated by David Shannon before reading this title.  Following the telling/reading children could add action adjectives to a virtual post-it board acting them out randomly.  I'm also thinking that sugar cookies cut in the shape of dog biscuits would be a good closing.
Posted by Xena's Mom at 7:43 AM