I love reading; in fact when a friend suggested I watch a new show the other night I calmly replied I had not had my television on for more then three months.  Nonfiction or fiction, any genre will do.  But growing up I had a steady diet of historical fiction supplied by my Mom and Dad passing on their own favorites in addition to those titles I was able to pick up at the library for my age group. 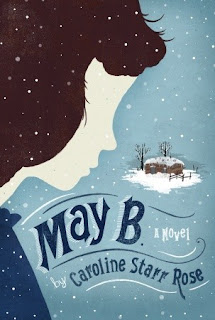 The best of historical fiction, like any well-written or spoken story, has the ability to transport the reader or listener to a specific place or time, to create characters with whom one can easily identify and to bring the past into the present as if it only happened yesterday.  When a reader's senses are awakened to the point of a deep emotional involvement, that's storytelling at its finest.  On every single page of May B. A Novel (Schwartz & Wade Books) by Caroline Starr Rose, a debut author, make no mistake, you are there.

"It's for the best," Ma says,
yanking to braid my hair,
trying to make something of what's left.

Ma and Pa want me to leave
and live with strangers.

This first chapter, this first page, grips you with the complete frustration of the narrator, Mavis Elizabeth Betterly. Twelve years old living on the prairie of Kansas in a sod home, she is being sent to stay with neighbors fifteen miles away until Christmas.  It seems that the new Mrs. Oblinger is not adjusting well to the isolation of this life; May B.'s paid companionship will ease the financial burdens of her own family.

Arrival at the Oblinger's soddy reveals the new bride to be little older than May B. herself.  Aloof, unkind and completely lacking the basic skills necessary to manage a home, May B. soon realizes most of the tasks will fall to her.  Any thought she had of practicing, perfecting her learning, her reading skills, so as not to fall any further behind than she already is, are quickly forgotten.

Days pass in sameness until two things happen which threaten May B.'s very existence.  Mrs. Oblinger takes a horse for a ride but does not return.  It is only later May B. discovers the note.  Making haste her husband hitches the other horse to his wagon, taking his gun, to find his wife before she leaves on a train back to Ohio.

After four days May B. comes to the stark realization she has been abandoned; she will be living alone from August until the end of December.  Wrapping her mind around this reality is a test of her strength and determination.  In subsequent chapters readers follow her day to day mental struggles, her elation at finally having time to do as she wishes, her fear of running out of supplies, keeping warm and staying safe in the soddy.

Intermingled with her chores, trying to keep busy, May B.'s mind wanders to her inability to read.  Two different teachers, two different philosophies give May B. first hope then a sense of utter despair in her capacity to learn.  What is wrong with her?  Why can't she read words?

Days melt one into the other; May B.'s sense of time is becoming fuzzy.  Supplies are running low and first frost, then a sudden dusting of snow, cause her to wonder if it is now October or even later.  Sounds in the night and prints in the dirt show she is not as alone as she thought; a wolf has found her.

So much seems to be against May B., dwindling food, proper fuel, adequate shelter for the colder temperatures, the nearly constant thoughts of her problems at school but when an early blizzard blows across the prairie, one truly fears for her.  Page by page tension builds as readers wonder about her chances for survival.  Will this adventure, not of her choosing, be the ultimate test of her true character?

Writing in verse, in a style research revealed as appropriate for the time period,  Caroline Starr Rose has crafted a setting, a series of events and characters so believable it's like stepping back in time.  Her use of words, sometimes as little as a single sentence for a chapter, make readers acutely aware of the details of May B.'s life.  As we are privy to May B.'s every thought, we can not help but cheer, feel an admiration, for this young woman.

Here are several examples of her impressive way with words in verse.


From the calendar I tear away
one month,
then two.
Is it October
or November?

Time was made
for others,
not for someone
all alone.

So many things
I know about myself
I've learned from others.
Without someone else to listen,
to judge,
to tell me what to do,
and to choose
who I am,
do I get to decide for myself?

With a storyline completely riveting from beginning to end, the harsh beauty of life on the prairie of 1870s Kansas is brought home to readers in May B. A Novel written by Caroline Starr Rose.  Chapters in verse disclose a testament to the will, heart and very soul of a twelve year old girl faced with seemingly insurmountable adversity.  May B. A Novel comes with high recommendations from this reader.  Rose has created a teacher's guide on her website which is linked to her name above.
Posted by Xena's Mom at 6:55 AM