Mystery Encased in Ice Freed by the Power of Words

When I reviewed in December of 2010 (It hardly seems that long ago, the memory of that book is so vivid in my mind.) Matthew J. Kirby's debut novel, The Clockwork Three,  I ended by saying that I was waiting and wanting another escapade by this noteworthy author. Matthew Kirby has delivered another superb contribution to the world of children's and young adults' literature in the title, Icefall. 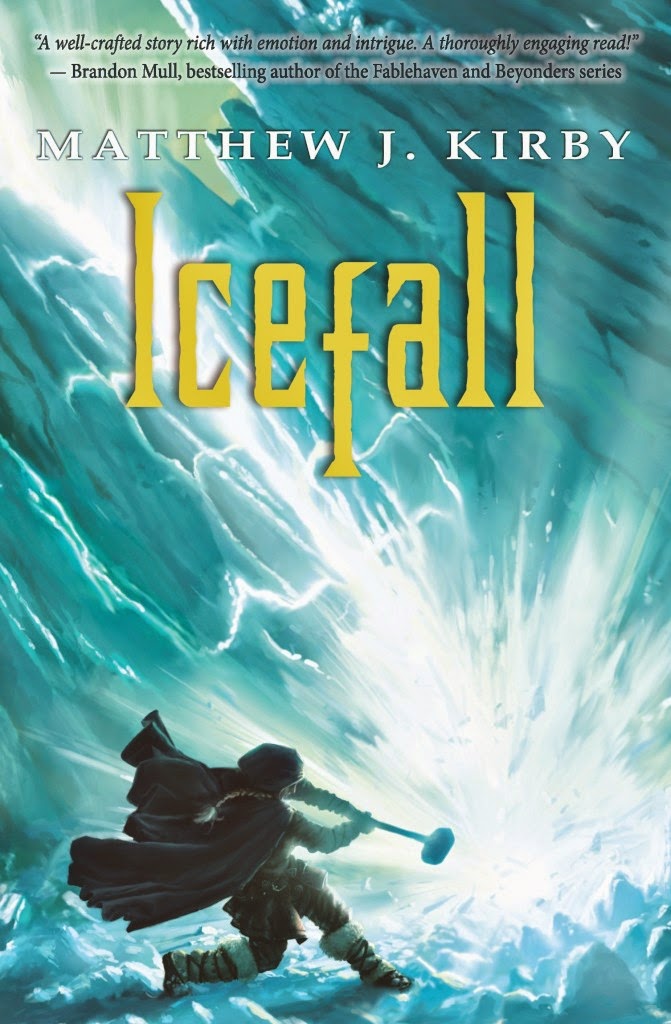 I just finished reading Icefall for the second time.  The first time I read it in huge gulps like a desert traveler throat and lips parched wanting cold sweet water.  The second time I read slowly like a connoisseur savoring each and every element rolling it around in my mind like a taster of fine food does on their tongue.  In a word, Icefall is a masterpiece.

It is first and foremost a story that surrounds you, trapping you with its gripping adventure and treacherous mystery, much as the frigid cold, snow and ice ensnares the characters.  A mighty Viking king is at war with a bitter enemy whose request was spurned; an enemy who wants that which he can not have.  This king sends his three children to a remote steading bordered by a fjord that will freeze for the winter, a dark primal forest, mountains and an enormous wall of ice.  These three, Asa, his beautiful eldest daughter, Harald, his young son and heir, fierce in his pride and Solveig, the middle child, overlooked by her father but nonetheless a young woman whose beauty and strength are yet to be discovered, are accompanied by her father's second in command, Per, his men, Bera, a mother figure for the children and their cook, her son Raudi, and Ole, a thrall.

As the group waits daily for additional final provisions before the ferocity of winter sets in, a ship does come but it is filled with more than food and supplies, it brings berserkers, the king's personal guard.  Led by Hake they have been sent to further protect the heir.  Alric, the king's skald, is with them too; his presence is a curiosity.  Accused of coming due to cowardice, the storyteller responds.

Alric shrugs.  "Can your sword grant immortality?  Because my voice can.  You would defend the king's body, an honorable endeavor, but I would defend his legend. Which do you think will outlast the other, Captain?"

As winter blankets the land, water and sky, so too does it cover the souls of each person now locked together in survival and unease. Tension descends as events lead to the inevitable conclusion, there is a traitor in their midst.  Someone wishes to weaken those that guard the king's son and daughters.  Everyone is suspect.  Added to this is Solvieg's recurring dream that is either a premonition of dire consequences or an outgrowth of her escalating fears.

Secondly, Kirby has used a technique in bringing this story to us that is brilliant in concept but even more alluring in its fruition. Through Solvieg, chapter by chapter,  Kirby relates the events.  It is her voice that gives us a description of the changing season, the mood and manner of all assembled.  We are privy to the innermost thoughts and struggles of this young woman who slowly, not without doubt, grows into her true potential.  We feel her joys no matter how short lived, her deep sadness, her sense of desperation and her resolve.

I haven't taken my eyes from the wolf.  And he doesn't seem to have taken his eyes from me.  His gaze is intense, full of confidence, without any hostility.  He is not the wolf of my dream.  He knows his place in the world and where he belongs.  I wish I could know the same.

I pluck at the rag in my hands.  "Bravery is nothing without strength."
"But you have that, too."
I say nothing.
"You are stronger than me," Asa says.  "And in bravery and strength, there is a kind of beauty."
"Not like your beauty."
"No. No, not like mine.  Your beauty won't ever fade."

But set within these twenty-three chapters are separate single and double page narratives that are being told to us and other listeners as well.  These small pieces of a larger story give an intimacy and immediacy to the overall tale by defining the characters and Solvieg's assessment of them.  It is in the final entry in this recounting that we see the wisdom that has become Solvieg's guide.  It houses one of my favorite paragraphs in this book.

Thirdly, Mr. Matthew Kirby, I have the heart of a storyteller, most librarians do.  We tell small stories everyday as we bring readers to books.  I have gone farther than that though.  I have been a member for many years of the National Storytelling Association located in Jonesborough, Tennessee.  I have attended several of their National Storytelling Festivals in October as well as classes held during the summer at their institute.  I have taught storytelling in speech and drama classrooms.  I love the beauty and power of a single voice bringing to listeners gifts that they may not know they need until the telling is completed.

In bringing the skald, Alric, to the fortress Icefall goes from a finely wrought adventure taunt with unanswered questions, bristling with battle scenes and a climatic pursuit to a whole new level.  Through the tellings of Alric and Solvieg, as she shapes her sight and memory, of the Norse legends that gave birth and life to this glacial landscape, readers are given insight into the true magical might of story; it is the tie that binds not only this tale but all the stories of our lives together.

He closes his eyes.  "Stories give you a way to see things.  A way to understand the events of your life.  Even if you don't realize it while you're hearing the tale."

The potency of story is a grand thing to behold as is Icefall.  Matthew Kirby can spin a tale like none other using beautifully descriptive language that allows his readers to transcend their reality taking them into a harsh land of the past peopled with unforgettable characters whose actions though very human do rise almost to the divine.

Someday Mr. Kirby the PA in your school may announce that a strange woman is there to see you.  That will be me hoping to shake your hand and thank you in person for this wondrous story of epic proportions.