Check Out The "Kid" At Champlain Elementary School

With several New York Times bestsellers to his credit, A Fine, Fine School by Sharon Creech and Diary of a Worm, Diary of a Spider and Diary of a Fly by Doreen Cronin,  as well as illustrating books for well know authors, William Steig, Robie H. Harris, Kate DeCamillo and Alison McGhee, cartoonist, Harry Bliss, is no stranger to the world of children's literature.  His August 2011 title, Bailey, is a stellar representation of his work. 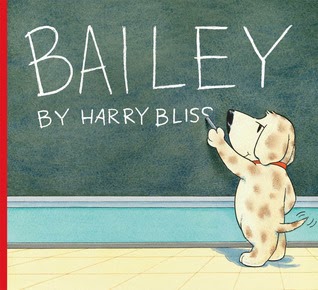 Shadowing Bailey is a joy-filled treat for readers as he rises and shines early, performs his morning
cleansing rituals and selects appropriate attire that showcases his complete assuredness.  Carrying his backpack he leaves his house heading for the school bus nearly missing it again when a particularly appealing stick catches his eye.

Arriving at school he longingly  looks at a familiar squirrel.  As he enters the building the principal offers a greeting and a request to try not to lick anyone today.  Gathering with the rest of his classmates he unloads his backpack at his cubby and approaches his teacher with a gift for her birthday, an old, chewed-up bone, his favorite.

Bailey's day at school is wonderfully typical:  sharing time, math, lunch, presentation of his big report, art, recess, working in the school garden, music, dancing and quiet reading at day's end. But Bailey's approach to each of these activities is anything but typical for he is a pup with extraordinary skills and a huge appetite for pure dogginess.

To begin, that standard reply to a questioning teacher of where one's homework might be, the dog ate it, is true and Bailey has a stomach ache to prove it.  During math instead of numbers Bailey uses dog bones to show his work on the chalkboard.  After sitting at the table during lunch with his classmates, who do not want to trade a sandwich for a dog bone, Bailey dives into the trash can to whet his hunger. His tale wags out of control when using it as a brush in art class.  As each hour progresses Bailey gives it his own canine spin much to the delight of his classroom companions; that dog sure can dance.

At the end of the school day Bailey nearly misses the bus again having fallen asleep after the reading of his most loved chapter 7, Catching a squirrel.  He does call out from the school bus, in his mind, to that squirrel hanging on the tree just out of reach.

What sets this title far apart from others is the combination of humanness without the loss of canine character.  When readers peek into his home in the morning it looks just like ours except Bliss has added descriptive details in his illustrations that are comforting and comic; a bedspread and pillow covered in dog bones with a chewed up stick and collar on the floor, a cat on the calendar eyes shifted to the bird on the window sill tweeting, Don't be late!, and instead of clothing hanging in the closet a colorful array of collars swing from the hangers.  On the outside his house looks like a dormered Cape Cod complete with flower-filled window boxes.

During the day Bailey never speaks to anyone but readers have a clear perception of his thinking through thought balloons.  While most of his classmates would rather be anywhere but on the bus, Bailey is saying, Faster! Faster! head hanging out the window.

Bliss has cleverly assigned speaking text to his human characters as well as thought balloons so readers are completely engaged during the entire story.  Humor abounds throughout  the narration and within the nuances of his graphics.

Part of the appeal for me was the choice that Bliss made to portray Bailey's home, the school and the surrounding community as more traditional; a rural setting bringing readers to a slower paced environment.  This coupled with his visuals convey a sense of warmth, security and sweet serenity.  The cover art really sets the tone for the complete piece, right down to the tail-wagging detail.  Dog people know that tail wagging equals happiness.  And Bailey is one happy dog.

A day in the life of this precious pooch at school is entirely endearing.  Flawless in every aspect Bailey written and illustrated by Harry Bliss is the definitive title of a dog at school.  I love everything about this book.  My students will too.