The Intrepid Tractor Is Back!

That little indomitable red tractor that putt, puff,  puttedy, chuffed  his way into our hearts in the title, Otis, is back.  From the imagination and hand of his author/illustrator, Loren Long, readers follow the friendly farm fixture on a new adventure, Otis and the Tornado. 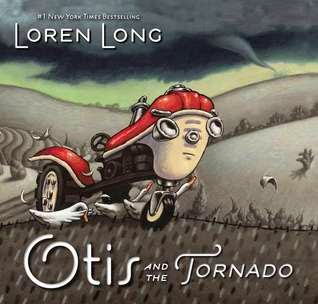 After work on a sunny summer day Otis and his companion, the little calf, play.  They like nothing better than a grand game of follow-the-leader gathering all their other farm friends to join the line.  Each takes a turn at lead, winding around all the familiar landmarks-the apple tree, the barn, the rolling hill, Mud Pond, the cornfield, the meadow and the banks of Mud Creek.

This daily delight is enjoyed by all except for...the bull.  Fierce, unfriendly and fearsome, he does not participate staying alone in his fenced pasture.  Having had his attempts at friendship spurned, even Otis stays away.

Life on the farm is good until one day when a humdinger of a Midwestern storm rolls in.

Otis didn't mind the rain, but there was something different about this storm that he could feel down deep in his pipes.

When Otis sees all the farm hands heading to the cellar not taking the time to care for the animals, he gazes skyward into the greening grayness....a TORNADO.  Without a moment to spare Otis rallies the troops into a faster paced version of that grand game of follow-the-leader straight down into Mud Creek where they wait.  But, what's that sound?

A large fierce, unfriendly, fearsome and now frantic someone has been left behind.  Trouble with a capital "T" is heading his way.  Can a tractor triumph?

Mother Nature has her way but so does Otis.  Out of adversity old friendships grow stronger and new ones are forged.

Gouache and pencil are like tools of magic in the capable hands of Loren Long as he visually portrays this tale.  His style and colors are reminiscent of an older, more agricultural America.

Each illustration is framed with a heavy black line as are most of the elements within the frames.  Readers feel as though they are slowly walking through an art gallery as the pages turn.  When appropriate the frame is broken; by puffs of smoke from Otis, an apple tossed to the bull or Otis charging out of Mud Creek.

Long alternates between single page spreads with text opposite, centered on white space or text beneath each illustration to a two page quartet of panels showing a progression as in the follow-the-leader game to the larger two page spreads for emphasis; the bull, a landscape view of the tornado or Otis with his farm friends eyes closed nestled on the bottom of Mud Creek.  I would truly frame any one of these to hang in my home.

Otis and the Tornado written and illustrated by Loren Long is a priceless portrait combining timeless text and vivid visuals bringing to readers the defining ingredients needed in a recipe for heroism and friendship.

Take a journey at Long's web site by following the link embedded above.  He has original sketches and finished pieces from Otis including those not used.  A wonderful Q an A interview by Publishers Weekly is linked on the Otis page as are explanatory YouTube videos and great story stretchers for readers, six pages of activities.

For me reading Otis and now, Otis and the Tornado, is like going to a place that is safe, snugly and sincere; a place of affection and contentment.  It doesn't get much better than that.
Posted by Xena's Mom at 5:58 AM