It's a bird...it's a plane...it's The Astonishing Secret of Awesome Man written by Michael Chabon and illustrated by Jake Parker.  This is Chabon's first book for children; his The Amazing Adventures of Kavalier & Clay won the 2001 Pulitzer Prize for Fiction.  Parker is best known in our library media center for his Missile Mouse graphic novels. 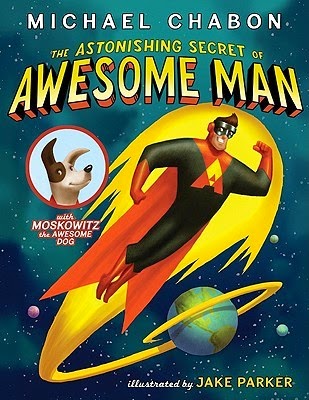 Awesome Man is no ordinary superhero as he shows off his distinguishing attire and wows readers with his incredible abilities.

I can shoot positronic rays out of my eyeballs.  And can I tell you something?  Giant killer robots just hate that stuff.

But what bumps his awesomeness to the tip-top is his secret, totally secret, identity which he is about to whisper ever so quietly to readers, so softly only Moskowitz the Awesome Dog can hear. When Professor Von Evil strides down the street in his Antimatter Slimebot!  Making short work of the Professor with an Awesome Power Grip, barely having a moment to catch his breath, his arch nemesis, the Flaming Eyeball attacks but to his chagrin escapes.

To calm his anger he seeks solitude under the Arctic Ocean in the Fortress of Awesome loading up on his nearly depleted positrons.

All this evil fighting can make a superhero tired.  Real tired. Pooped.  (I love saying "pooped".)

Recharged, seeking and finding evil villains, including the illusive Flaming Eyeball, at the Secret Headquarters of Worldwide Wickedness our masked, caped, flying man of unmatched strength triumphs exiting speedily to the Fortress of Awesome; to rest, to fight another day.

In the final pages the text and graphics reveal to readers the secret identity, it's awesomeness will grip them with the same power as this super story.

Chabon has composed a narration laden with classic superhero phrases sure to delight readers of all ages.  Throughout the tale hints, some subtle and some outright, about the identity of Awesome Man are left for readers to discover.  Statements made by our hero clearly point to his true nature, only he would say those exact words.

Parker's work pairs perfectly with Chabon's telling.  On one of his blog posts he speaks to the process for producing these bright, bold characters that blast into the reader's realm.

I cast a wide net to see if I could grasp what Michael was envisioning for this character. ...

I wanted a halftone newsprint feel to the backgrounds of the book to give it a classic comic book feeling. ...  (Unfortunately I could not longer locate the blog post at the time of this update 11/2/2014.)


From pencil sketches, to finished pencil drawings to color, endpapers and all the pages in between (not to mention a cover that reaches out and grabs you) shout out loud that Parker has accomplished his mission providing impressive illustrations that beg, as does the text, to be relished repeatedly.  Jake Parker's graphics are better than Saturday morning cartoons!


Let's hope that the dynamic duo of Chabon and Parker swoops in to save the day again; now that would be totally awesome.
Posted by Xena's Mom at 6:22 AM