As soon as I began reading Jason Barron's Ballad of the Northland I knew that it was going to reach deep into my soul rearranging the bits and pieces there into a better whole. And it did.


Recall the coldest you have ever been, then multiple it ten times, add in gale force winds and blinding snow. Picture a family whose snowmobile has stalled on the ice of Norton Sound between Shaktoolik and Koyuk, Alaska. A smothering darkness has fallen as the father leaves for help despite his wife's pleas to not leave them alone. The Boy and his younger brother huddle with their mother sweetly singing to them. The singing fades and his brother no longer hugs him back. The Boy is alone with the wind or has he become the wind? 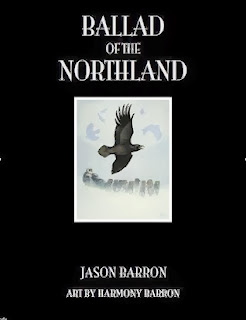 Now at twelve it is Uncle, Auntie, Middle Cousin and Little Cousin who are The Boy’s family. Poverty relentlessly pursues them day by day as they barely eke out an existence by fishing, hunting and trapping along and around the Yentna River in Matsu Valley. Life is wrought with harrowing experiences and constant brushes with death in this land of stark, rugged glory which cares naught for man or beast. Uncle keeps huskies for transportation and in pursuit of his desire to win The Great Race, The Iditarod.

Later given the opportunity to have a small team of dogs running his own trapline and assisting Uncle in running his longer line as circumstances dictated, The Boy knows that his center can only be found within the bond formed with these dogs. When his feet are on the runners of the sled or he is running alongside his team, only then can he be true to himself. Only then can he become one with these canine creations. That is his gift.
His longest run before this had been no more than twenty miles, and he knew that this new adventure would pose a difficult challenge for his small team. Right away, he brought their speed down to a precise trot, careful not to put too much pressure on the drag, instead using the influence of his soft voice and even tempered body language to calm the dogs down….Pilot had joined Apache in the lead. She was short and stocky and not very fast, but The Boy sensed in her a mental toughness that would never waver in the face of adversity; a heart that would always beat for her master’s command.

As the Boy’s life story is laid before us it is always enveloped by the stunning landscape of Alaska breathtakingly described by the experienced eye of Barron.
Through the haze, a mountain range grew in outline to the southwest; gentle lines describing a long waist and full hips, half turned shoulder and slender throat, all in pastel blues and white. As they mushed towards the elegant figure of the Sleeping Lady, the sun settled orange and full behind her back and limned her outline in a flare of spun gold, blanketing the rest of her in a stark black shadow that dazzled The Boy’s eye.

The Great Race is not a dream for The Boy but a journey to be realized at all costs. He begins with the shorter runs building his reputation.
It is just before his first race of many that The Whaler, another musher, speaks with him.
The Boy stared at this savage, this mentor. “Run and be true. Trust your dogs.” The Whaler told him. He gestured up the river. “You were born to this, and the river knows you to be a friend. You know its ways, and there is respect. It will help you even while it’s working to crush your enemies.”
“My enemies?”
“Everybody racing against you; everybody who would choose to place their hopes and dreams before yours. Yes, your enemies.” The Boy is now sixteen.

One of the greatest dangers for mushers and their dogs is moose. Barron’s description of such an attack is stark and frightening in its reality. His ability to comprehend the twists and turns of life in its goodness and sadness is exemplified with this passage following the attack. (SPOILER ALERT)

Sometime in the long hours of darkness, Halo came to a brief lucidity and quietly dragged her ruined frame out of the bunkroom and into the cold and laid herself down under the stars. She had been terribly afraid, but was no longer. Now she just gazed up at the sky pulsing with a display of northern lights which almost seemed to reach down and caress her body, brighter then she had ever before seen them. Her last thoughts were of running for her master, and it was his hand that she felt touching her with love and compassion as all sense of the world faded away.

In the years that follow The Boy’s training intensifies, he and his dogs maintain the ultimate relationship of give and take and The Whaler becomes his mentor in earnest.
At eighteen he is running The Great Race as a rookie. It is the last race to be run for he has left his mark in the mushing world and across the vast Alaskan wilderness as none other before him. He has become the stuff of legend.
His is a strange figure. At once dark and foreboding, with his clothes hanging loose and flapping about his lean frame, a fiercely localized storm seems to shroud his character. At other times, he seems frail and oddly vulnerable, as if the slightest touch could disperse him upon the breeze like thistle down. His face is a dim white oval of scars and twisting sadness. His lead dogs, Legend and Titan, are always at his side. They move when he moves, and when he stops, they stalk near to hand, ready to do his bidding. Together, he and his dogs have made themselves into a weapon.

But this Race is like no other. In this race he and his dogs will face competitors that have won virtually unopposed. The forces of Nature, the Earth herself and the faces of comfortable ghosts from his past will all seek to enfold him in their embrace.

As stated in an interview written by Peggy O’Neill December 17, 2010 in the Independent Record, Jason Barron says of this story, It has been living inside me since I was a boy. Barron grew up in the bush of Alaska where survival was a way of life. He is a veteran of nine Iditarod races.

But readers least you think this is only a story of The Great Race be advised it is more, so much more. It is a story of determined triumph in the face of overwhelming adversity. Reading this will raise you up where you are acutely aware of that wellspring deep within us that longs to make us free. Ballad of the North is to be savored again and again for the sheer beauty of its characters and the landscape that surrounds their journeys.

Jason’s wife, Harmony Barron, an artist with a passion for drawing and painting, has completed three Iditarod races, mushed in other mid- distance races and won the 2002 Montana Race to the Sky. It is her illustrations that grace the pages of each chapter and the cover of Ballad of the North.

I highly recommend this rich, rewarding read for high middle grades and up.
Posted by Xena's Mom at 10:10 PM