When a woman introduces her blog: My name is Ree--I'm a desperate housewife.  I live in the country.  I channel Lucille Ball, Vivien Leigh, and Ethel Merman. Welcome to my frontier! readers immediately know that they are in for a humorous treat . Ree Drummond began chronicling her life as the wife of a cattle rancher in 2006.  By 2009 The Pioneer Woman  had earned the Weblog of the Year Award given at the Weblog Awards.  The Pioneer Woman Cooks; Recipes from an Accidental Country Girl was published in October 2009.  A series of blog posts became a book in February 2011 titled The Pioneer Woman: Black Heels to Tractor Wheels--A Love Story.  You just never know what you will discover when gathering information about the author of a new book. 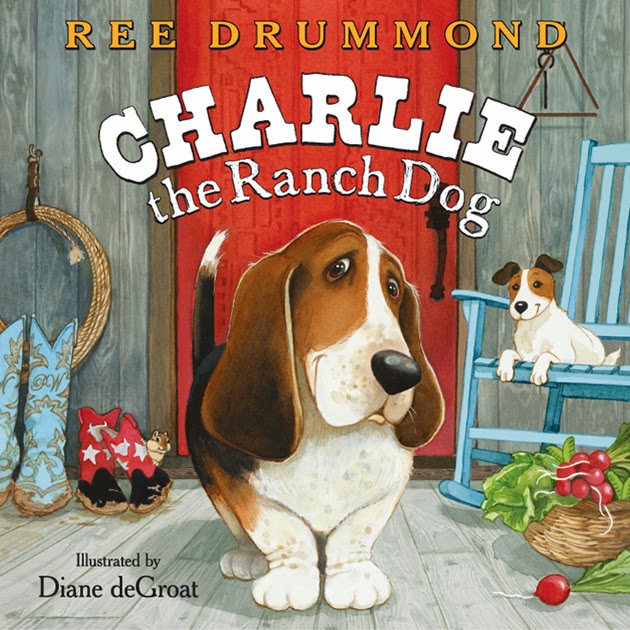 Now three weeks on the New York Times Best Sellers list, Charlie the Ranch Dog is Drummond's first book for children.  The droll tongue and cheek narrative found in her blog posts is present in spades as a day in the life of Charlie unfolds.

After Charlie introduces himself and his best doggie friend, Suzie, readers turn pages that compare their traits only to have Charlie tell them:   But all that stuff doesn't really matter anyway.  'Cause tall or short, slow or fast, tiny ears or floppy ears, there's plenty of work around here for both of us.

As Charlie relates the days events from getting up in the morning, to chasing cows out of the yard, to sniffing the porch steps for critters or helping Mama in the garden, it won't take readers long to figure out that what he says and what he does are two separate things.  In fact midway through-It isn't even lunchtime yet, and I've already worked harder than most dogs out there.  I think I'll just sit down and rest for a minute.  I think I'll just...ZZZZZZZZZZZZ...

It seems that when it comes to napping and food, especially bacon, Charlie is the champion.  When he wakes up from one of those short little snoozes only to find everyone gone, Charlies decides to take---you guessed it--another nap. But lo and behold those big floppy ears hear cows getting in Mama's garden and Charlie lets loose with a big howl.  What would this ranch do without him?!

Unlike Charlie's short legs this story is long on laughter and...love.  For it is obvious that despite his need for shut-eye Charlie has found a warm, cozy spot in this author's heart.

Diane deGroat began illustrating books for others in 1973.  After 20 years she wrote and illustrated her own book, Annie Pitts Artichoke.  Her first picture book was Roses are Pink, Your Feet Really Stink.  Fans  of those Gilbert books rejoice; she is working on her thirteenth book in the series.

Her artwork in Charlie the Ranch Dog is a true reflection of the playful tone found in the author's text as well as a clever depiction of what is really happening despite what Charlie is telling his readers.  Each one and two page spread reveals another small friend accompanying Charlie throughout his day.  Will readers find this furry companion?

I encourage you to follow the links for both the author's blog and illustrator's web site.  In every way possible way they are outstanding.