We Are Most Certainly Not In Kansas Anymore

While Christmas Eve is generally a night laden with anticipation for the joy that morning brings, few children remember it as the last time they will see their parents.  Kate, the oldest of three children is awakened by her mother:  "Kate"--her voice low and urgent--"listen very closely.  I need you to do something for me.  I need you to keep your brother and sister safe.  Do you understand?  I need you to keep Michael and Emma safe."  "What..."
"There isn't time to explain.  Promise me you'll look after them."  "But---"  "Oh, Kate, please!  Just promise me!"  "I...I promise."
As she makes this promise Kate looks up to see a shadowy figure silhouetted in the doorway.  The children are quickly placed in a car and whisked away from their parents.  So begins Book One-The Books of Beginning-The Emerald Atlas (Knopf Books for Young Readers, April 5, 2011) by John Stephens. 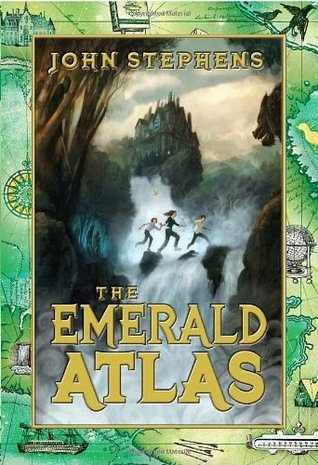 For the next ten years they are in and out of one orphanage after another.  Kate is determined to keep the promise made to her mother.  Responsibility for her siblings is done with love but it is a burden that she alone bears.  Studious, spectacle-wearing Michael, notebook and camera in hand, records what he sees in the world about him.  He is obsessed with dwarfs having read repeatedly  The Dwarf Omnibus by G. G. Greenleaf which was found tucked in his blankets after his parents' disappearance.  Tempestuous Emma, the youngest, is as outspoken as she is loyal.  Her stubbornness and tenacity are a mainstay in the course of events that unfold.

Miss Crumley, headmistress at the Edgar Allan Poe Home for Hopeless and Incorrigible Orphans, has put them on a train to a new home that is their last chance.  The location, reached by boat, is across a lake and through the fog to Cambridge Falls; a world near but not so near to ours.  To their puzzlement they are the only three orphans at this new residence.  In fact, they are the only children in the whole town.  Caretakers for this new home are Miss Sallow, who continually speaks to them as if they are French royalty, and gentle Abraham, a taker of photographs.  Mr. Stanislaus Pym, owner of this mansion on the mountain, appears and disappears with regularity.

While exploring the three children take the stairs into a wine cellar walking through a doorway that was seconds before invisible.  In a room they find a book, emerald in color whose pages are blank.  When a photograph given to them by Abraham is thoughtlessly placed in the book, the children are whooshed back in time.

The three initially watch in  horror as the truth about what happened to Cambridge Falls is revealed to them by the presence of the cold-hearted, vile witch, The Countess, her hordes of Screechers and her equally malignant secretary, Mr. Cavendish. It becomes crystal clear that Kate, Michael and Emma are part of a master plan put into play thousands of years ago. The fate of our world and that of Cambridge Falls is in their hands.

John Stephens has created a cast of characters finely woven through the threads of time.  Those elements that bring readers to fantasy, good versus evil, alternate worlds, magic, heroes and heroines, special characters such as dwarfs and a magical object, are not only present but so fully described the readers' world fades away to be replaced by the world of The Emerald Atlas.   A huge draw for readers will be the snappy, sometimes humorous but constantly heartfelt dialogue between characters.  Replete with gripping action, unearthly enemies, impressive allies, and the strong bonds of family, the genre of fantasy could ask for no finer representation.

There are three books and three children.  Only time and the pen of John Stephens will reveal which book will claim which child next.  Patience has never been one of my virtues when it comes to sequels.  Like the proverbial child on a trip, until we travel with these three again, my mantra will be:  "Are we there yet?"