You haven't seen a tree until you've seen its shadow from the sky. AE

Shelley Tanaka and David Craig combine their considerable talents to give readers a fresh look at the life of one of America's most remembered woman pilots in the book, Amelia Earhart: The Legend of the Lost Aviator. 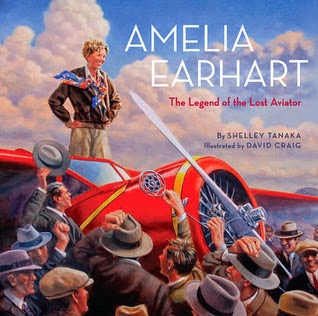 
Craig's skill at bringing people and places from history to life is attributed to his attention to detail and accuracy.  At his web site it states that he spends as much time researching a subject as he does creating the image.  He was the first recipient of Lynne Cheney's James Madison Book Award in 2003 for his illustrations in First to Fly:  How Wilbur & Orville Wright Invented the Airplane.  (Our elementary library media center has a copy of that book.  This book is currently in the collection at the middle school media center.)

Placement of his warm, vibrant paintings along with actual photographs as well as the partial map with a compass rose at each chapter's beginning beckon to the reader; the manner that was employed in laying out the design and position of the graphics under and around the text makes the reader feel as if they are reading a journal created by Amelia that commemorates and chronicles her zest for life and flying.

Leading off with Amelia's first sight of an airplane at the 1908 Iowa State Fair, Tanaka's conversational but well researched narrative (An extensive bibliography of books and articles, many of them by Amelia, and websites is included at the book's end.) encourages readers to enter into Amelia's world.  Each chapter is just the right length including insight and information that as pages are turned one's admiration for this amazing historical figure just gets bigger and bigger.  Actual quotes by Amelia and others are appropriately placed which increases the reader's sense that they are living in the same moment as the story.

Another technique utilized by Tanaka in this book, at which she is very adept, is side bars in each chapter that cover all aspects of flight and flying in general and as it relates to Amelia.  Shelley Tanaka is not without her share of awards for her contributions to nonfiction literature for children.  In 2009 The National Council of Teachers of English gave her the Orbis Pictus Award for this title.

In the epilogue Tanaka reveals theories on Amelia Earhart's disappearance which to this day is one of America's greatest unsolved mysteries.  But more significant in her conclusion she says: Perhaps her most important legacy is what she has to say to all of us-male and female-about having the courage to take on challenges and pursue a dream.  Think for yourself, she would say.  Figure out what you love to do.  And then go out and do it.

As a girl and young woman I grew up repeatedly hearing my Mom talk about Amelia Earhart.  At the time of Amelia's disappearance Mom was 17.  I can only imagine how young women of that time felt about a woman with Amelia's accomplishments.  She was an inspiration then and having read quite a bit about her myself continues to be so today.  Shelley Tanaka and David Craig's contribution to the literary world about her stands out far above the rest.