Another Side of the Story

Graduating from high school in 1969 and attending college for the next four plus years I can vividly remember the war in Vietnam; at least from the perspective of those of us at home who relied on the media and friends in the Armed Services writing letters to provide us with news and views.  What Newbery Award winning author, Cynthia Kadohata, does in A Million Shades of Gray is to give readers another perspective. 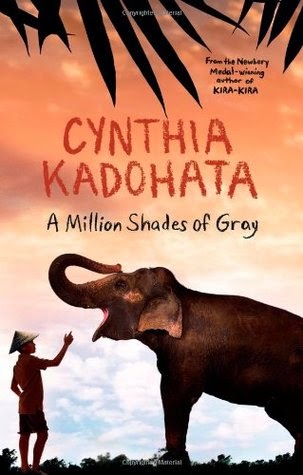 Set in the Central Highlands of Vietnam between the years of 1973-1975, Y-Tin is a member of the Rhade tribe, one of the thirty or so Dega groups that have been living there for hundreds and hundreds of years.  During the American occupation his father worked with the American Special Forces.  Many members of the Rhade tribe worked with the Americans but in Y-Tin's village only a few offered their services.  After the troops were removed from Vietnam, promising to return if these people needed their help, the North Vietnamese did retaliate.  The American troops did not come back.

In 1975 Y-Tin is 13 years old.  His life-long dream is to work with and train elephants even though his mother has him attending the local school.  He has been learning well under the guidance of another elephant handler, Thomas.

Each of these handlers have a special bond with their elephants.  But none is stronger than Y-Tin and his elephant, Lady who is pregnant.  Through careful research by the author we are introduced to the daily lives of the people in Y-Tin's village.  Farmers at heart, living in long houses whose entrance is reached by a ladder, these people lead uncomplicated lives surrounded by their extended families and friends.

Fear fills the village as word of the advancement of the North Vietnamese troops spreads.  Before the villagers have a chance to make plans and flee, their homes are overrun by these enemies.  Devastation descends swiftly and without rhyme or reason. Along with the elephants some are able to blend into the surrounding jungle.  For tortured days those caught in the village endure a nightmare existence.  Y-tin and a friend are able to escape from their captors but their relationship changes as circumstances force them to become what they must to survive.

Readers will find this piece of history informative, at times riveting and heartbreaking but ultimately a story full of hope and determination.  It should be read for all those reasons.

In an author's note at the book's end Cynthia Kadohata does give us inside information on her research.  She includes time spent with elephants at the San Diego Zoo and Have Trunks Will Follow.  Interviews were conducted with retired members of the United States Special Forces and Montagnard refugees living in North Carolina.
Posted by Xena's Mom at 1:17 PM