Gone to the Dogs..

﻿
When the oil painting of Adam Gustavson is combined with his eye for layout, attention to detail and gift for creating an atmosphere appropriate to a time period the results are noteworthy.  The book's endpapers portray an aerial view of two mining camp layouts in dusty brown tones.  On the title page Dorsey is pictured stepping through a rocky opening saddle bags across his back.  When readers turn the page a lizard is watching the tail and back of Dorsey move out of view.  In those few pages Gustavson is conveying that a journey is taking place. 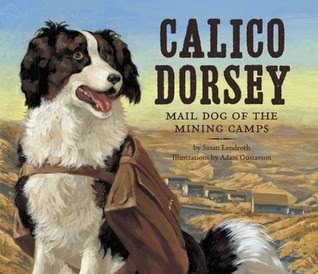 The story of Dorsey in this title, Calico Dorsey: Mail Dog of the Mining Camps, has been brought to readers with warmth, likely scenarios and just the right amount of facts by author, Susan Lendroth.  In the 1880s when the rush for gold and silver dictated whether a town would be built, Calico, California appeared.  At the time of this tale Everett Stacy ran the post office.

His brother, Al, discovered the border collie giving it a home.  Before long, Dorsey was a part of the daily life in Calico.  Later when Al went to the nearby Bismarck Mine to open up a general store, Dorsey followed.  What began as Dorsey disappearing for hours each day to visit friends in Calico developed into this dog actually carrying mail between the two mining communities.

An author's note reveals further information about the two brothers and the border collie that they trained to carry the United States mail as well as an original photograph of Dorsey.
At the Legends of America web site further information can be found about Dorsey.  By going to this Official Ghost Town of California web site readers can gain insight into the process of making Calico the California State Silver Rush Ghost Town.
Posted by Xena's Mom at 2:41 PM